Is (more or less planned) emergency overnighting with usage of hammock and/or canvas tent considered wild camping in Europe (especially in Germany)?

In many countries, such as Germany, wild camping is disallowed and fined, but if you don't use full tent, but only canvas to protect yourself from rain/insects, is it still in praxis treated the same and fined?

I'm not sure if canvas tent is the proper word, I mean something like that: 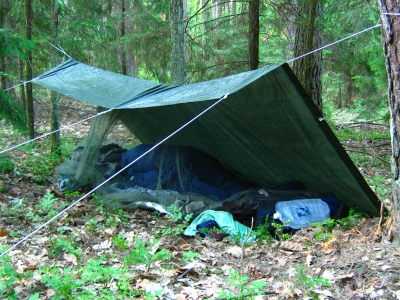 One option is to ask the land owners. In an attempt to answer your question...

According to the Outdoor Magazin:

Anyone under a tarp - a waterproof tarp stretched - stayed overnight, camping out and is in a legal gray zone. The night under the tarp also reduces the risk of being discovered and provides maximum enjoyment of nature, as it falls asleep and wakes up with green view.

BPL also has a thread on the topic that might provide you with some insight. Not surprisingly people do illegally wild camp as BPL user Christine describes:

I have stealth camped all over Germany (and rest of Europe) for many years now and never had any problem. But you have to be discreet. I always take care that nobody sees me, meaning you set up camp when it gets dark and leave early.

With my limited knowledge of German, I would personally consider other alternatives first. An altercation with a local with whom you cannot communicate with is not something I would look forward to.

I take my wisdom from these articles:

My experience is that if you stay friendly and don't leave rubbish things are OK and if someone finds you they'll usually wish you a nice tour. It is no criminal offense, so even if the police or a forest officer find you, they can fine you, but they don't have to.
I've been "cought" by french gendarmes once on a hiking tour. However, when we asked where we should walk given that it was dark already we were allowed to stay over night but we had to put down the tent so the gendarmes would not need to get into discussions with the motorized crowd that had had the same idea of a nice spot for camping (and had attracted the police in the first place).
(Though I know someone who was caught in a natural park outside the allowed places and had to write a "I'm-sorry-and-I-won't-do-it-again"-letter and someone else who was fined) However, if it comes to a discussion, my guess is that you'll have a very hard time to convince a forester that your tarp is really that different from a proper tent, and that you had to put it up because you were in an emergency (how come that night fell completely unexpected by a person who thinks so much in advance as to bring a tarp? And it is really hard to get properly lost in our small forests...). I guess the approach "Sure, we'll pack and leave immediately. Just where are we supposed to go now in the dark?" is far more promising.

Oh, btw: I call the activity on your photo "Planen-zelten" or "Zelten ohne Zelt" ;- ) the latter in reference to the famous "We even have to eat our oatmeal without oatmeal" [back translated into English from A Walk in the Woods]

78
Where in Europe is wild camping permitted?
8
How late/early should you pitch up/leave when wild camping in the UK/Europe?