How to prepare for and survive wildfire?

In some areas, such as the western US, wildfires are common during the summer dry season. "Fire safety" advice usually centers on not starting a wildfire, e.g. extinguishing or avoiding campfires. But what should one do if a fire breaks out near where one is hiking or camping?

I found this question, but it only addresses a single tactic that is at best a last ditch effort (and at worst increases the danger).

This isn't a direct answer to the question, but I want to point out that most ordinary forest fires pose little danger to humans. It is the relatively unusual crown fires which can be very dangerous.

In generally dry pine forests, like many parts of the western US, forest fire is a natural and relatively frequent (from the point of view of long-lived trees) event. Periodic fires clear out the understory and ground litter. The plants in these areas have evolved with this pattern of fires and have various strategies for dealing with it and even benefitting from it. The long lived trees have evolved means to survive such fires. Mechanisms include thick and fire-resistant bark, and shedding low limbs as the tree grows. If a area is swept by such a fire periodically, then the down and dead fuel is periodically removed and the nutrients locked up in them returned to the soil.

True crown fires are a different story. They are very destructive but also relatively unusual. We hear about them way out of proportion to the fraction of fires they represent. This is probably because a ordinary forest fire that stays on the ground and clears out the litter is not news-worthy. In a crown fire, enough fuel is burned on the ground in a concentrated area so that heat builds up much more than normal. This then causes the whole canopy to catch fire, which gives it access to much more fuel, which then causes nearby whole trees to catch fire, etc. These are the fires we hear about on the news and that blacken and kill whole stands of trees.

Crown fires happen when a normal fire hits a area where understory litter has built up. This is usually due to human intervention from stopping the normal understory fires. Of course these large fires do occur naturally too since fires are very spotty and some area may not get a small fire for 100 years just due to chance. Human activity has greatly accellerated that chance.

Here is what a ordinary understory fire looks like: 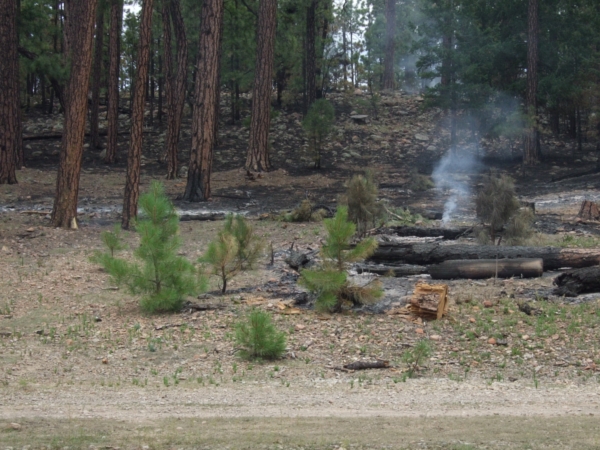 I came accross this fire on the south flank of Eagle Peak in Western NM on 2 Aug 2009, although I doubt it made any more than the local news, if that. The fire was slowly spreading by smoldering thru the leaf litter on the forest floor. When it hit a dry and down log, it would flare up a bit locally, then die down again as the log was exhausted. This picture is a good representation of how spotty fires are. You can see from the darkened forest floor where the fire had been and how various patches were skipped for whatever reasons. Note also how the older trees, ponderosa pines in this case, are basically unscathed, even if growing in the middle of one of the burnt patches. Even a few of the small trees in the burnt patches seem to have survived.

The smoke is coming from where the smoldering leaf litter reached a few down logs, which then caught fire with real flames. However, the few logs in this location aren't enough to cause a raging fire. They will slowly be burnt to ash over the next day or so, with the fire front meanwhile moving on. You can see a horizontal white streak at the center of the left edge of the picture. That was a log that had already been completely burnt, with the only thing left being the streak of lighter-colored ash.

I could easily and safely walk all around this fire. Here is a stump that is burning rapidly enough to show flames: 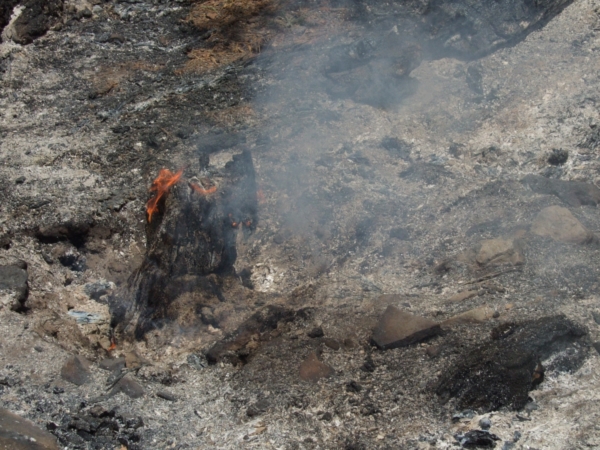 Note that most everything around it has already been burnt, so this stump will burn to ash and then the fire will be over in that specific location. As you can see, I could walk right up to this without being in any danger.

I did discover one danger from this fire that I wasn't previously aware of. Stumps like the one in the second picture eventually burn underground for a little ways too. Most of the material then gets removed as combustion gasses, so almost nothing is holding the ground up where the stump used to be. I accidentally stepped on one of these and sank in up to my knee. It was easy enough to get out, but if the fire had been at that stump more recently I could possibly have gotten burnt on my leg. Fortunately it was only "hot", and a few seconds in the hole before I could pull my leg out did no damage and was not long enough to hurt.

You touched on one thing: fires are often seasonal. Want to avoid fires in the Canadian Rockies? Come in the winter time. Want to risk smoke inhilation in the BC interior, come visit in August. Find out what the situation is in the area you are visiting, for the extent of your visit. Most parks have fire safety levels that clearly indicate whether the fire risk is low, medium or high. Find out if weather patterns have been unseasonable (drought, lake of rain the previous spring, etc.). Plan your trip for after a solid rainfall, you'll probably have a better experience overall, there will be less dust if nothing else.

The best way to deal with a forest fire is to avoid it. Put distance between you and the fire. Fires can expand exponentially very quickly: This week where I live a fire that had been burning for weeks went from 90 hectares to over 400 hectares overnight. In 2001 the Mount Shark fire wen from 600 to 2,400 hectares (that's 24 square km) in 2.5 hours. So distance isn't enough, you need barriers: mountain ranges, lakes, highways, all of these can help to separate you from the fire.

In regards to precautions: avoid the use of fires when the fire danger is high. If you're in the back country use a stove instead, or keep fires small and constantly monitored. Set aside water and make sure the fire is completely extinguished. Rake through ashes and add additional water, ensuring that there are no coals left. Here's 10 steps on how to put out a campfire.

Get an understanding of underlying wind patterns in a region, if the wind comes from the west, then the further west you are the less likely you are to be downwind from fire. Realize that in mountain valleys prevailing winds are more likely to be superseded by the shape of the valley.

On the ground, the best ways to detect fire are by sight and smell. Columns of smoke can be seen for over 50 kilometres and rise up from the geography before traversing the sky. Clouds will tend to be darker, and when obscuring the sun will cause the sun to glow orange or pink. The smell of fire can carry just as far. Don't panic if you smell or see smoke, the fire itself may be dozens of kilometres away and of no risk to you. If the smoke has particulate then you are much more at risk, as there is a higher chance of cinders which are bad for your health and can also start further fires. Cinders are a clear indication that the fire is nearby and should be cause for evacuation.

To fire, wind is both a means of transportation and a source of fuel. The best route when near a fire is to remain upwind with a barrier between you and the fire in case it shifts. Moving towards water, downhill, and upwind are all options when confronted with a nearby fire. Moving into the open and away from fuel sources (forest are sources of fuel, as is brush) further improve your chances: think rocky plain, parking lot, lake, that sort of thing. If the fire has been going on for a while then going to an area that has already been burnt through offers some reprieve although there will be residual heat and increased risk of exposure.

I can't speak of survival tactics when overtaken by fire, but it's worth mentioning that in the US forest-firefighters carry heat resistant shelters in the event that they are overcome by fire, however in Canada heat resitant shelters aren't used as they believe it creates a false sense of security which leads firefighters to put themselves at great risk.

Not the answer you're looking for? Browse other questions tagged hiking safety survival fire backcountry or ask your own question.

9
How do I identify dangerous, marshy land?
9
How to prepare for a 1 day 10 mi hike around Gettysburg, PA?
18
What formation to best survive a flood?
9
How can I survive multiple days in cold environment?
18
How do you survive getting towed under a log jam?
8
How can people survive really cold nights outside with minimal equipment?
8
How can I prepare my body for a relatively hard hike?
5
How can I prepare physically for a long distance thru-hike such as the Pacific Crest Trail?
9
How to prepare on hiking routes?