Trek-able peaks in the himalayan range

Recently climbed a summit name Stok Kangri(6153m) in Leh, India. I wanted to know if there are similar high altitude peaks which can be climbed without much of mountaineering expertise required in the Himalayan range.

Haba Xueshan (Haba Snow Mountain 哈巴雪山) is a commonly summited peak here in Yunnan, China, at the eastern extent of the Himalaya. It's not as high altitude ("only" 5396 m) but it has high prominence (1794 m), and is situated picturesquely above Tiger Leaping Gorge. I understand that people summit without a lot of expertise, but it requires overnighting and a guide. It has the additional advantage of being easy for foreigners to travel to (fly in to Lijiang or Diqing airport via Kunming with no need for special permits), unlike many peaks in Xizang (Tibet), and in Tibetan areas of Sichuan.

Haba Xueshan (left), with Yulong Xueshan in the foreground and the upper Yangtze River below

It might be both an obvious choice and not a "real" mountain, but what about Kala Pathar, the "black rock"?

It's a 5545 meter hill facing Mt. Everest, and is the final destination of the Everest Base Camp Trek. Despite appearing unimpressive from Gorak Shep (the last and highest tea house in the area), it's still a harrowing hour or two to get to the top. The view of Everest is great, and the views along the nine day journey from Lukla, the nearest airport, are also fabulous.

Getting back to Lukla from Gorak Shep and Kala Pathar can be done in a lot less time - two or three days, even. There's also the possibility to cross over to the Gokyo Lakes region by going over the 5370 meter Cho La pass. I liked the Gokyo area, and the pass, though difficult, was worth the effort, since it means you return to Lukla by a different route.

The area is very touristy and often crowded, but the atmosphere is pleasant and there's a good spirit of camaraderie among the tourists. 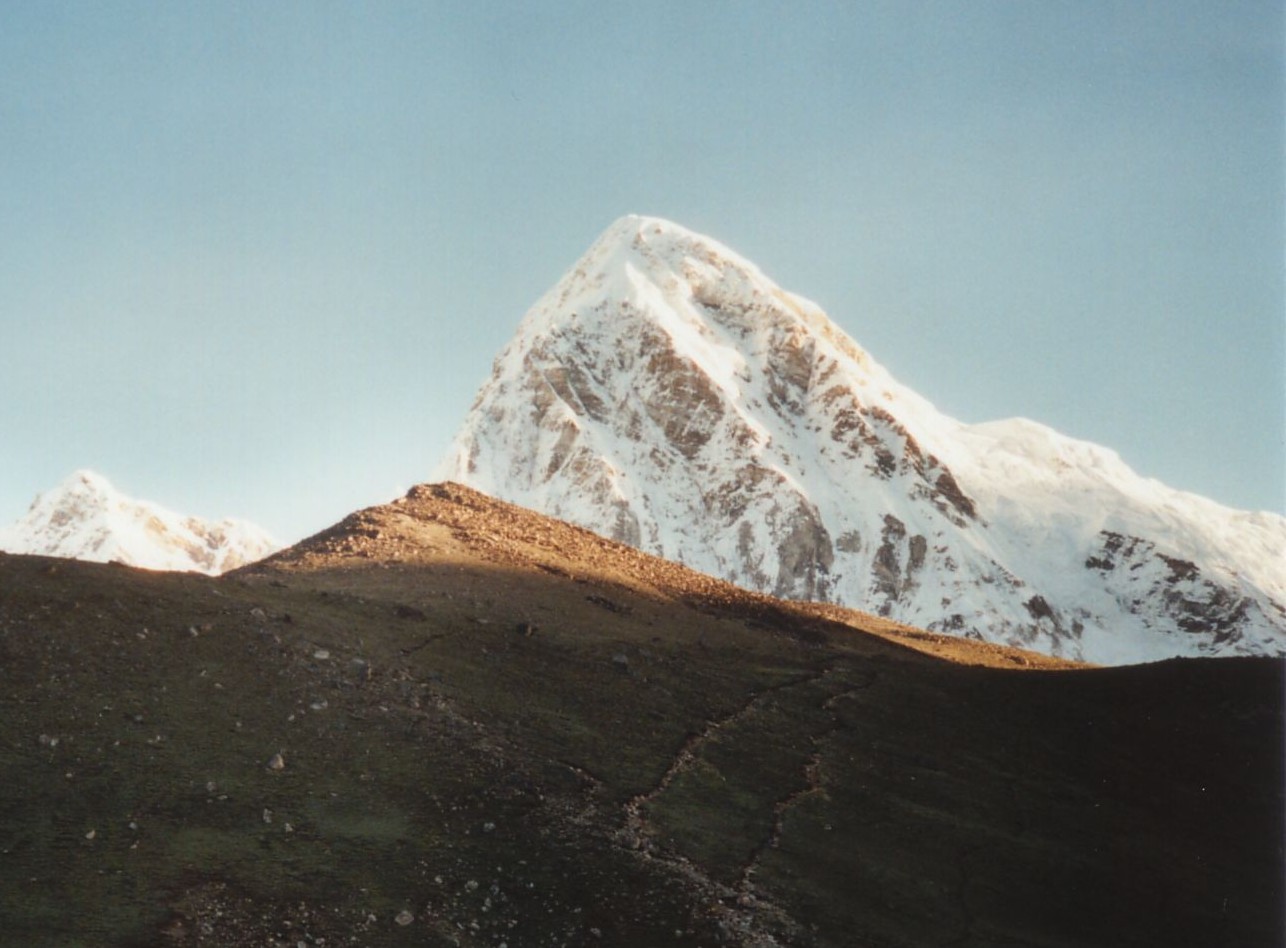 In Nepal there is Thorong La which is a high altitude pass in the Annapurna that is doable without, in my opinion, much experience. It is fairly popular trek and you will likely encounter organized groups even during the off season. There are accessible trekking routes with accommodations and progressive acclimatization.

You will need to acquire permits and may want to consider hiring a Sherpa.

I climbed the Stok Kangri some years ago. I went to Langtang (Nepal) last March/April. The Tsermo Ri is at an altitude of around 4900m (if I remember correctly). It can be walked up easily without special equipment from Kyanjing Gompa. It is a day trip from the Kyanjing Gompa village. The summit might not be as high as the Stok Kangri but the view is really worth the walk!

In the same Langtang valley, the Yala Peak is a trekking peak and can be done according to the people we met on the trek without climbing. But you might need porter and guide for the route... Especially if like this year the snow is still covering the route.

I had a chat with a local guide during my last trip and he said that the road for jeeps to the Thorong La was finished. I saw the construction work in a previous trek in the Manang Valley in 2006... So the Thorung La might not be interesting for trekker after this season... Unfortunately. This is sad, the trek was really beautiful.

There are few peaks like : Ekdant - 6128 mtrs (A name for Lord Ganesh), Kartik - 5113 mtrs(named after brother of Lord Ganesh). I had planned for these two on a single trip, though I could not execute the plan. There is Parvati Parbat (6,257m) above the Satopanth Glacier. I have the Himalayan Journal of year 2009 which has expedition reports and lots of useful notes on above said peaks. Try and get a copy of that from Himalayan Club. Or even this link here may come handy. But, the above are less trekable than Climbable peaks.

As of now, if you are looking for Absolute Trek'able thing around Himalays, try and do Mt. Everest Base camp trek from Luk'la, Nepal. Its an amazing experience to have! I have planned the same in next year August.

EBC is not technically difficult at all, but the Altitude and Weather part together make it more challenging. Its also about the distance you cover. In the EBC trek, you can summit Gokyo Ri as well, Now of Gokyo Ri Trek, I've heard so far, is tougher than Stok Kangri.

One more option, which is less Trek'able as you expect, is relatively difficult, is: Doing a Trek upto the Advance Base Camp (ABC) of the Saser Kangri in East Karakoram. Set your Base Camp at 4750 m and then an Advanced Base Camp at 5360 m. If you are good with ration and equipment then you can also try and reach to Camp 1 at 5880 m. Beyond Camp 1 (usually called C1) its no longer easy. I believe with the kind of thing you are looking for, reaching ABC of Saser Kangri is a good fun. Beyond that, you may choose whether to continue to C1 or fall back.

Or you have route like, Kanchenjunga Base Camp, Annapurna Circuit.

Have a look at this site as well.

There are a lot of trekking peaks with altitudes in the neighborhood of 6000 meters.

The Indian Mountaineering Federation maintains a list of these here. You will in most cases need a permit. Here is a screenshot of the list of peaks 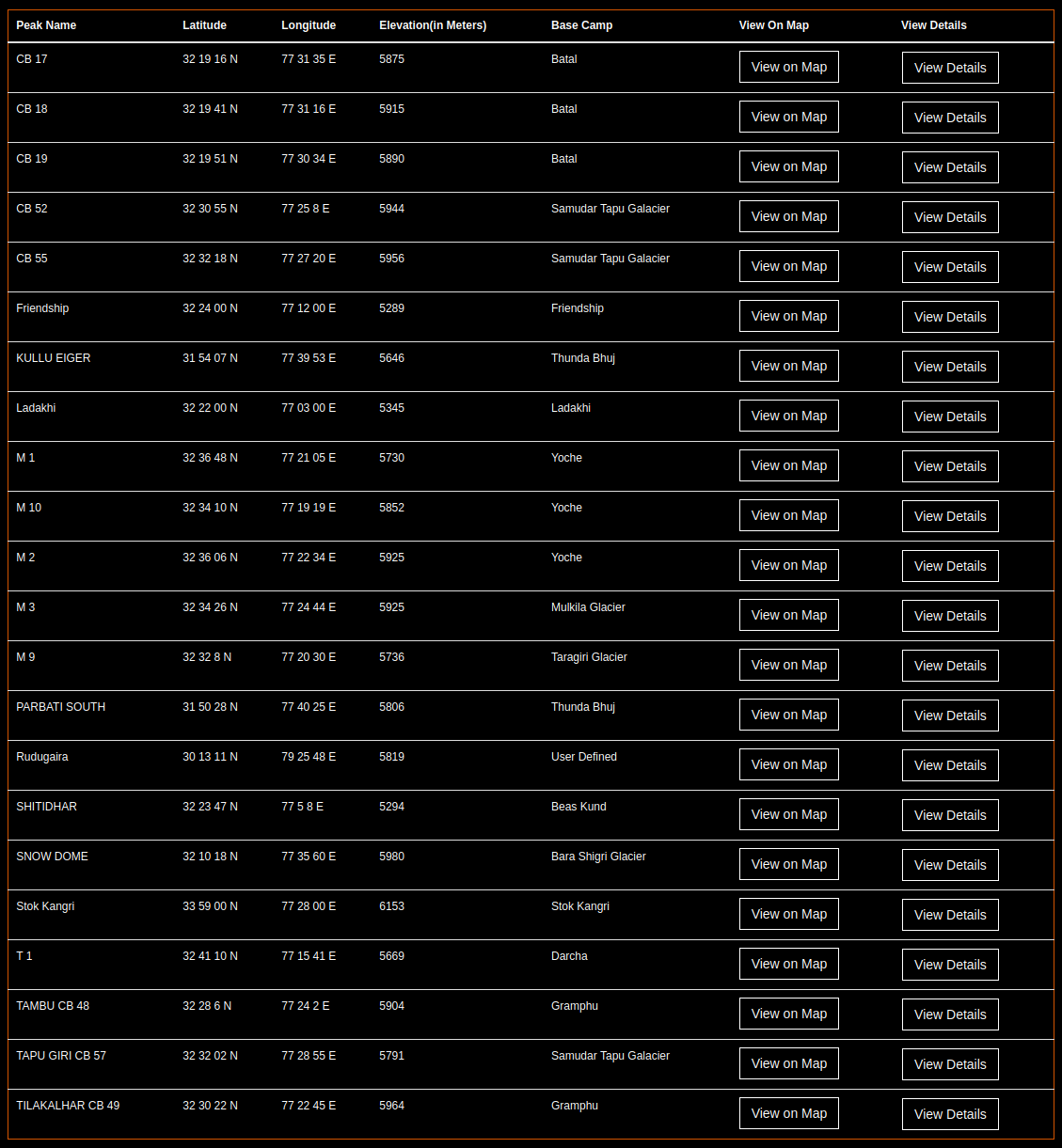 Also be aware that regardless of whether the peak is technical, you will need to be able to tackle the hazards and risks inherent in mountaineering.

In recent years there have been many accidents (and deaths) due to the trekkers/climbers being unprepared, the guide agency being incapable/unqualified, etc. So do your research before venturing into the mountains, pay careful attention to weather forecasts and advisories issued by local governments. Be prepared for circumstances worse than forecast. Rescue in the Himalayas is not as feasible as it is in the Alps (i.e. don't count on being rescued (alive) successfully), there are no fully prepared rescue teams sitting at the base camp waiting to go up at a moment's notice to save climbers from bad decisions. The only bit of good news is for trekkable mountains in the 6000 meter range, it is still possible to mount a rescue, unlike for 7000-8000 meter peaks.

Not the answer you're looking for? Browse other questions tagged trekking himalaya or ask your own question.

13
6 day trek in Nepal Himalaya
13
Trekking in the himalayan region
17
What temperature to prepare for on Everest base camp trek?
10
How to grade a trek?
11
Week long trek, how far each day? pace?
3
How much would a base camp shower cost in the Himalayas?
11
How can I be sure that I'm ready to do the Three Peaks Challenge?
5
Do I have to have a guide for the Milam Glacier trek in India?
5
Himalayan mountaineering - pre-monsoon vs post-monsoon