What do you do if you see a cougar?

Hiking on the west coast of British Columbia, there are likely to be cougars around the trails. What do you do if you see one?

I actually had a site bookmarked for this very reason that provided some good, sound advice. I've always heard that a cougar (mountain lion) generally doesn't let you see it unless its considering attacking.

100 yards away or more that is unattentive to you

Probability of risk is slight, provided your response is appropriate.

50 yards away with its ears up and attentive to you

Less than 50 yards away, staring intensely at you, or hiding;

Probability of attack is substantial.

Intensely staring, crouching and/or creeping toward you

Probability of risk is serious if within 20 yards.

I think these signs in California and elsewhere describe it quite simply: 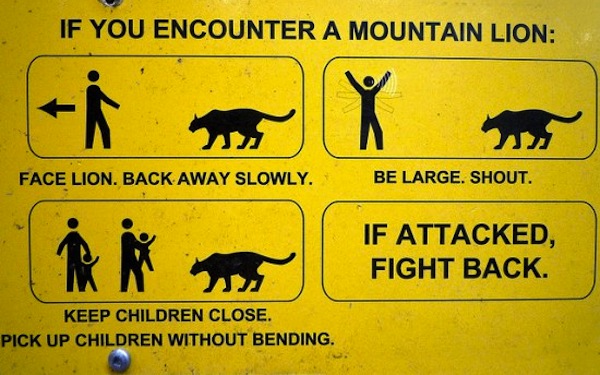 This video is quite a good instruction.

But beware! This strategy might not be valid for other beasts of prey, such as lions. In a video which is now deleted, a man is instructed to be quiet and stay low not to agitate the beast. Also, the man in this video is staying low (in fact, he's almost lying) and threatening the lion with toilet paper (!) if necessary.

18
What are the consequences of — illegally — using a 446 MHz PMR in the North American wilderness?
8
Shoulder season backpacking near Whistler (early June)
14
Running in bear country
10
Are there any possible telltale signs along a water's edge that it would be a good spot for gold panning?
9
Where can we see genetically pure American Bison, including Yellowstone National Park?
8
What is the difference between hiking boots and “hunting boots”?
5
Hiking and camping with medium size dog and keeping safe from mountain lions
2
Was the young cougar who attacked a runner recently in Colorado likely to have been old enough to live independently of its mother?
6
What kind of sea creature leaves this skin/shell?