How dangerous is a band of coyotes to a lone, unarmed human?

There's a delightful thrill to the call of a band of coyotes when you're alone in the dark woods. Do they present a danger? That is, have healthy coyotes (that is, not rabid) been known to attack or show aggressiveness to a lone human?

In general they are not considered dangerous because they rarely attack humans. You should not run away from coyotes as they will consider you a prey if you do. Under extreme circumstances they may circle an individual or a group. Making noise generally keeps them at bay or at a distance.

In 2009, there was, unfortunately, a fatality in Cape-Breton Nova-Scotia. This was the second recorded fatality in North America.

Coyotes are wild and generally avoid people. However, they should be treated as potentially dangerous. Do not approach a coyote.

The attack in Cape Breton is the first case of this nature in Nova Scotia. There was a fatal case reported in the United States (California) in 1981 (Timm, Baker, Bennett and Coolahan 2004).

Coyotes in Eastern Canada are known to be bigger and are sometimes called coyote wolves (locally) in opposition to their smaller counterparts.

A few points to add here:

Coyotes are not know to be aggressive towards humans. But always remember that coyote is a wild animal. It is not domesticated and hence it's very difficult say with certainty about the behavior.

Coyotes are know to attack dogs, sheep and other livestock. So yes, they can bite. If not you, your dog maybe?

Any animal, when it loses the fear of humans, can act aggressively. This is aggravated by humans feeding the wild animals. One quick example would be the feeding of monkeys that is done in many south asian countries and in south africa. Coyotes are similar w.r.t the fact that they almost coexist with humans in urban areas now-a-days.

Hence, my advice would be, know where the boundaries are and stay well within them. It helps not only you(and possibly your dog) but also the wild life out there. And calling out to evoke a response? Well, I wouldn't really do that :P

Coyotes now live in our area in significant numbers. There was a den on our property this winter, and a few months ago there were four pups romping around in our back yard. We hear them howling pretty much every night.

I've been in the woods and in open fields with coyotes around and never felt threatened or considered it a problem at all. In fact, I think they are cool to watch, particularly the pups. Coyotes are very aware of their surroundings, and they will not let you get closer than about 50 feet. In all cases when I was closer, the coyote ran off when it saw me. 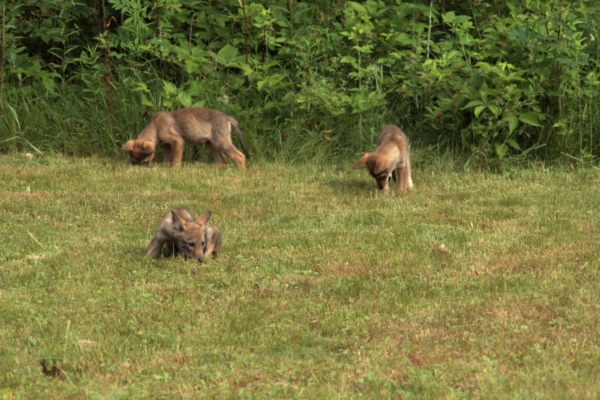 Here are some statistics on coyote attacks versus dog attacks in the US, on a per-year basis. (See notes at the end on how I got the numbers.)

In the United States, a lot of the interactions of coyotes with humans happen in the Los Angeles area, due to the large human population and a large interface between suburban housing tracts and nearby open-space areas such as the Angeles National Forest. Many Angelenos believe that their missing cats and small (<20 lb) dogs were killed and eaten by coyotes, but there is no way to verify this except in the rare case where people see a coyote kill their housepet and carry it off. It's likely that many of these pets actually died because they were hit by cars, or wandered away and died of thirst.

Coyotes tend to be most active in the times around dawn or dusk. They have puppies in the spring, and spring and summer are their denning season. During this time, they tend to be very defensive of their dens, and they may be active more during the day. A very common den-defense behavior is for the adult coyote to persistently follow an intruding human, dog, or horse. People may incorrectly interpret this behavior as evidence that the coyote is stalking them as if they were prey.

Common-sense precautions against coyote problems are the same as the ones you would take to avoid hassles with other wild animals such as raccoons. Don't leave lids off of garbage cans. Don't leave dishes full of dog food outside. If you have pets, make sure your yard is well fenced.

Notes on how I got the numbers:

Sources of information on den-defense behavior:

Just today I had a very interesting time watching a coyote (while it watched me) at the golf course across the street from my house in Oregon. S/he wasn't at all aggressive, but wary enough of me to not be seen as a threat to me (for example, the coyotes down in California, where I live outside of summer, are completely unafraid of humans, to the point of it being unnerving). I got within forty feet of it, and it watched me from a rocky outcrop. I also acted very submissive, not meeting its gaze and at one point even lying down to expose my belly for a few seconds. However, when I left I didn't once turn my back to it, just in case it decided to attack for whatever reason. I think that by acting like the animal, and treating it with respect, while being responsible for your own safety, you can observe them for quite a while (in fact, the only thing that bit me this evening was a fire ant. Ouch).

In short, if the coyote isn't absolutely starving or rabid, and you don't threaten it, then no coyote is automatically "dangerous," though you should always be wary, as all animals can be unpredictable.

I live in NE Ohio. We have coyotes in a number of the local parks here including the Cuyahoga Valley National Park. The only warning the park service gives is that you keep dogs on a leash. They also request that you report any aggressive behavior. The rangers and naturalists I talk to have never had an issue with one except where someone has run their dog off a leash. If dogs wander into the woods away from their owner and a coyote sees them, there is a chance the dog will be a meal - especially if the pet is very small. But, that is the owner's responsibility.

I have monitored bird nests for a volunteer program off-trail for the past few years. I have seen coyotes on many occasions. I have even seen small families. I make sure the coyotes see me so they aren't startled. I have only seen curious coyotes from time to time that stop to look at me. Most run off when they see me. Now, if you are in some remote area injured, on the ground and bleeding, maybe something could happen. If you are near a den, a coyote might be aggressive. But, most dens are well-hidden and far away from where people go.

I've lived in coyote country for most of my life and I've never even seen one. I've heard them, but never seen them.

When I was a kid, I used to wander around the ranch I lived on in Santa Cruz with two golden retrievers. One of them was a male. He was a massive, powerful beast of about 90 lbs. Golden retrievers have a reputation for being friendly, and that's generally true, but the males can also be fiercely protective of family members, especially small children, and they are very powerful dogs.

The coyotes used to come near the ranch at night, but they never came close to the house. I think that they knew that my dog was too smart to let them lure him out into the open, and if they tried to invade the back yard, he would kill them one-by-one.

Not the answer you're looking for? Browse other questions tagged safety animals coyotes or ask your own question.

9
Does it help to play a fake sound when confronted with a wild animal?
5
Are urban coyotes a danger to small children?

21
What steps should I take if someone starts sinking?
20
When/Where do foxes attack humans?
11
Can you tell the gender of a chipmunk from a distance?
8
Will a live clam on the beach have a better chance of staying healthy if I put it in the water?
19
How to deal with dogs on public hiking trails?
10
Is Germany or any of Europe really rabies free?
4
How can I tell if there's a camouflaged octopus in a coral reef, so I can keep from disturbing it?
3
How do you overcome a preventative fear of dangerous wildlife