How to use a Rap Ring

I have never used a Rappel Ring before but I am told they are really useful.

Apparently, if you're trying to rappel in a situation where you have to leave gear at the top to get down safely: use a Rap Ring.

How do you use a Rap Ring to rappel? (I would appreciate images of any complex knots or gear setup involved.) 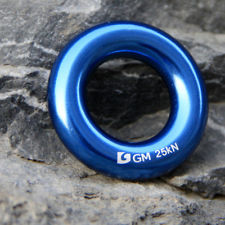 To make sure you don't lose the rope, you go through the usual procedure of tying the middle of the rope to something before you throw the ends down. Then before you rap off, you remove the knot so that you'll be able to pull the rope down at the bottom.

All you're leaving behind is the webbing and the rap ring, both of which are cheap to replace. Having the rap ring lets you avoid leaving behind a locking biner, which is more expensive. Sometimes you will see anchors that have been permanently left in place (e.g., on canyoneering routes), and what's left behind is a rap ring.

I would like to point out that in my line of work, we have retrievable ring and webbing anchors. They're called ring and rings. They probably wouldn't work in every circumstance, but i know that they would work in some. Just look up ring and ring friction savers.

Not the answer you're looking for? Browse other questions tagged gear rock-climbing trad-climbing or ask your own question.

11
“Tag line”/“pull cord” for multipitch trad: what kind and when needed?
12
Is this “dry suit cutting wrists” story realistic?
17
How can I safely practice trad climbing?
5
How to visually identify a rap hanger?
11
How to safely train for and grip pockets?
13
Is using ultralight gear possible without sacrificing safety, comfort, or skills?
6
What do you do when you're rappelling a halfed rope and you run out of rope on one side?
6
The dangers of simul-rappelling
5
Is it safe to depend only on a prusik?