Effective measures to minimize the damage due to Snow-blindness?

I was reading the novel: No Way Down by Graham Bowley, which is a detailed account of August 2008 K2 tragedy. There was a survivor named Wilco Van Rooijen, who eventually was rescued up somewhere between camp IV and camp III. He was suffering from snow-blindness, which contributed majorly in he getting disoriented.

I wonder what could be done at such altitudes where you are absolutely far from any medical facility/assistance, and probably need to carry on a little further down in order to get at least evacuation by air.

What are the symptoms and what are preventive measures and what can be done in order to limit the damage?

In case of need for rescue, the only option is to prevent further exposure to sunlight and get down to a lower altitude (cover up the eyes with goggles). I personally don't know of any medicine which helps with snow blindness. Also, unknown to many is that this can occur to even those who do mechanical arc welding without protection to the eyes. Snow blind is a term which has developed due to the prevalence of this type problem caused by the UV reflected by snow.

If you'd lost, broken or simply didn't have any googles, I know in the days before effective UV protective eyewear, explorers would wear goggles with thin slits cut into them to reduce the amount of light entering the eye. In an emergency situation you could probably knock this up with a knife and some simple materials. How effective it would be, I don't know but could be worth a go.

Native inuit have used this method for centuries: 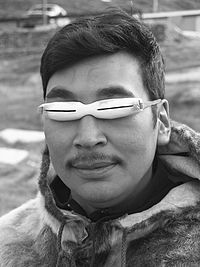 Not the answer you're looking for? Browse other questions tagged safety high-altitude or ask your own question.

17
At what point do I need snow goggles or glacier glasses when hiking?

7
How can I minimize the risk of tree wells when backcountry skiing?
5
What's the safest way to hike up a steep slope in deep snow?
6
Under what circumstances would I wish to extend the handle length of a snow saw?
25
Are there any natural materials found in the wild that can be used as an effective sunscreen?