I resumed climbing a couple of months back after a gap of a couple of years. After spending a month of quality time at the wall regularly in order to get back in touch, I have started to try different routes that are a bit tricky and a bit exerting so that sometimes I have to push it a bit harder than normal.

I first found myself struggling with cramping fingers and I even asked a query here.

And then during conversations with different climbing people, I heard that a lot about how climbers push too hard and destroy their finger pulleys: 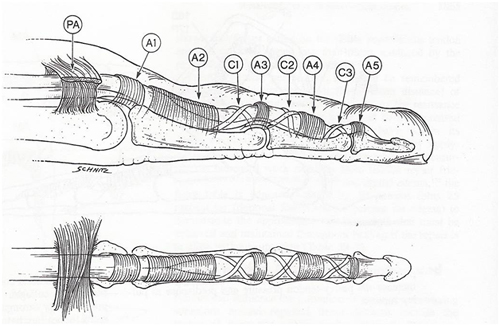 I do feel a little stress and pain with my fingers, and I am damn sure that its definitely not the Cramping of Fingers.

I do feel perfectly fine during early hours of climbing, provided that I warm up pretty well and regularly. I do feel better when I stop climbing, but for a brief time of about 10 minutes I find it difficult to pick up small things, or squeeze something, cycle brakes hurt the most, and the pain gradually subsides. I am not taking any sort of painkillers as of now, and I don't intend to.

Rather than try to answer the personal part of your question, which as Liam said needs a doctor's attention to answer properly, I shall reply to the more general title:

In an absolute sense I do not believe it can be. In a relative sense it is caused high stress on these "pulleys" so avoiding hard use of your fingers, such as climbing, would be a way to (likely) avoid such an injury. Of course that's not very helpful. In my opinion walking the line of climbing hard yet avoiding injury is something you must do for yourself, but seek as much guidance for the journey as possible.

Anecdotally an Achilles tendon rupture seems to come as a surprise to most people who experience one. I have seen several videos of such a rupture happening and often I could not tell that there was any unusual stress at that specific moment. As an example Misty May suffered an Achilles rupture while participating in Dancing with the Stars, weeks after winning Gold at the Beijing Olympics; I doubt it was the most stressful thing she had ever done but apparently the tendon had had enough at that point. If the largest tendon in your body can let go without warning I think it is reasonable to deduce that the tiny ligaments in your fingers can too.

However, there are a number of signs and behavior patterns that may lead up to the event. The book One Move Too Many: How to Understand the Injuries and Overuse Syndroms of Rock Climbing by Dr. Thomas Hochholzer and Dr. Volker Schoeffl describes pulley tears and ruptures as well as many other climbing injuries and overuse syndromes. That book is probably your best resource outside of a personal visit to a sports physician specializing in climbing. Unfortunately it is hard to find.

Quoting the introduction to overuse syndromes, emphasis mine:

If you do not keep a balance between what is reasonable for your body and what is excessively stressful for your body, you will develop and overuse syndrome. We refer here to overuse syndromes as being those injuries that take time to develop, usually because you have pushed yourself so hard that a number of very small injuries are accumulated in the tendons, tendon sheaths, and joints, and these connective tissues do not develop at the same speed as the muscles placing stress on them. Serious overuse syndromes with continuous stress on the injured area can lead to irreversible defects. However, most overuse syndromes and be treated and cured if detected early and approached with the right therapy.

Quoting the section specifically referring to the pulley rupture:

Most climbers tell the same series of events that let to the injury:

Notably crimping is very hard on flexor pulleys because the tendon is otherwise unsupported: 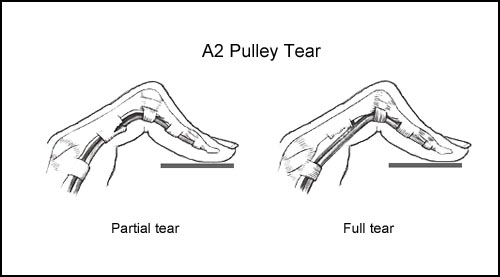 By training open hand strength and using it as much as possible you minimize stress on the pulleys.

... Bouldering, where the crimping position is commonly used, is especially stressful on the fingers and their connective tissues. The symptoms associated with tendovaginitis and a pulley rupture are quite similar, so the pulley rupture must be excluded before the tendovaginitis diagnosis can be reached. ...

The first generation of holds was in no way ergonomically designed. The first hold makers tried to recreate the rock, so they put irregular edges, sharp pockets, and shallow crimps together in their designs. Generally, on smaller hold, the fingers had to be in a crimped position in order to maintain a grip. Injured fingers were often the result. Since then, athletes, sports science, and the manufacturers have come together and recognize that a hanging finger position, a position on where you are on a more "slopey" hold, is just as good for developing strength but much safer for the hands than the crimping position.

And further, emphasis again mine:

The hold that puts the least stress on your finger tendons is the one that allows the most contact between the pads of the fingers and the surface of the hold. That is to say, the more of your fingers and the more of each finger that can bear weight on a hold the less stress there will be on any single tendon. The position with the least amount of strain, as well as optimum strength development for the flexor muscles, is a slight hyperextension of the wrist on a large sloping hold.

There is a lot more in the book, including information that may help you answer the bulleted points in your question, but I cannot quote the entire thing here.

I'll quote a bit more because I think it's important information for you. Emphasis again mine:

Technically, tendonitis is the inflammation of the tendons, while tendovaginitis, which is more common, is the inflammation of the tendon sheaths. Remember that the tendons, the tendon sheaths, and the ligaments (pulleys) form a functional unit. When stress is placed on those tendons, it is also placed on the sheaths and pulleys. ... This inflammation of the sheaths constricts the tendons, which impairs their movement and thus adds to the irritation. Adhesions will follow, which will lead to a narrowing of the tendon sheath. The long-term consequences are that the narrow sheath is easily inflamed thus regularly reproducing the effect. Tendovaginitis is about the worst vicious circle a climber will face!
...
After suffering the condition for a couple of weeks a noticeable grinding or cracking sound might be heard. This should not be ignored! If the injury has reached this point it should be treated by a physician. Without treatment it will most likely become permanent, or at the very least, a re-occurring problem. A bad case of tendovaginitis can restrict your hands so much that your everyday lifestyle has to be altered. Try going through life without being able to pick up a spoon!

The book lists these symptoms of tendovaginitis:

It is important to point out again that:

The prescribed treatment for these two conditions is fairly similar: immobilization for 1-2 weeks, followed by rest, then therapy, before resuming climbing, but the pulley injury requires far more rest (the book says "no climbing for 4 - 16 weeks") and severe cases require surgical repair.

Not the answer you're looking for? Browse other questions tagged rock-climbing climbing prevention training injury or ask your own question.

27
What can I do to help relieve joint pain in fingers after climbing?
39
What hand and finger exercises help with climbing?
25
Keeping the things interesting in a small climbing gym
17
Does sandpapering finger tips improve rock climbing?
20
How do I get my fingers and toes warm before rock climbing at cold temperatures?
16
How can I build a board to mount climbing holds in my house?
11
Should I do exercises for finger strength as an intermediate, heavy climber?
1
Influence of little finger length on climbing performance