Why should the angle in a rope attached to two anchors be 60 degrees or less?

This question asks how to set up a top rope anchor. It states that No angle of tension shall exceed 60 degrees. Why?

The diagram shows three situations that are easy to understand without knowing a lot of math or physics. 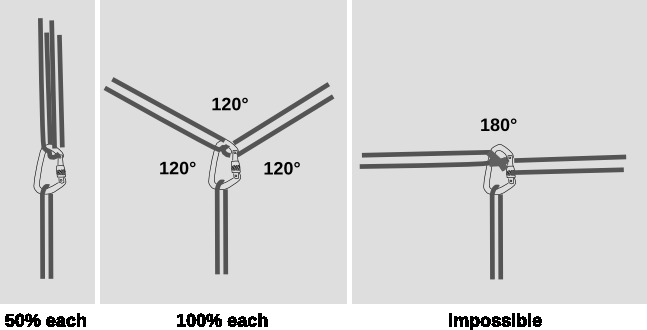 In the first example, the angle between the anchor strands is zero. Both anchors pull straight up on the biner, and each supports 50% of the load.

In the second example, all three angles are 120 degrees. The situation is totally symmetrical, so all three forces are equal in strength. Each anchor strand has to be able to support 100% of the load. For example, if the climber is hanging from the rope (a static load), and weighs 100 pounds, then each anchor strand will also be subject to 100 pounds of stress. This is obviously not that great a situation, and each anchor is just as likely to fail as if you had simply hung the climber off of that anchor alone. However, the anchor is redundant, so this is still better than a single anchor.

The third example shows a hypothetical situation where the angle at the top opens up to 180 degrees. This isn't actually physically possible. Each anchor strand is only applying a horizontal force to the biner. There is no upward force on the biner that could cancel the downward force from the climber's strand. No matter how tight you were to pull the two anchor strands, they would never flatten out to 180 degrees. As the angle gets closer and closer to 180 degrees, the strain approaches infinity, and you're guaranteed that something in the system will fail. Maybe the rope will snap, or maybe the biner will break, or maybe one of the anchors will pull out.

There is nothing magic about 60 degrees. As the angle increases, the stress on each anchor increases. An angle of 50 degrees could be too much, if your anchors were poor and you needed to hold a big dynamic load. An angle of 90 degrees could be perfectly OK, if the anchors were good and they just needed to hold a small static load. There could be a situation where I just had no choice but to do an arrangement like the 120-degree example, because it just wasn't physically possible to set up with a smaller angle. (Maybe something's in the way, or there's not enough rope, or the smaller angle would require the biner to be so low that I couldn't safely reach it, or the smaller angle would send anchor strands over a sharp knife-edge of rock.) I would still prefer such a setup to a non-redundant anchor.

This is due to the load that is passed to each anchor. You might think that (for example) two anchors will receive 50% load each during a fall or simply when the climber weights the rope. But actually the amount of load an anchor receives depends on the angle of the rope that this is attached to.

Typically a belay with two anchor points forms a triangle

As the angle increases beyond 60 degrees:

So you should always keep the angle between anchors under 60 degrees.

15
How do I set a top rope anchor?
6
How much is a major load?
3
Climbing rope diversion, different scenarios

11
Anchor without cordelette?
11
Climbing Webbing with Taped Ends (where & why)
13
Why all the different accessory cord diameters?
14
Is a single strand of webbing unacceptable for climbing anchors?
12
Why static rope rather than webbing for toprope anchors?
8
How can I transfer my weight to a toprope anchor at the bolts?
9
Lowering other members of a party on belay after rappelling
5
How to use a static rope as a tether at the anchor of a top rope climb?
3
Use of a personal anchor system to rappel (abseil) off a cliff with anchors by the edge and at foot level
3
Climbing rope diversion, different scenarios