I'm just buying my Garmin and I'm looking for maps for geocaching. I'd like to select Bavaria, or a part of it. Under the link: User: Computerteddy (Wiki).

I've found the map for the whole Germany, over 1GB, too big and surely I don't need so much now. But I've found information about programs, that can be used to divide that maps: OSM Welt-Landkarte in MapSource.

I've tried first with the GMapTool, but I've been stuck with the list of files, and no clue what is in them and which region do they represent: 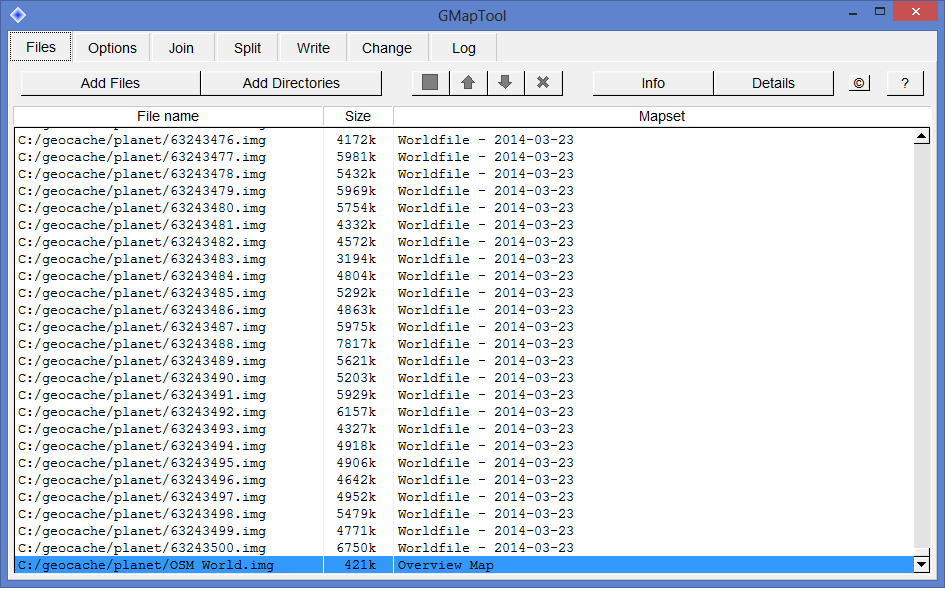 I've tried also MapsetToolkit, described in details in linked site, but the index file (teddy.typ) is not available, and I've failed to process the source .img files (the program crashed each time I've tried to do that).

Are there any Open Maps with smaller granularity, for example only Bavaria, Germany, only Masovia, Poland? Or some tools that can cut the map region based on coordinates, and don't crash doing that?

The easiest option is to use this website: Garmin.Openstreetmap.nl

It has an option to select just the map tiles you want, so you can get a map for a fairly small area if you want. To do this, choose the option for "Enable manual tile selection", then click on the tiles to select them. Then enter your email address, and click the button for "Build my map". You will soon get an email to download the map.

For loading onto a Garmin device, you need to download the file osm_generic_gmapsupp.zip, then unzip it. Dpends on what device you are using, but for most modern Garmins you can just copy the IMG file onto the device or a memory card, in a folder named Garmin.

Another solution if you have a computer running Windows or Mac is to use Garmin BaseCamp™. It's free. I'll describe the full procedure for windows, for Mac there should not be too much difference.

Note that BaseCamp menus/buttons descriptions are translated from the french version of BaseCamp, the actual menus/buttons naming in English version might differ a bit.

Not the answer you're looking for? Browse other questions tagged geocaching maps gps or ask your own question.

8
Are the orienteering marches popular in Germany?
6
How long is the battery life of a GPS tracker, when used to detect motion only?
5
What does the Garmin GPSMAP 66 "SOS beacon" function do?
3
Is it possible to delete Geocaches from a Garmin etrex without plugging it into the computer?
7
Is the Battery Life of the Garmin InReach Mini enough for a 2 week trip?
4
How can I find a GPS unit that can display north at the top at all times?
4
How to interpret forest from the map?
3
Do Garmin satellite map devices allow me to feed them coordinates from a CSV or JSON file or similar?
4
Is this a valid method from taking a bearing from a map?