How frequent are polar bears inland in the Mealy Mountains and English Mountains in Labrador?

I am considering a trek in August/September in the Mealy Mountains and English Mountains in Labrador (Canada's newest National Park; for info see 1, 2, 3). However, I am worried by the prospect of polar bears, so I wonder how frequent they are.

I have two data points:

Where do the Mealy Mountains fit in during the ice-free season (August/September)? Are polar bears occasional visitors like in Gros Morne National Park, where it's arguably safe to hike without worrying about polar bears? Or are they closer to being permanently present, and is hiking alone without a guide very dangerous?

The Parks Canada website has this to say about the region:

So the answer appears to be; there are polar bears near the coast on occasion, but not inland.

The area is not yet an established National Park, it's a land reserve that the Government is still in the works of committing into a Park. The 2014-15 Report on Plans and Priorities indicates that they expect to achieve establishing Mealy Mountains as a National Park by March 2015 so they can roll it out as part of Canada's sesquicentennial (150yr anniversary). After it is established, then the recommended place for getting detailed information about bear activity would be on the Important Bulletins board on the National Parks website. (see this Polar Bear Warning for Prince of Wales Fort National Historic Site as an example.) 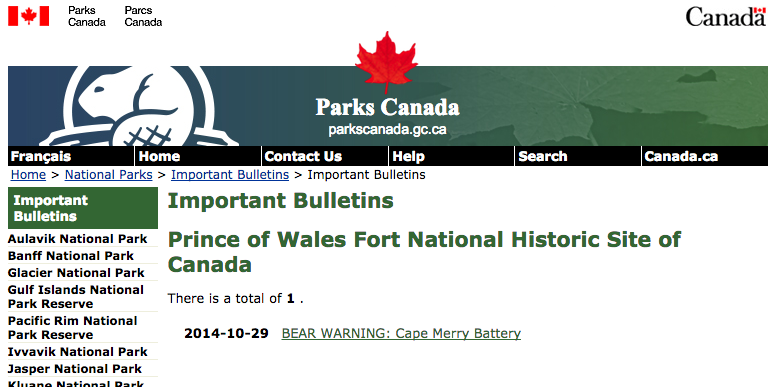 Hopefully the park has enough of an infrastructure to post bulletins by the time you go on your trip, if not, then it would be advisable to carry effective, approved polar bear deterrents and know how to use them.

Not the answer you're looking for? Browse other questions tagged safety bears polar-bears or ask your own question.

23
Are bears attracted by Lotions and Perfumes?
10
What are the proper precautions/protocols for storing food while car camping in an area with bears?
6
How safe is it with Grizzly bears when hiking in the Rockies near Calgary, Alberta?
15
What are the most frequent crimes perpetrated by people against people in the Great Outdoors?
10
How can the attitude that one is a guest in black bear country prevent hassles with bears?
8
How do you calculate the turnaround and start times when summitting mountains?
1
Is there any evidence that black bears (or other large predators) are indifferent to, or acutally repulsed by, the scent of humans?
9
How serious is bear safety in the sub-polar Ural / Komi Republic / Yugyd Va?
2
How frequent are encounters with bears/mountain lions/etc?