Is there any special effective technique (parkour or something similar) for crossing very high and dense mountain pine? Those ones can be really dense, and sometimes the only possibility to cross them is to walk on the top of them, and crossing it is usually very slow and tiring, especially with big backpack that likes to hook the branches. 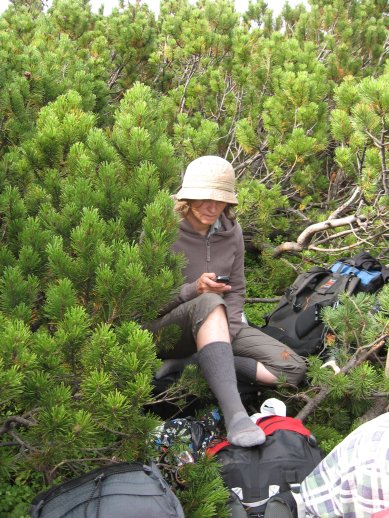 I've seen some running technique in a documentary with Bear Grylls, but I've forgotten the name, and I know you can't believe everything you see in his films...

There are ways to approach every mountain. The route that goes by ridges that are with sharper slopes / drops can take you to the top exceedingly faster since the forest on such a ridge is relatively thinner as compared to the milder ascends of it. At the same time such a forest can be bushy or more-or-less thorny all the way.

Whereas, if you take a milder ascend, you may travel geographically more than a sharper ridge as I said earlier. On the other hand, such a route will allow you to run through dense forests as you should expect.

I personally prefer sharper ridges when I am climbing up a mountain and a milder ridge to get down as I can simply run through on a descend (though it is not advised to run while descending).

Now, if you just traversing a mountain and not actually getting on the top of it, then you may not have much of a choice. OR may be even if you intend to go from one mountain to another, you should take the milder ridge to ascend as you just might have exerted your knees and ultimately lower body while descending. Alas, its more about who is good with what!

Not the answer you're looking for? Browse other questions tagged backpacking or ask your own question.

21
What are some proven methods of training for week long backpacking trips at high altitude?
10
What are the differences between high-end sleeping pads and cut to fit foam mats?
16
What makes nylon an effective material for hiking pants?
16
Dog Breeds for Backpacking and Trail Running
16
Tips and tricks for backpacking with a guitar
9
ultralight backpacking in snow and preparing for wet gear
5
Designing a sustainable and portable high-energy diet
8
Hiking map for Hokkaido and/or other resources
6
What is an efficient and effective way to test an emergency day-hike kit?