Ways of attaching a DSLR on a ACT Trail 32 backpack

I am looking into ways of attaching my Canon 7D anywhere onto my backpack (http://www.deuter.com/US/us/hiking/act-trail-32-34432-119.html) as it will not fit inside.

It will be mounted with a lens while i keep another one inside the backpack.

There are any number of ways to do this, but perhaps the simplest is to use something similar to this belt mounting clip and have one of your rucksack straps fed through the belt loops: 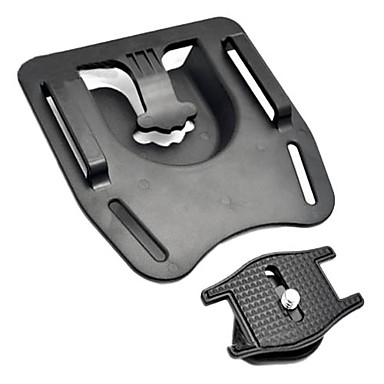 I would suggest mounting it either on the back of your pack, and allowing the camera to hang lens down, or on the top if you have a pack wide enough to avoid it hitting your head.

Look a the Peak Design Capture Camera Clip. It is designed to attach to the strap of a backpack or a belt. 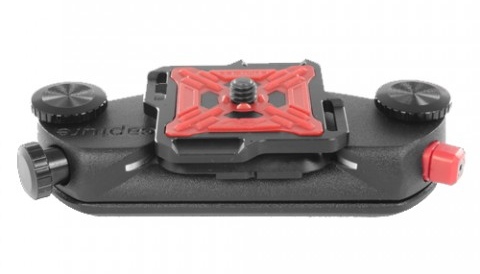 The clip screws on around your backpack strap, and a quick-release plate screws onto the tripod socket on your camera. Then that slides into the clip, and locks in place. So it should be easy to take the camera on or off while walking.

Personally I would not want to mount a camera on a backpack. Sooner or later you're going to slip or bump into something and the camera is going to get hurt.

Mounted on the backpack doesn't sound like it will be easily available. If you're not walking around ready to take a picture as the right situation arises, then put the camera in the pack. You say it won't fit in the pack, but that doesn't make sense. Cameras aren't that big. What you are really saying is that you have given other stuff priority in your pack, so the camera and the other stuff don't fit together. I see three obvious solutions: Put some of the stuff outside the pack instead of the camera, bring less stuff, or get a bigger pack.

If you are walking around and want to be ready to take a picture on short notice, then keep the camera around your neck and one shoulder. Just around the neck would allow even quicker access, but I find it doesn't work well for hiking. The camera bounces and swings aroun too much, and if you lean forwards it is easy to forget about the camera and have it bump into something. Around the neck and one shoulder works much better for hiking. Adjust the strap lengths so that the camera is against your side just above the waiste. That is comfortable, but it won't swing like a pendulum, will not dangle much when you bend over, and it somewhat protected by your arm on that side right behind it. It's pretty quick to grab and bring to shooting position, although not quite as quick as just around your neck.

I've found a few different ways to do this. Each with it's own pros and cons.

Personally I go between the CottonCarrier vest which offers the fastest access and the Toploader chest pouch if I'm worried about the weather. Your camera just clips into the CottonCarrier vest with a small mount that screws into the bottom. If you are doing lots of tripod work this may not be idea as your tripod won't be flush to the bottom of the camera. The pouch is the most weather proof as it comes with a small waterproof cover as well.

Not the answer you're looking for? Browse other questions tagged backpacks dslr or ask your own question.

14
Is a type of walking trailer a good alternative to a heavy backpack in off-road conditions?
16
How can I keep my backpack safe?
2
Add more external space to my ACT Trail 32
11
Is it possible to "pad" the shoulder straps of backpack?
11
Best knot (hitch) to backpack webbing
7
Can anyone identify this JanSport external frame backpack?
8
Carrying a bridge camera while hiking with a backpack
4
Hiding backpack waistband
2
What is the proper method for attaching the straps to this North Face frame pack?