Are there any phobia-friendly ways to deal with flies?

I admit that this is not intended exclusively for the great outdoors.

In truth I rarely venture into areas that are wild and overgrown with vegetation, tending to stick to more sub-urban excursions. And a large part of it comes down to having a moderate phobia of flies (a fear sufficient to endanger driving).

Often I find myself faced with my most common of nemeses (both outdoors and in the office (insect screens installed but the smaller ones still get in)).

I could try bug spray - but not only is it less effective against faster and/or smaller flies - its a very short term solution with an ever-replenishing supply of the pests. Not to mention the health impact of spray (I swear some bug sprays include ingredients causing feelings of paranoia - more notable when used indoors)

I could use DEET products - except that I have had allergic reactions to anything other than mild doses (so I mainly apply to hairs rather than the skin these days). that and their effect doesn't quite cut it for keeping them away.

To make things more complicated, I simultaneously cannot stomach use of swatters.

Considering how easy it is to repel mosquitoes, is there no way to keep the flies at bay?

Failing this, is there perhaps a health-friendly way to exterminate the buggers from a distance?

Common houseflies are attracted to decomposition of meat and sugar. People who find themselves the specific targets of flies often smell sweet to flies usually because they use some kind scented hygiene products. Diabetics in ketosis can also attract them in theory.

To my knowledge, flies do not drink directly. Many insects have trouble drinking water because at their scale, the surface tension of water can entrap them. In in dry areas, you seldom see insects drawn to fresh water. More often, you see them drawn to some liquid with lots of biomatter in it e.g. cow urine. It looks like they're drinking but they're really trying to eat. Plus, the biomatter lowers the dangerous surface tension.

Insect get their moisture from food and the air. If you find flies targeting your sweat specifically, then its likely they perceive it as sweet or containing ketones from the breakdown of proteins in the body. Switch to unscented hygiene products and avoid perfumes.

There are a lot of passive traps that use rotting fruit for bait and you can use those to reduce fly population in an area.

However, most effective area defense for a home and even a vehicle would be the type of fly bait sold to protect cow barns. You have to buy it from agricultural supply. You usually use it around, but not inside of house but because it has an attractive aroma for flies. That's unnoticeable in a barn but not the living room. It's harmless to mammals unless consumed in large quantities and it has no transfer risk. (It's designed to be used around valuable and/or food animals.) I found this highly effective when we had an outbreak of flies here a few years back.

DEET won't help against houseflies because it jams the CO2 receptors for insects like mosquitoes that hunt mammals. Houseflies do not have those receptors.

I would note that in a suburban area, you really shouldn't have large numbers of flies. The two most common breeding areas are unsealed trash cans and the feces of large dogs. Check with your neighbors to make sure their trash is sealed and dog feces are picked up. All this should be done anyway as basic sanitation.

There is a folk preventative in the Southern and Southwestern US that says that plastic bags of water, suspended in the air, seems to drive off flies. It plausible that the in the spectra that flies see in, weighted to the ultraviolet, the refractive qualities of the water and plastic combined might cause a dazzling effect which the flies will interpret as predator motion. It seems to work anecdotally but I don't think anyone has actually bothered to research it scientifically.

However, it might be the only means of fending off flies in a vehicle. The enclosed space precludes pesticides of any kind so some kind of passive defense is required. You could try mounting a plastic water filled bottle to the dash and see if that helps. Bottle must be plastic because class is opaque to UV, so the theoretical dazzling effect won't happen with glass. I would suggest putting some aluminum foil underneath the bottle to prevent an accidental lens effect from concentrating sunlight to a dangerous degree on the dash underneath.

Phobias are a very real and difficult problem to deal with. I wish you luck.

Because I appear to be a midge's favourite food, I have tried many ways to repel them, with varying success, but the single best solution for you, if you can cope with having flies near but not touching you, is the midge suit and hat. Examples below: 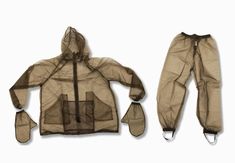 And this hat from Gillaroo.co.uk 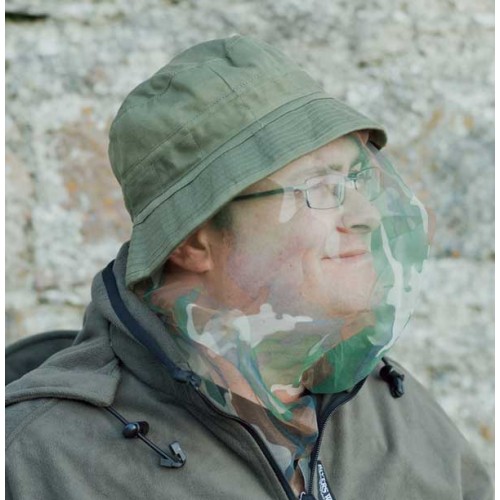 They stop flies, midges, mosquitos etc touching you. Of course, those bugs that are attracted to animals will still fly around you so this won't necessarily be a perfect solution, but it may help you live within your phobia and acclimatise yourself.

Put out a small glass/bowl of apple cider vinegar and hang one of the sticky Victor fly ribbons over it. You will have a steady collection of the invaders to dispose of.

You could make a car safe version if you cut flaps near the top of an empty water bottle and put a fly ribbon inside. You could put a small sponge in the bottom with the apple cider vinegar but you would need to occasionally add more to refresh it.

I recommend to go first to a therapist, particularly one specializing in anxiety disorders, preferably one that is familiar with and uses exposure therapy. I know you've already mentioned you are not a fan of "immersion techniques", but professional therapists have a bit more refined skill than what you've probably experienced so far, plus, they can diagnose other treatments that may work better.

You've already acknowledged you understand your irrational fears, and with some help you may be able to overcome them, and can then deal with the flies no differently than anyone else.

Not the answer you're looking for? Browse other questions tagged bugs or ask your own question.