My friend and I often boulder around my home instead of driving to the local area, and when attempting some more challenging features, such as overhangs and slightly taller cliffs, we would feel better using a top rope, as we could try dynos with less risk.

I would hate to use a rope that has not experienced any or few lead falls, as it is still a rope I would prefer to save for actual leads. I have an old rope that should not be used for real climbs any more, but I believe could still be used as a top rope for bouldering.

TL;DR: What are the safety concerns associated with using an "old" rope as a top rope for short boulders?

With due respect to Ben Crowell, who is I believe a far more experienced outdoorsman than I am, I beg to differ with his answer. (Edit: his answer prior to revision.)

Having worked at a very small climbing wall I have seen tough ropes completely worn out by top-rope climbing alone, therefore at least in the extreme "Ropes don't become weak from top-roping or from sustaining lead falls with a small fall factor" is incorrect. I'll come back to that but first let me mention aspects of wear to a rope.

As described by an industry professional in an excerpt I quoted in Ideal and Minimal Rope Diameter for Lead Climbing there are at least to major kinds of wear to a climbing rope: abrasive wear to the sheath, and dynamic wear to the core. Because the parallel core (kern) of a dynamic climbing rope is very vulnerable without the sheath the rope is useless if the sheath is worn out. Likewise the sheath, while typically quite strong in its own right when new, is not capable of absorbing impact therefore a rope with a degraded core is unacceptable for lead climbing. (And since it is hard to degrade the core without at least some degradation of the sheath as well it is probably unacceptable for any human load.)

I think it is an entirely valid concern to not want to wear out a new lead rope while top-roping. In fact top-roping can be pretty abusive to a rope: when you are lowering someone, which I assume would be part of your use, the rope is loaded as it runs across any surfaces it contacts and through the anchor point hardware (carabiners). Getting back to the climbing wall experience I have seen both things wear out extra-tough gym rated ropes: abrasive wear from running over inconveniently placed holds (which are not nearly as rough as many types of rock) and severe flattening from repeated short falls on the same section of rope. (At a roof.) Of note, the gym uses steel quick-links or eye bolts for top anchors rather than the large radius anchors used in some other gyms, so the stress is greater and similar to standard hardware used outdoors.

Getting back to the actual question, top-roping does produce much lower instantaneous stress than a lead fall, assuming an attentive belayer, therefore you have a larger safety margin. I would nevertheless not contravene any of the guidelines described by Beal Ropes, which I quoted in When should I retire my rope. If the rope is actually worn out it needs to be retired. However it is common practice to move old lead ropes to top-rope duty to finish them off.

There is another option you should consider if you plan to do a lot of top-roping, especially if you climb abrasive rock or sometimes cannot extend the anchor far enough. You do not need a dynamic climbing rope for top-rope, and dynamic ropes typically wear much faster than static ones therefore you should consider picking out a dedicated rope for this purpose. The exact definition of a "static" (or interchangeably "low elongation") rope varies and is more of a catch-all term for non-dynamic ropes. I recommend that you avoid any very-low-elongation lines such as polyester canyoneering ropes, Sterling HTP Static, etc., and instead pick one that is certified as an EN 1891 safety line which requires that it have some impact absorption. 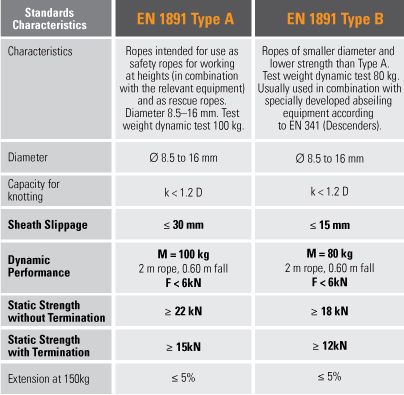 Note that either type A or B requires handling of a factor 0.3 fall with a limit of 6kN peak force (quite survivable). This is a larger fall than anyone would expect with a slingshot belay (top-rope, bottom belay) unless the belayer falls asleep. With a top-belay one could get higher fall factors right near the top if there is significant slack in the system, so don't allow that.

This question has some information about when to retire a rope. The core of a rope doesn't become weak from top-roping or from sustaining lead falls with a small fall factor. It becomes weak from sustaining multiple lead falls with very large fall factors, approaching 2. The only way to get a fall factor greater than 1 is if you fall past your belay station (e.g., in multipitch climbing with a hanging belay); if you've never fallen past your belay station, then you have probably never strained your rope to the point where the core was weakened by any non-negligible amount.

I would hate to use a rope that has not experienced any or few lead falls, as it is still a rope I would prefer to save for actual leads.

This isn't a correct way to approach the problem. Letting a rope catch some top-rope falls will have zero effect on the rope's safety or usable lifetime. If you've got a new rope anyway, there is no good reason not to use it.

To put this all in perspective, a modern climbing rope is ridiculously strong. It's essentially impossible to break one in normal climbing use. When people put a climbing rope on a test machine and stretch it to the breaking point, a brand-new rope typically stretches to about ten times its normal length before breaking. Try to imagine what that would look like: the rope would look like taffy being stretched so much that its diameter was about 3 mm. The UIAA has a "standard fall," which is a fall factor of about 1.7 with an 80 kg weight. This is a fall so violent that if you took one in a trad-climbing environment, you'd probably rip out or destroy your gear, your belayer might not be able to keep the brake strand from slipping, and you also might get vertebrae broken by the force of your climbing harness stopping your body. A rope has to be able to hold multiple falls of this type in testing.

People have in fact tried to test empirically whether ropes get weaker under normal use -- as opposed to abuse such as very violent falls. See Smith 1988. With static ropes that had been abused, they were able to detect some weakening with use. But we're talking about dynamic ropes that haven't been abused. With dynamic ropes, they were generally not able to get the rope to break when they put it on their test equipment. The general idea is that materials have an elastic limit, and when you subject them to a strain that's less than the elastic limit, they return to their original size and shape when the strain is removed, and there is no damage. Smith's general conclusion is that "Care and storage is the strongest factor that influences rope strength, far more than age." This seems to agree with Johnson and Klonowski's finding that dirt and sand can significantly reduce the strength of a rope.

A more realistic worry with an older climbing rope is that it can get damaged by rock fall or by rubbing against a sharp edge.

Also, as pointed out in Mr. Wizard's answer, you should retire the rope if the sheath is wearing out. If the sheath isn't in good shape, the core becomes very vulnerable to damage.

So in summary, here are some things that significantly weaken a rope. If one of these happens, you want to retire the rope. Repeated top-rope falls are not on the list because they're not a serious concern.

Not the answer you're looking for? Browse other questions tagged safety rock-climbing ropes bouldering top-roping or ask your own question.

25
Ideal and Minimal Rope Diameter for Lead Climbing
23
When should I retire my rope
6
Can nylon ropes fail from bend fatigue?

12
When rock climbing, what is the difference between top-roping and leading?
24
How to inspect climbing bolts?
16
Placing protection efficiently when leading trad?
15
Climbing: fear/panic on boulder wall
12
Paracord rope strength
5
How to improvise a rescue 'throw bag' rope?
5
How to use a static rope as a tether at the anchor of a top rope climb?
10
What counts as on- or off-route while outdoor climbing?