How to use campus boards 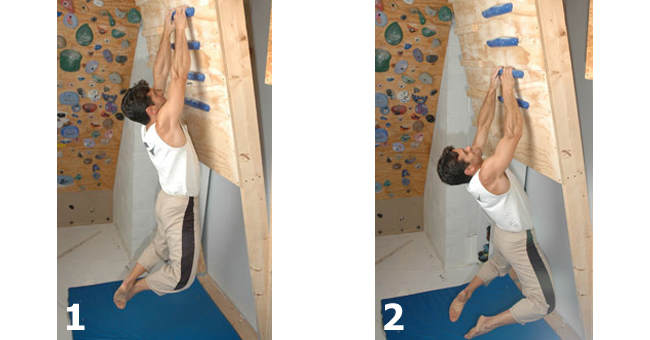 How do you use these to train effectively? What's the technique process for using them, etc?

What area's of your climbing are they aimed at improving?

Moving up a 1 cm wide campus board one hand at a time is on par with the intensity of V4/V5 boulder moves, approximately. So unless you're very comfortable bouldering in this range, it's not suggested because you will probably injure yourself. If you are past this phase, then campusing is a very good training tool for increasing strength and power in a very focused manner, compared to just climbing random routes at a gym. I don't agree with the previous answer that it's just for people who climb better than 7c (5.12d/V9-ish)--you can definitely incorporate it into your workout long before then with moderation.

Unlike climbing routes at a gym, which have lots of different styles, campusing allows you to very quantitatively monitor your progress. One week you can only hang on a rung for 2 seconds; next week you're up to 5 seconds--that is well-defined progress. It's also more efficient compared to climbing in some respects because of its high intensity.

Here are some training exercises that the campus board is good for (Note: all should be done with an open-hand grip):

I guess to understand the use of a campus board it's the easiest to have a look at it's genesis:

The campus board was invented by Wolfgang Güllich, who was with Action Directe the first to climb the grade 9a. He invented the campus board while training for this ascent. The crux of Action Directe is a dyno into a shallow hole that has to be held with the first phalanx of a single finger. Also the rest of the route contains many dynamic moves into small holes which require a high degree of finger strength in combination with precise coordination. One of the typical use cases of a campus board is to train exactly those two things.

Methods of campus board training typically include either dynamic or quasi-static moves upwards or downwards, either one-handed or with both hands simultaneously. Also one can do moves just from one latch level to the next higher or lower or skip one or several levels to increase difficulty.

But there's also a big warning: it's not a beginner tool! As all the exercises are done hanging freely with the feet in air, it requires a very well trained upper body. With its small latches that normally only take at best the first two phalanges campus board training puts significant strain on the finger tendons and joints which can easily cause injuries. One should only use it after a very good warm-up and only if one is able to hold the latches open-handed and not crimped, as in the picture below, as the crimped version puts even more stress on the finger joints.

Therefore I would say that a campus board is a training device for high-end use and training of very specific muscles and moves, typically for people that climb in the range of about UIAA IX/French 7c or better. For inexperienced climbers or such that do not have enough strength to use it correctly, it might easily do more harm than good.

10
When should you start to train with Campus Boards, Hang Boards and Peg Boards?
5
Effective training for rock climbing

15
How do I mount a hangboard in an apartment?
9
How would you evaluate sailing lessons for adults?
25
Keeping the things interesting in a small climbing gym
5
Effective training for rock climbing
37
How to overcome the fear of falling in lead climbing
10
When should you start to train with Campus Boards, Hang Boards and Peg Boards?
16
How can I build a board to mount climbing holds in my house?
18
How to train climbing endurance at home?
9
What's the easiest way of improving my strength without a large investment of time?
0
Munter hitch + prusik for rope solo lead climbing