How do you make a snow shelter?

Sometimes when mountaineering, there may be an emergency situation which leaves you in bad weather with no or damaged shelter (such as returning from a summit attempt or after a wild and crazy storm).

Snow shelters can keep you insulated as well as protect you from wind. How would you go about building one?

Here are few shelters that I think have good design. Although some of them are missing hole for cold air to drop in, they are still good for shelter from a storm as quick solution. 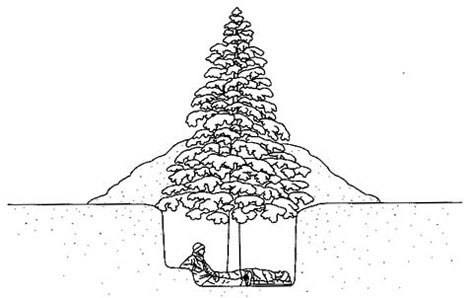 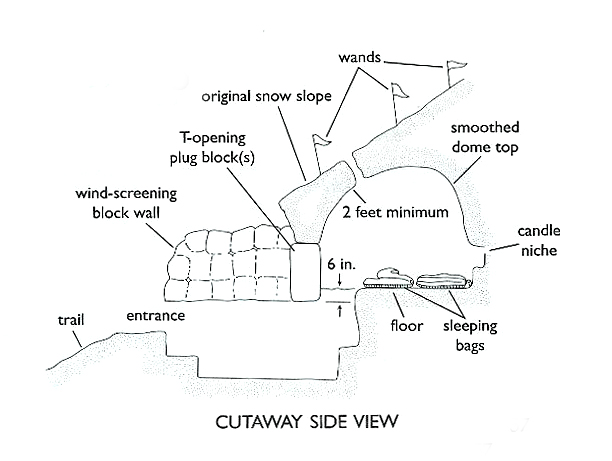 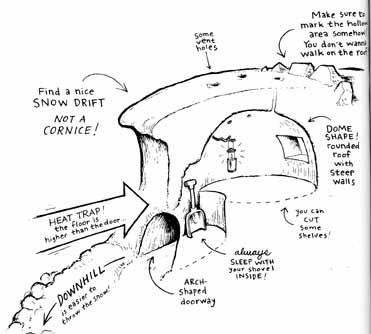 Think of the time you can invest and rather you'd want to invest into making one of these, as it takes quite an effort and time to make one that you'll be wanting to be inside of.
If you are in a hurry, consider making a trench instead of a snow cave. As a trench can be made far more quicker and takes less efforts, and can be relied upon in case of emergency (not the avalanche of course) with proper use of bedding sheet or a tarp underneath and over to keep you warm. Obviously you can't expect that to be as warm and comfortable as a cave.

A snow cave, needless to say not to be confused with an Igloo, is a make-shift thing: Spend a night and get going kind of a shelter.
The idea of a snow cave is digging snow in a manner that the entrance of a tunnel/cave is slightly lower and the main space is a bit higher in order to retain warm air.

Not the answer you're looking for? Browse other questions tagged safety survival mountaineering emergencies shelter or ask your own question.

12
Best approach to camping in snow?

6
What is the best material to make an outdoor shelter roof out of?
17
Can I heat a shelter with fire?
24
Reacting to tornado warnings while camping with no buildings nearby
11
Setting up a shelter
6
Unfreezing cached water bottles
37
Mountaineering with a 6-year-old kid in winter
8
How do you make a stone axe?
9
Quick and easy winter shelter for kids to build
10
How much difference does wind chill make if you are inside a snow cave?
4
What first aid steps should you take for someone who faints after being injured in the cold rain?