What is the best rope to have in a survival situation? [closed]

Ask Question
Asked 11 years ago
Modified 5 years, 9 months ago
Viewed 8k times
11
Want to improve this post? Provide detailed answers to this question, including citations and an explanation of why your answer is correct. Answers without enough detail may be edited or deleted.
Closed. This question needs to be more focused. It is not currently accepting answers.

Want to improve this question? Update the question so it focuses on one problem only by editing this post.

What rope would be most helpful/versatile in a survival situation?

Parachute cord (also paracord or 550 cord) is a lightweight nylon kernmantle rope originally used in the suspension lines of US parachutes during World War II. Once in the field, paratroopers found this cord useful for many other tasks. It is now used as a general purpose utility cord by both military personnel and civilians. This versatile cord was even used by astronauts during STS-82, the second Space Shuttle mission to repair the Hubble Space Telescope. 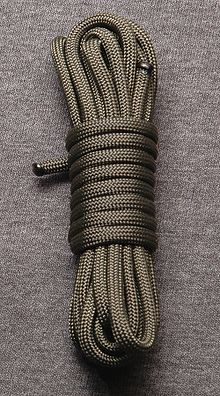 I'd argue that it's more than just a survival rope -- it's useful in many regular camp tasks like hanging a bear bag or putting up a clothes line.

Unfortunately, the term "parachute cord" has been slapped on cheaper knock-offs that aren't up to the military's original specifications, so it's not as strong. If you're going to purchase some, make sure you select a type that's strong enough for your intended uses.

As Hartley Brody suggests, I would carry a few metres of para-cord, as this is a very tough and versatile rope which can be used for a lot of things in survival situations.

However, if you are heading up onto a hill, I would also carry a 30m or 60m length of abseiling or climbing rope (and a belay device), just in case you ever need to make an emergency descent.

I may be biased as a mariner, but I am partial to three stranded twisted rope. It may not be as strong as braided-cored ropes per thickness, but I can do more with it.

With three stranded twisted rope, I can indefinately join pieces together permanently without any special tools. So I can make a continuous and very long rope if necessary that can still run through makeshift pulleys, sheaves and and blocks.

I can if necessary divide the rope up into its individual yarns if I need something smaller, and I can retwist them back together if necessary (admittedly a pain in the arse, but still doable).

I can put a permanent eye at the end of the rope without using a bowline or needing special tools to do so, for in those cases when a knot isn't right for the job.

If my rope starts to fray, I can cut it and rejoin it permanently without special tools.

Some specially knots, such as those to make animal traps from bent over trees take advantage of the knuckles caused by being twisted stands of rope, creating a knot that pulls free, but resists it until the knuckle gets pulled through.

I agree that good quality para cord (look for 550 cord from a reputable supplier) is the best general purpose solution.

It is strong enough that you could just about abseil off it with nothing else than a couple of carabiners in an absolute life or death situation or use it as a safety line for crossing a river or lowering your pack over a steep incline or canyon wall etc.

It also has a multitude of other uses from bootlaces to cordage for shelter building and you can separate the inner threads to use as fishing line or sewing thread for repairs.

You can also twist or braid it together to make a stronger rope or straps for an improvised pack.

It is light enough that you can stuff a few hundred feet of it into a pocket and forget about it.

For survival use it is probably best to go for high visibility orange, yellow or red that way if you are waiting for rescue in dense terrain you can string it across trails or open spaces to guide rescuers to your location.

It should go without saying that if you are doing any sort of climbing, abseiling etc in anything other than a dire emergency you really do need to right tools and knowledge for the situation in hand.

It is also worth adding that a knowledge of the fundamental principals of cordage, ropes and knots is one of the most basis survival skills.

I think first you need to know what you want to do with it. I'd put rope into three main categories based on thickness: disposable rope, like thin sisal, medium general purpose rope with a breaking strength of a few hundred kg, and climbing rope, which is generally rated for breaking at 2000 kg, or 20 kN. The heavier ropes can do anything the lighter categories can do, but they're much bulkier and heavier to lug around.

So, if you're only going to be tying shelters together, tie a tarp up, maybe a washing line, stuff where you don't need strength or grip, grap a few dozen meters of sisal or cheap cord.

If you mostly plan on making rafts, lowering gear down a cliff or getting it across a stream dry, using rope in emergency first aid (pressure bandage, splint, tourniquet if absolutely necessary), tug small boats, tie lots of stuff down on a car/bicycle/donkey or even carry people on your back in an improvised backpack fashion the medium rope is the best choice. Paracord is a good option, as is prusik rope or, quite possibly my personal favorite, some flat webbing, about 15 mm, coarse weave.

But while those ropes are strong enough to hold a person, they will not catch a falling one. The medium rope will break on you while climbing. In a real emergency, with a light climber, keeping the line tight, maybe using several ropes braided together, maybe. But if you plan on climbing, bring the real stuff. Same for if you want to be able to tow vehicles (an actual tow cable or a winch setup is still better of course, but this will generally work if you're careful) or do any other real heavy lifting. 1 inch tubular webbing, either climb spec of mil spec, is awesome stuff for a lot of applications. Its limitation is that it will only reliably catch a grown person falling up to about 2 meters. Above that you need dynamic rope. When you're climbing up a cliff putting in your own anchor points, dynamic climbing rope. But for something like abseiling or top-roping static ropes are fine.

A major downside is that for many of the applications that require real strong rope, you need a lot of it. Especially for climbing a few dozen meters of rope is not too much of a luxury. Most of the medium strength stuff can be done with a few meters of rope, and the lightest knotting you can do with any rope often requires no more than scraps. At the same time, 50 meters of thin sisal easily fits in your pocket, being the size of maybe 4 meters of medium strength rope or just 1 of the heavy stuff. So if you're not going to use a "tier" or functions, for instance because you don't know how or you don't see how it would be useful in your situation, don't pack for it.