How to safely mark a rope

I was reading this question and the first thing that popped into my head is what do you use to mark the middle of the rope?

I was taught not to use any kind of marker on the rope (because there's no sure way to know it wont be abrasive). Are there safe ways to mark a rope?

You can buy specialist markers. 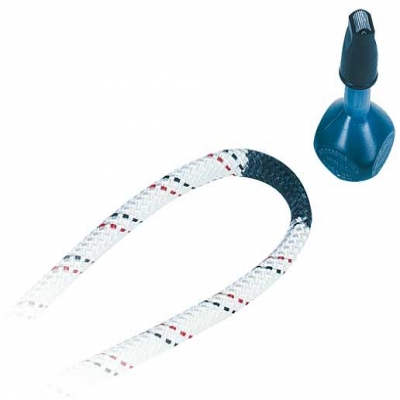 They're designed to not impact the rope strength. Always use a specially designed rope marker as there is a comprehensive list of things to keep away from your rope and marker pen is one of them. The solvents can break down the nylon rope fibres making your rope potentially unsafe.

No matter what, try not to use the spray-paints at all. Considering that fact that most of the spraypaint and allied products contain solvents/chemicals like CCl4, Acetone, Methyl ethyl ketone, Ethylbenzene, Butoxyethanol and Xylene, etc. If I were you, I would not use it on my ropes for that matter.

I used fishermans thread, the sort used to bind the guide loops to the rod, as a whipping around the approriate point.

The German Alpine Club (DAV) tested several permanent marker pen inks (Edding 3000, Retract 11 and Staedtler Lumocolor) and found no reduction in rope strength in static tests. So I would feel pretty safe in using one of them, despite the fact that they are not specifically sold as "rope markers".

It makes sense to mark the middle of the ropes. Many rappelling and lowering accidents might habe been prevented by this. Marking the middle with tape makes little sense as the tape is not very durable and might slip. Additionaly, it might get stuck on the prussik when rappelling.

Using the inks Edding 3000, Retract 11 and Staedtler Lumocolor, no relevant reduction in strength could be found in static testing. They can be regarded as adequate to mark the middle of ropes.

Another longer Explanation for those who speak german.

The Edding company even promised the DAV that the name of the pen would change if the composition changed, so that the 3000 pen should be safe for the forseeable future.

Marking pens are fine to use on ropes as long as they are water based laundry markers. Years ago solvent based markers were the norm. Some of the solvents used in these old pens could reduce the strength of the sheath strands marked. These days most pens are water based so this is not as much of an issue as in years passed. We recommend a Sharpie “rub a dub” laundry marking pen.

Tests done by the UIAA Safety Commission and some rope manufacturers have shown that marking ropes with liquids such as those provided by felt-tipped pens can damage them; even with those markers, sold specifically for marking ropes. The test results have shown a decrease of up to 50% of the rope strength, more correctly: of the energy absorption capacity of the rope (expressed by the number of falls in the standard test method in accordance with the UIAA Standard101).

Therefore the UIAA Safety Commission warns against marking a rope with any substance that has not been specifically approved by the rope manufacturer of that rope.

Black Diamond thinks it's not likely to cause any harm, though they didn't make ropes at the time:

so I had my crack crew of engineers grab a few cords, mark them up with a Sharpie, and pull them in the tensile tester. As expected, the ropes always broke at the knot—the Sharpie's middle mark seemingly having no effect on the strength of the cord during this test.

I don't think Sharpies or any other permanent markers have really been proven to actually damage nylon—short-term or long-term. However, I can't recommend them for use on rope either because the manufacturers will not and cannot guarantee that the marker will always be free of possibly harmful chemical ingredients. In other words, they can change the formula on a whim and none of us would be the wiser.

I use a figure-eight loop. Fairly easy to remove when you need to. Also gives the possibility to descend on one or two ends of the rope if the middle is brought to your anchor.

Edit1: Of course not to permanently damage your core, it is advised to regularly (eg after each trip) take out the knot. This way the core gets a chance to recover.

Edit2: I strongly advise against marking the middle of your rope with a permanent marker. This for the simple reason that when you have to cut your rope, the "middle"-marking will still be there. When you have multiple middle-markings it will be hard to know which one really marks the middle when you need it.

Markers are never a good way to 'mark' your rope. Buy a rope that's already marked with another color. It's in any case better to do it old fashioned and find it using some rope techniques.

We use electrical tape on all our equipment. But I cannot guarantee its safety.

40
Things to keep away from climbing ropes
15
Do sharpies or markers damage soft rock climbing gear?
16
Safe way to mark a carabiner gate?
6
Do Half/Twin/Double Ropes get Middle Marked?

14
What to teach someone who wants to start lead climbing?
16
Should a carabiner ever be clipped to the tie-in loops and should anything other than a carabiner ever attach to the belay loop?
4
What fall factor will cause me to hit the deck with a typical dynamic rope?
19
Best rope for a rope swing
12
Paracord rope strength
2
What's the fastest way for a single person to setup a tarp umbrella/leantoo in the rain in a nothern temperate forest?
5
What type of rope should I use to make a 1.5" Gym Climbing rope?
1
Have a couple basic Q's on climbing-line (1 on safely descending/rappelling, another on using multiple lines and/or hardware to achieve "1+1=2"?)
3
What knot was used by my mountain guide to tie me in to the middle of a rope?
5
How do I know the local ettiquete on lowering vs. rappeling?