How much is a major load?

So the UIAA sets a major fall (fall after which to retire your gear) to be a fall factor of 1.77.

Now I was wondering what would count as a major load (load after which to retire your gear) ? 50 kN ? More? Less ?

In the petzl document "tips for protecting your equipment" they don't seem to make a distinction between metal gear and ropes. So is that the same for all ?

Your equipment should all come with a Kn rating. this is the force that that piece of gear will hold (often in what direction).

So looking at a standard carabiner: 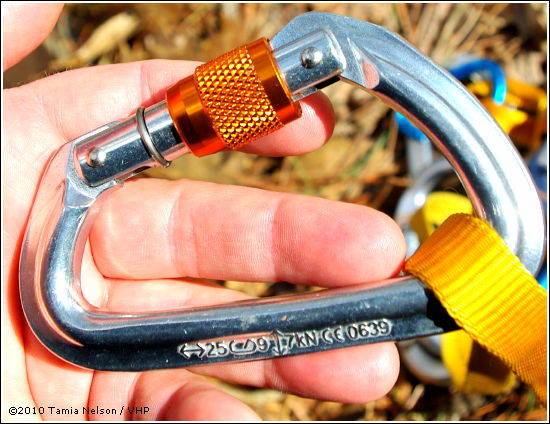 All pieces of gear should come with these ratings written on them somewhere or in the documentation included (this includes ropes). Different pieces of gear will hold different kns and they all vary slightly so you need to check the rating of that particular gear.

For another example here are some brass nuts. You can see the ratings below:

One other thing to bear in mind is the strength of the rock. There is no use putting a 20Kn cam into soft brittle rock. The cam may hold the fall but if the rock gives way it doesn't matter.

In a fall, roughly the same load is applied at every point along the rope, at the climber's harness, and at the anchor. "Roughly" means that this is an approximation where rope drag is negligible, the mass of the rope is negligible, and we're not taking into account the geometry of a redundant anchor. (If the anchor is equalized, the load could be shared by the different pieces, but if the angles aren't favorable, the load could be increased.)

Physically, the maximum load is probably the most relevant thing that determines what bad things will happen to the rope, climber, and gear. (It's also possible that total energy dissipation could make a difference.) But since maximum load is essentially determined by fall factor, all you really have to worry about is a single number, which is the fall factor. This is good, because fall factors are easy to estimate while climbing, but it's not practical to estimate while you're climbing how big the dynamic load will be from a lead fall.

12
Why should the angle in a rope attached to two anchors be 60 degrees or less?
10
Climbing gear: can the energy absorbers of a lanyard for via ferratas be used only once?
6
Major fall, same for static and dynamic?

17
How much gear will the AT eat?
14
How big a fall is a "major" fall?
6
Major fall, same for static and dynamic?
8
How to achieve a climbing anchor that can withstand an upward load?
4
Why do some climbing ropes have smaller load bearing than some paracords?
3
How to store a knife
3
Can I make a safe climbing-anchor with a 2-ton working-load sling that was meant for lifting vehicles?
10
How to prevent strap slippage through buckle?
2
How can I increase friction in a zip?