How should I choose between setting up a Cordelette or an Equalette climbing anchor?

I was going through anchoring techniques and I came across this well-received question:
Anchor without cordelette?

How should one decide when to go for a Cordelette or an Equalette?

I've had to deal with this question a lot teaching anchor building. When people have asked in the past I normally suggest they use the anchor you are most comfortable setting up, as they will both definitely work.

That said, if we want to dive deeper into the rabbit hole, it's important to identify some distinct differences between them.

Equalette: Typical top-rope setup on bolts or gear using a sewn-sling or cord. Characterized by carabiners on separate strands, most often with limiting knots to each side.

Cordelette: Mostly now seen where an Equalette isn't. Characterized by a huge knot joining all connection points together. 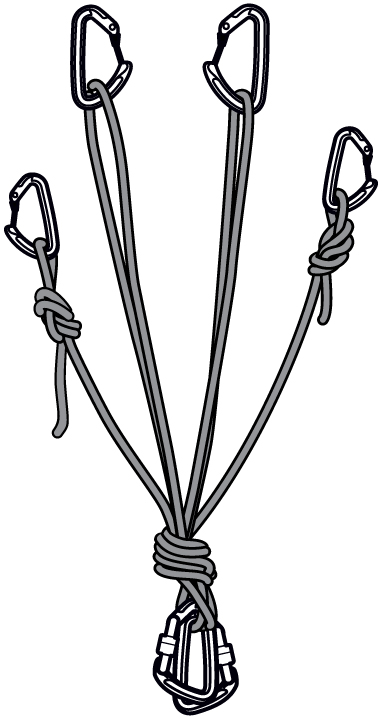 While discussions about anchors, (especially theoretical holding power), may rage on for generations to come, you can probably make some good rules of thumb by thinking about the most significant differences.

For single-pitch climbing: use an Equalette setup whenever the route traverses significantly, and use a Cordellete when the route follows a direct line up.

Additional reading: Lots of anchors variations exist - the Triplet, ACR, and Sliding X to name a few. They are all useful to know also. In a multi-pitch context, having a master point involving two carabiners is a major pain so the Equalette would be off the table for me. The more anchors you can tie, the more you can plug in what makes the most sense.

Update: See what is an equalette anchor for additional pictures and discussion.

Both cordelettes and equalettes are made from loops of durable material; either a very large sewn sling or a loop of accessory cord (6 meters of 7 mm accessory cord is a common length).

The issue with cordelettes that led to the idea of the equalette is that a standard cordelette does not equalize loads all that well. Most of the load will be applied to the shortest arm, and a chance in the direction of pull results in significantly different forces being applied to each arm. Good equalization with a cordelette is only achieved when each arm is the same length and the direction of pull remains constant.

So, if all your anchor pieces are roughly level with each other, and the direction of pull will remain straight up and down, your cordelette should still work OK. The equalette tries to address the problem of off-axis loading (i.e. the direction of pull not remaining constant) and unequal length arms. Note that both the equalette and the cordelette may be made with any number of arms; it's common to use 3-4 pieces of gear when a pair of solid bolts is not available.

11
Anchor without cordelette?
14
Is a single strand of webbing unacceptable for climbing anchors?
12
What is an equalette anchor?
3
Best way to secure hook to rock for slack lining?

11
Anchor without cordelette?
11
Climbing Webbing with Taped Ends (where & why)
12
What is an equalette anchor?
11
Learning Anchors - How is single cordelette loop anchor redundant?
6
How long of cord do I need to make a three-point cordelette?
8
How can I transfer my weight to a toprope anchor at the bolts?
7
Which option should you use for a multi-pitch climbing anchor after traverse?
9
Lowering other members of a party on belay after rappelling
5
How to use a static rope as a tether at the anchor of a top rope climb?
3
Use of a personal anchor system to rappel (abseil) off a cliff with anchors by the edge and at foot level