How to detect a crevasse on a glacier

When you're walking in a roped party over a glacier, how can the leader detect crevasses?

What are good ways to find a save path on a glacier? Some mountain guides use wood sticks with an iron tip to try to detect crevasses. How deep do I have to stick with my ice-tool?

If the glacier isn't snowless (aper) you can probe for spaces under the surface which should be noticed by less resistance in the snow/Firn. Still it is preferable to avoid going in regions where one would expect crevasses. This isn't easy like it is tough to know how the weather is going to evolve in the mountains. But still we could try to use some theory to spot possibly dangerous areas.

Glaciers are moving, they are literally flowing. Crevasse are a result when this flow is getting influenced/restricted by e.g. elevation through rocks under the ice, different slopes or merging of different glacier flows. So it's all about the different flow velocity of the ice. This is similar to fluids. Being in your dinghy on a rock-loaded river, even when you can't see those rocks they will cause you some issues. Glacier ice is more or less solid and can only deform to a certain point, then it breaks and we are getting those inhospitable yet beautiful - this summer I was let off into one, it was impressive - crevasses.

There are mainly four types of crevasses:

A crevasse oriented more or less perpendicular to the long axis of a glacier. Transverse crevasses typically open on a valley glacier when the terrain becomes steeper, such as above an icefall. 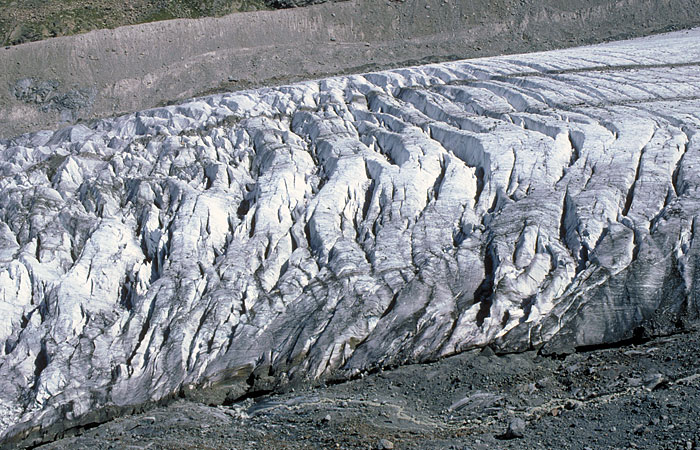 A crevasse oriented more or less parallel to the long axis of a glacier. Longitudinal crevasses typically open on a valley glacier when the glacier becomes wider. 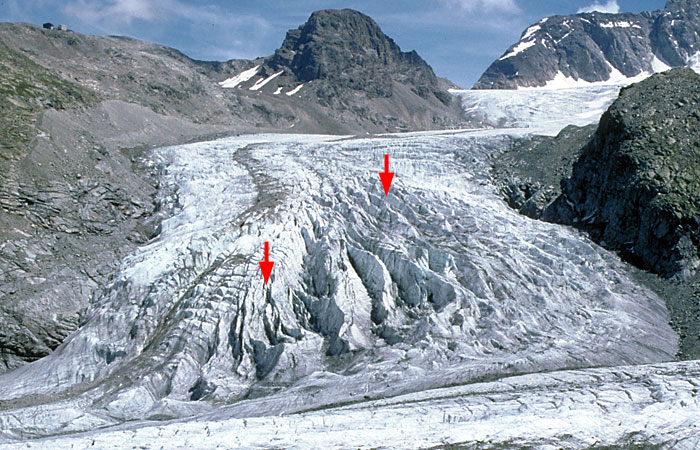 Series of crevasses oriented at an angle to the glacier margin. These form as a result of rotational strain within the ice along the glacier's edge.

They form due to the velocity difference (slower edge area compared to the faster main glacier) lateral to the moving direction of the glacier. 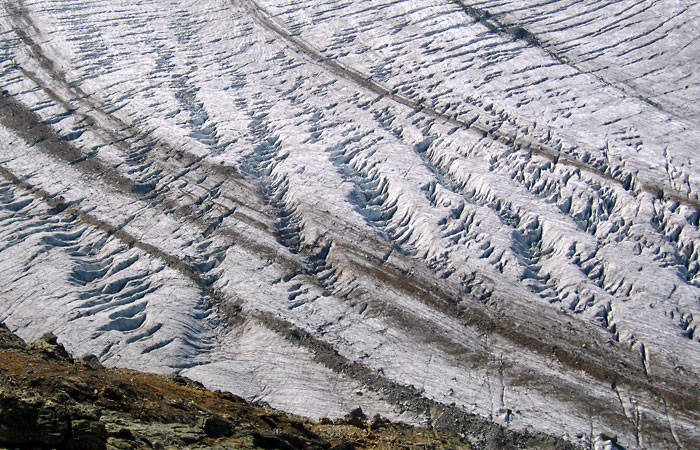 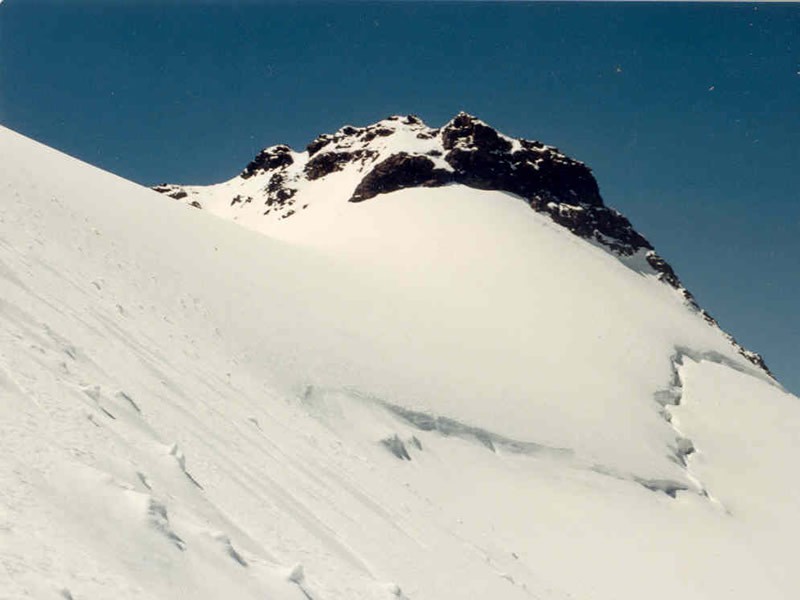 Sometimes shadows or shapes in the snow give away the location of covered crevasses. Sometimes you can detect a crevasse with a shallow covering of snow by poking with an ice axe or a probe of some sort.

The only sure way to detect if there is a crevasse is when you can see it, or when you fall into it when you cannot see it.

Its more important to know where to expect them. Under tension, Ice is brittle, and strong and in compression. Can we relate the tension and compression under the circumstances like gradient and slope?

At least I don't have a strong geology, so there no exact bullet-proof way of detecting a crevasse (unless you don't have a GPR with you :D).

You can actually afford to react to false alarms. In winters there is no way to detect one, as the ice is hard, so you have to make a way by probing the snow with something like an avalanche pole.

In later season, as the weather gets a bit warm, snow bridges begin to sag, so the ice that buries a crevasse, fall apart. You certainly do not want to go nearby a sagging snow bridge, since it may have a crevasse nearby. Along with that, undulations in ice, cracks on the snow surface in the glacier are something you need to be worried about.

Variations in the appearance of the snow can help detect where crevasses may be. It often helps to get a low angled light perspective such as at dawn or sunset. Depressions in the snow cover may be revealed by a different appearance. Fresh, wind blown snow or dust particles may collect in depressions which could indicate a sagging snow bridge. Crevasses appear most often in patterns. Where there is one there are likely to be more. Often the same patterns persist over many years so previous observations and photographs can be helpful to determine the more likely locations. Ground penetrating radar can be used to detect crevasses though such equipment is traditionally quite heavy and impractical in backpacking. Drones may be of use to detect visible crevasse fields and could possibly be equipped to detect hidden ones as well with the right sensors.

Not the answer you're looking for? Browse other questions tagged safety mountaineering glaciers crevasses or ask your own question.

10
Bivouac on glacier: how to be sure not to stand on a crevasse?
6
How do I tell if a glacier is safe for crossing?

11
How to pull one's partner from a crack/crevasse when skiing?
15
How to cross a 25 feet wide Crevasse?
19
How do I rescue someone out of a crevasse?
32
Should one attempt to rescue a stranger from a crevasse or wait for mountain rescue?
18
Crevasse rescue with knots in the rope
0
How to mitigate injury when falling into a crevasse?
10
Bivouac on glacier: how to be sure not to stand on a crevasse?
2
How much experience is needed for crossing the Mendenhall Glacier?
3
Comparison of dangers on the glacier in summer and winter
6
How to split 3-5 people into rope teams for glacier travel?