Are Rhododendron and Mountain Laurel truly toxic to burn in a campfire?

For a very long time now, I've believed and taught that burning Rhododendron or Mountain Laurel in a campfire will make you sick because of the toxins in these plants becoming airborne then inhaled around the fire. Many people I know that I trust also believe the same thing, but is this really true? My own research hasn't found anything definitive; most say yes, some say no. The plants most certainly have toxins in them, but most information pertains to ingestion of the toxins, not burning them.

This question is similar, but not the same. It's only answer also provides no references.

This stuff is everywhere in my region and it would be so much easier and quicker to gather firewood if it proves to be possible to burn the dead wood of these plants, and related species, without ill effect.

In addition, I'm really looking for more definitive information than anecdotal evidence. That type of evidence is certainly useful, but I really think this needs more than something that says, "I'm still here" type of thing.

Poisonous plants are typically more dangerous when you burn them, at least that's true with plants that have oily toxins (poison ivy/oak). Toxins in plants aren't necessarily vaporized when burned. Smoke is a particulate, not a vapour. If you are burning something toxic, the toxins can potentially be carried by particles of smoke and be inhaled which is far more dangerous than being consumed in some cases. Even dead plants can still be toxic.

The toxin in Rhododendron and Mountain Lily is Grayanotoxin. Every material safety data sheet I've looked at says that Grayanotoxin is fatal if inhaled. But that's for pure manufactured Grayanotoxin II.

That being said, this guy thinks Rhododendron makes great firewood:

"Another property of rhododendron is that it makes excellent firewood – even when it is green. It is a fast-growing hardwood with a very high calorific content, and the stems of larger plants are so thick that they can easily be sawn up into logs which are perfect for either an open fire or a wood burning stove. I have taken rhododendron logs home to burn in my woodburner during the winter, but a particularly good use for the rhododendron firewood is on-site, where I need to keep warm during the winter when I am there working. Burning rhododendron means that I can generate firewood as I am clearing the rhododendron from the woodland, meaning that I don’t have to have a big stack of it seasoning and I don’t have to cut down broadleafed trees and season them for use as firewood on-site, I can leave them standing and growing. So rhododendron has become my staple firewood, leaving the trees for better purposes." 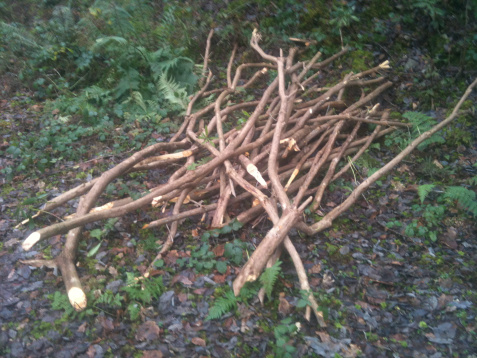 And the Scottish government recommends burning Rhododendron to control its spread as an invasive species, so it would appear that it is at least less toxic than poison ivy or poison oak when burned.

They say that one of the first indications of Rhododendron poisoning is salivation, I suppose you could have a campfire in your yard and see if the smoke makes you drool... But I think the fact that the guy in the Blog is praising Rhododendron as fire wood, that he burns indoors and is still alive and blogging means that it's probably ok to burn for heat outdoors. I probably wouldn't inhale the smoke though... or roast hotdogs over a grayanotoxin fire...

When burned the gryanotoxin is destroyed at temperatures of 150 degrees Celsius and above, and no evidence of toxicity has been found in the smoke or coals of the rhododendron plant. It is a hard long-burning wood and can be used safely.

However, inhalation of any smoke from any fire can have harmful health effects and should generally be avoided.

At least for some species, Rhododendron wood is not especially toxic when burned. I've seen (and used) many species of Rhododendron in the Chinese Himalaya as firewood, in both outdoor and drafty indoor conditions. This included seasoned and unseasoned wood, and large enough quantities of smoke that my Rite-in-The-Rain notebooks still smell like bacon.

While this doesn't directly address the question of burning Rhododendron wood, the whole idea that Rhododendron smoke might be poisonous springs from the idea that it is a very poisonous plant to ingest. And, while I'm not encouraging anyone to eat large quantities of Rhododendron, I suspect that the often-repeated stories about its toxicity are overblown:

Tales of poisonous Rhododendron honey go back literally thousands of years (and were even repeated in the 2009 Sherlock Holmes movie!), but don't apply to all species / methods: Rhododendron honey is common in the Himalayas, and made in Europe as well (it's tasty!). It's used in Asia and Europe as a medicine. Most of the modern cases are of people becoming sick from using medicinal-grade Rhododendron honey.

There's also evidence for species differences and processing effects (drying reduces grayanotoxin) on the toxicity of other parts of rhododendron, both from chemical studies, and again from my experience in the Himalaya, where flowers of some Rhododendron species are eaten and others considered poisonous, and leaves of some species used as animal forage and others for animal medicine. American Rhododendron vegetation is more famous for poisoning livestock, but this also varies between goats and sheep who show more ill effects, and deer with fewer. The toxicity seems to be even less in humans, and the cases of poisoning are in fact very rare.

Not the answer you're looking for? Browse other questions tagged camping health plants firewood or ask your own question.

14
Is campfire smoke safe for inhalation and cooking?
24
Which wood sources produce toxic smoke?
23
Best/safest wood to carve a spoon from?

33
How to create campfire which will burn overnight?
14
Is campfire smoke safe for inhalation and cooking?
7
What are the Pros and Cons of a Full-coverage Rainfly?
9
Are there any contaminates that become more toxic when boiled?
4
What are the pros and cons of greased feet in boots?
5
Hiking and camping with medium size dog and keeping safe from mountain lions
9
Different woods and how they burn/what if we are unsure of the wood?
38
Other than good shoes and a stick, what are some ways to preserve your knees on long hikes?
3
Are there any toxic berries that can be easily confused with the Serviceberry (saskatoon berry)?
1
Are you allowed to collect dead wood for a campfire?