What is the first thing to do, when buried in an avalanche?

Are there set rules I should follow which would increase my chances of survival if I get buried by an avalanche?

Should I try to do anything if I get caught-up in one, before it has settled?

The correct answer is to put your avalung mouthpiece in your mouth and inflate your airbag. If you don't have either of those things, then you are NOT properly equipped to be in avalanche terrain.

If you get caught in an avalanche when you are not properly equipped, then the best you can do is 'swim' like crazy to try and keep yourself afloat, and then bury your face into your arms as though you are sneezing and inflate your lungs as much as you can before you come to a stop. This will hopefully prevent suffocation from the snow pack squeezing the air out of you, as well as provide you with a small pocket of air in front of your face and give you a couple more minutes of breathing. It will also give you the use of your arms when you stop. You will not necessarily be able to create an air pocket afterwards, when an avalanche settles it can be as hard as concrete. Be sure to keep your mouth closed while you're in an avalanche as well, people have been extracted from avalanches with snow packed all the way down their throats to their stomaches, and up into their sinuses.

If you are skiing, you want to drop your poles and try to get your skis off if you can, they will only act as anchors and drag you down leaving you buried deeper.

If you want to experience getting caught in a tiny avalanche via GoPro, watch this video. This guy only got buried less than a metre deep in a small, slow avalanche of light fluffy snow, but he's still pretty helpless. This situation would afford you more time because the snow isn't packed, which gives you more breathing time because there is more air in the snow. You'll notice he is also able to create a pocket of air around his face, which isn't always possible. This doesn't give you more air to breathe, it merely displaces the existing air in the snow and helps dissipate the CO2 that you are exhaling (this is what the Avalung does, it vents your exhaled air behind you to prevent CO2 buildup around your face-which can give you over a half hour of additional breathing time). This guy probably could have dug himself out at this depth, but he didn't pop out of his skis, which I bet are anchoring him down in the snow. He also knows that his friends saw him get buried and aren't far away, so he's playing it smart and conserving oxygen by not struggling. It's important to stay calm and breath slow when you're buried in an avalanche, panicking will only kill you faster.

When you train for avalanche rescue you're taught that you have about 15 minutes from time of burial before the victim runs out of oxygen. So no matter what you do, in an avalanche, your life still depends on your friends finding you, so you'd better have your beacon on, with new batteries in it, and the people you're with had better know how to preform a rescue. NEVER go into avalanche terrain with out having proper avalanche training. 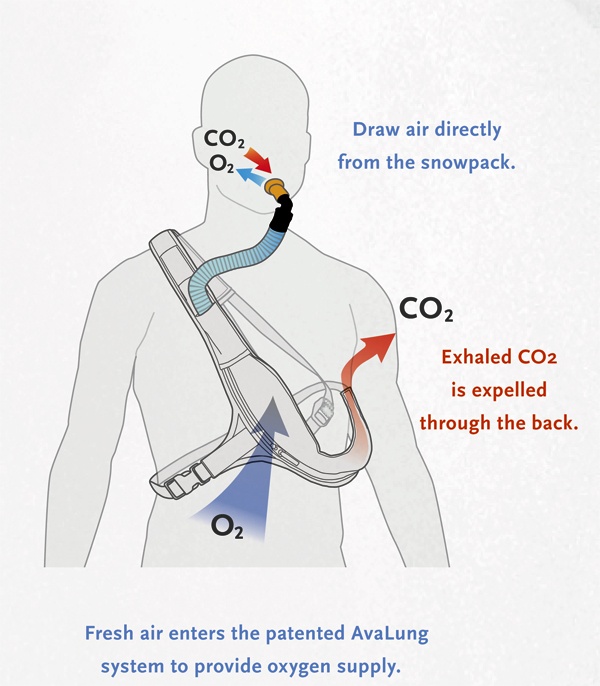 VIDEO: Freeskier survived avalanche accident with ABS Airbag (Notice in this video that the skier first attempts to escape the avalanche by shooting straight down the mountain to try and out run in and get out of the way of it's path. You don't get buried as deeply at the sides of an avalanche, so even just trying to get as close to the sides as possible can help your chances.) 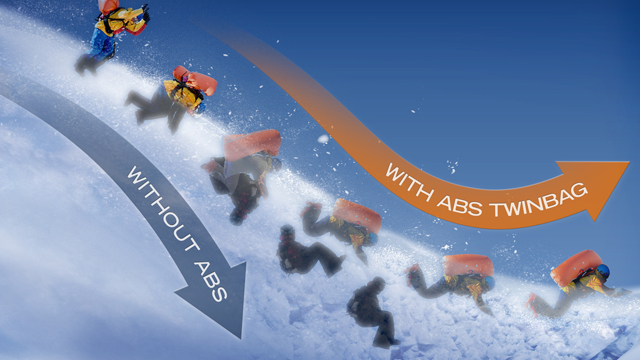 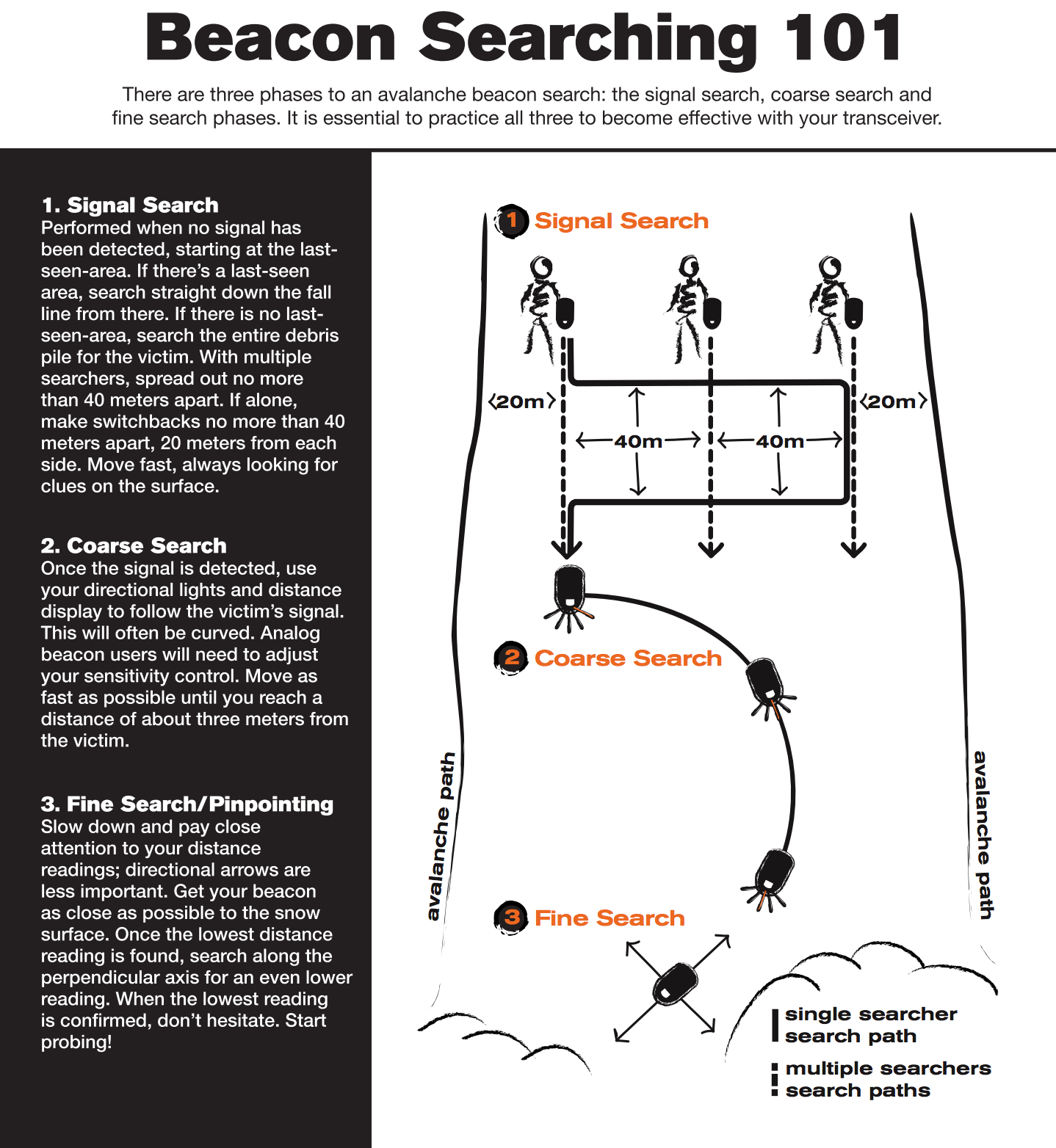 90% of avalanches are triggered by the people caught in them, if you are near the edge or top of the flow try and jump clear.

Hold off for as long as possible

If you can't get clear try and maintain your position for as long as you can. Get a hold of something, push your ice axe into the harder snow if you can, try and fight against the snow. The longer you can stay upright the less snow your likely to get buried in.

If you loose your position and find yourself being buried, try and swim and roll to the surface. Forget your ice axe, it's useless now, fight to stay as near to the top as you possibly can.

Get a hand in front of your face, try and maintain some kind of gap between your face and the snow. A lot of people die in avalanches because their airways become full of snow, they literally drown in it. As the snow begins to settle try to clear some kind of air space in front of your face. You might be able to wiggle your fingers enough to clear a space, do this before the snow "sets"

Once the snow settles it will set like concrete, you will not dig yourself out, so don't try. Relax (if you can) and try and keep calm, don't use your oxygen up. Most averlanche deaths are from slow asphyxia and hypothermia. You've got about 15mins to be found, so you won't suffocate immediately.

Your life now depends on your friends and people around you, so you need to be sure that the people around you know where you may be, how to get you out and have a good shovel and, also, preferably a probe to try and find you. So you and everyone your with needs to be prepared. If your heading into terrain that have avalanches, learn the risks, how to mitigate them and what to do should the worst happen. Training is key.

Not the answer you're looking for? Browse other questions tagged survival avalanche or ask your own question.

18
If you are buried in an avalanche will you survive?
10
Inexpensive ways to learn cross-country skiing

16
Are there any specific guidelines for edible plants in North America?
18
What are the first aid precautions to be taken in case of a snake bite?
18
If you are buried in an avalanche will you survive?
12
How much does body fat actually insulate you against the cold?
7
How can I make an obsidian knife?
9
What types of food make for good emergency rations that I can store in a car?
4
Suvival: logs/wood, split or not to split?
15
Is there a practical risk when wearing an avalanche beacon on your top layer?
4
What first aid steps should you take for someone who faints after being injured in the cold rain?