Avoiding building a belay anchor too low down

Sometimes when I'm trad climbing it seems really tough to avoid an awkward belay, and a common type of awkwardness is when the belay device ends up too low. Below is a drawing of a situation I was in recently. 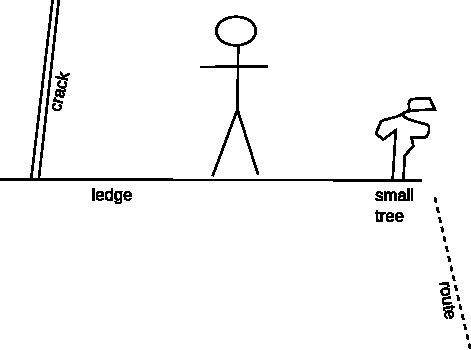 The tree was small, and I didn't want to depend on it all by itself. To back it up, the only other placements I could find were in the crack. So I ended up with an anchor where the belay device was basically inside the tree, at my feet.

What would have been a better way of setting this up? In general, what are strategies for avoiding a belay anchor too low down?

If the crack was good enough for your anchor all on its own, there are a couple of ways to use that:

Neither of these are perfect, and they do add friction to the system (unless you have a pulley).

Note that this is essentially the "directional protection" part of ShemSeger's answer - except that we don't have high expectations of the tree to actually hold a fall.

I don't know what the rules are where you climb, but those kinds of situations–where you find a bomber belay point (comfy ledge), but no suitable anchor points–are where I'm temped to bolt an anchor or two. I like to keep a couple pieces of hardware on me specifically for when I need to make an anchor where there's no natural protection, and I'm an advocate for developing routes. There are purists that frown at fixing protection on popular trad routes though, which isn't much of a problem up here climbing wild rock on crown land, but I imagine more of a problem if you're climbing high traffic routes in national parks. In my opinion, there's nothing wrong with bolting proper belay stations.

What belay method you use can vary on the availability of anchors and risk of fall potential. Depending on how bomber that ledge was, and if there was low fall potential (your second has a good chance of catching themself if they fall) you could have used a hip belay, which I recommend backing up to your harness using a klemheist on the feeling or guidehand. 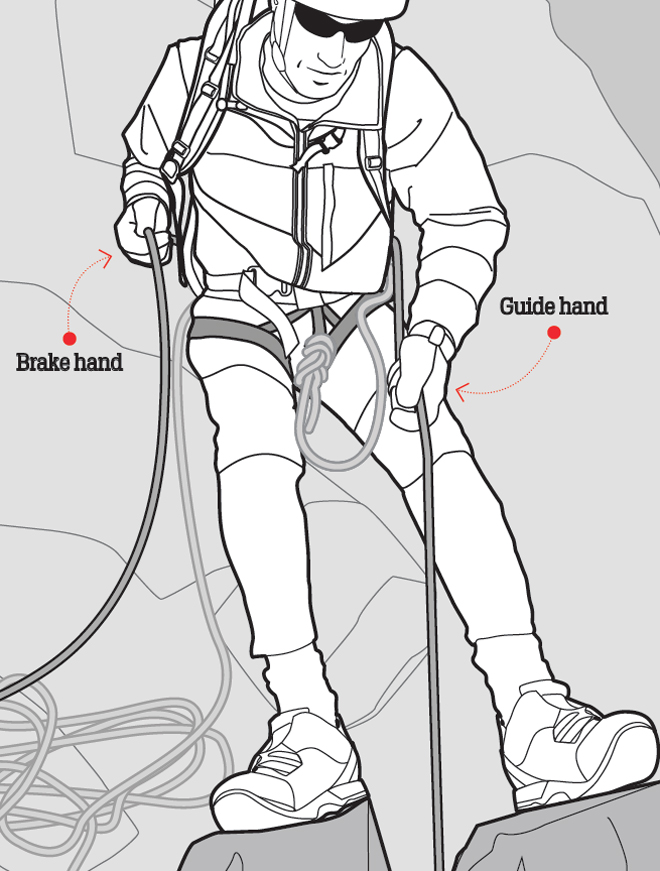 What you described is certainly an option, I imagine when you said you were belaying between your feet, that you had an equalized anchor in the crack, and were possibly sitting nearer to the tree, tied into the anchor using a locking carabiner and clove hitch while belaying between your legs like the illustration below. 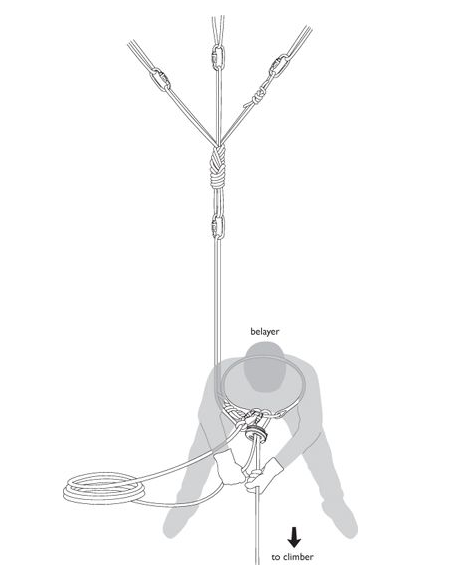 I have difficulty imagining why the route wouldn't follow the crack though...

The most important thing to remember is of course to always set you anchors to load in the direction of pull if your second were to take a fall. In the situation you've presented here, where the good anchor point (crack) is to the side of the route, you could avoid swing and control the direction of pull by placing a directional piece of protection. 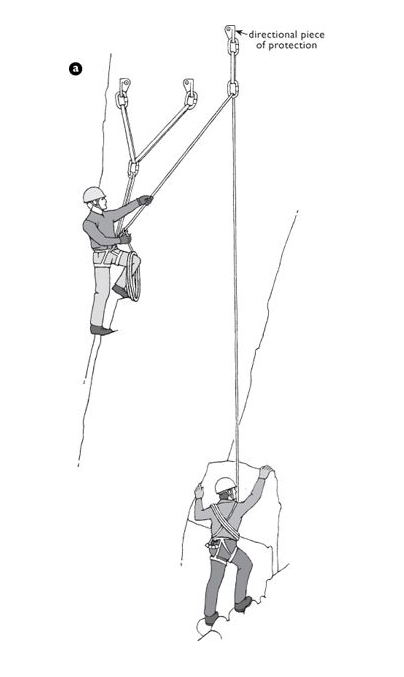 Before you climb up onto the ledge place a solid piece of protection that will control the direction of pull, then set up a solid semi-hanging belay stance over in the crack. This will allow you to belay to the side of the climber, but it eliminates a swing if they take a fall. You could have even used that tree as your directional piece of protection, just throw a sling around it with a locking biner or a couple of quickdraws. As long as you test it out (give it a couple firm kicks/yanks) and it feels like it could hold, you could use it, just maybe not as your main anchor.

Setting anchors is more of an art than a skill. A good trad climber needs to have excellent problem solving skills to be able to take advantage of everything at his disposal, I love going out with old veteran climbers just to watch them place anchors and set up belays, I always learn something new from them. It's amazing to watch decades of experience at work, if I were to use a corny analogy; I'd say it's like watching a master paint a perfect landscape.

Whatever you end up doing, you'll eventually find something that suits you best. Just stick to the anchor building mantra and make sure every anchor is SRENE.

Illustrations from Freedom of the Hills - "The Bible of Mountaineering."

Mate if I got it right what you made was even worse than the American Triangle of Death: http://en.wikipedia.org/wiki/American_death_triangle

The solution there, would be using only the crack by placing some (3 or 4) pieces there.

If you hadn't enough pieces to stick in the crack, it'd had probably been safer with a single piece of gear in the crack and nothing else, than with one piece there, and the other one on the tree.

14
What's the best way to swap lead when climbing in a group of three using a pair of half ropes?
16
Placing protection efficiently when leading trad?