How to check if a fence or cable has electricity without having special tools?

You run across a wire cable, or wire fence in the wild, with which you would have to interact in some way. How to check if electricity runs through it without having special tools?

EDIT: As the question states it could be a low-voltage fence however I could be checking some sort of cable that I happen to find going over a cliff, which I would like to use as a 'bridge'. (So question includes very high-voltage check too :) ) ...hand-testing shouldn't really be an option...

TL;DR - First try to identify if the wire is supposed to carry electricity (insulators on posts/wire goes to an electrical box/posted warning signs/ect...). There's really not much you can do to check the wire for current without a device aside from listening to it, touching it (potentially dangerous), or throwing something onto it that might react to a current (something wet/metallic/living/etc...). Maybe hold your arm close to see if your hairs stand up? If you have a compass, you may be able to use it to detect a magnetic field around the wire depending on the type and flow of electricity. These methods will only confirm that there is electricity in the wire, but without proper equipment, you can't really confirm a wire isn't charged, and you're operating under assumptions and risk shock by touching the wire.

If you're asking how to identify an electric fence, the answer is that there will be insulators on the posts. Plain wire fences are just stapled or tied to the posts. Also, if the fence emits a powerful enough charge to hurt you, there will be caution, warning, or danger signs posted. 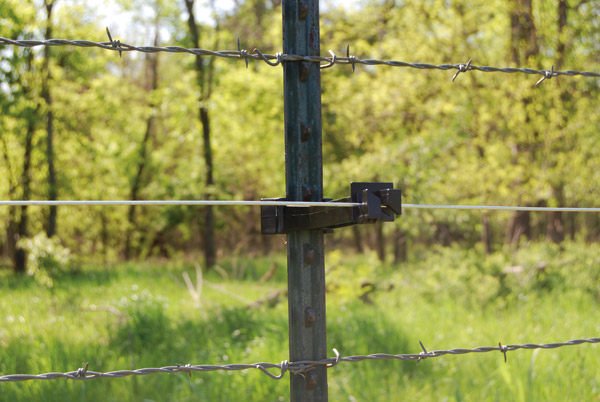 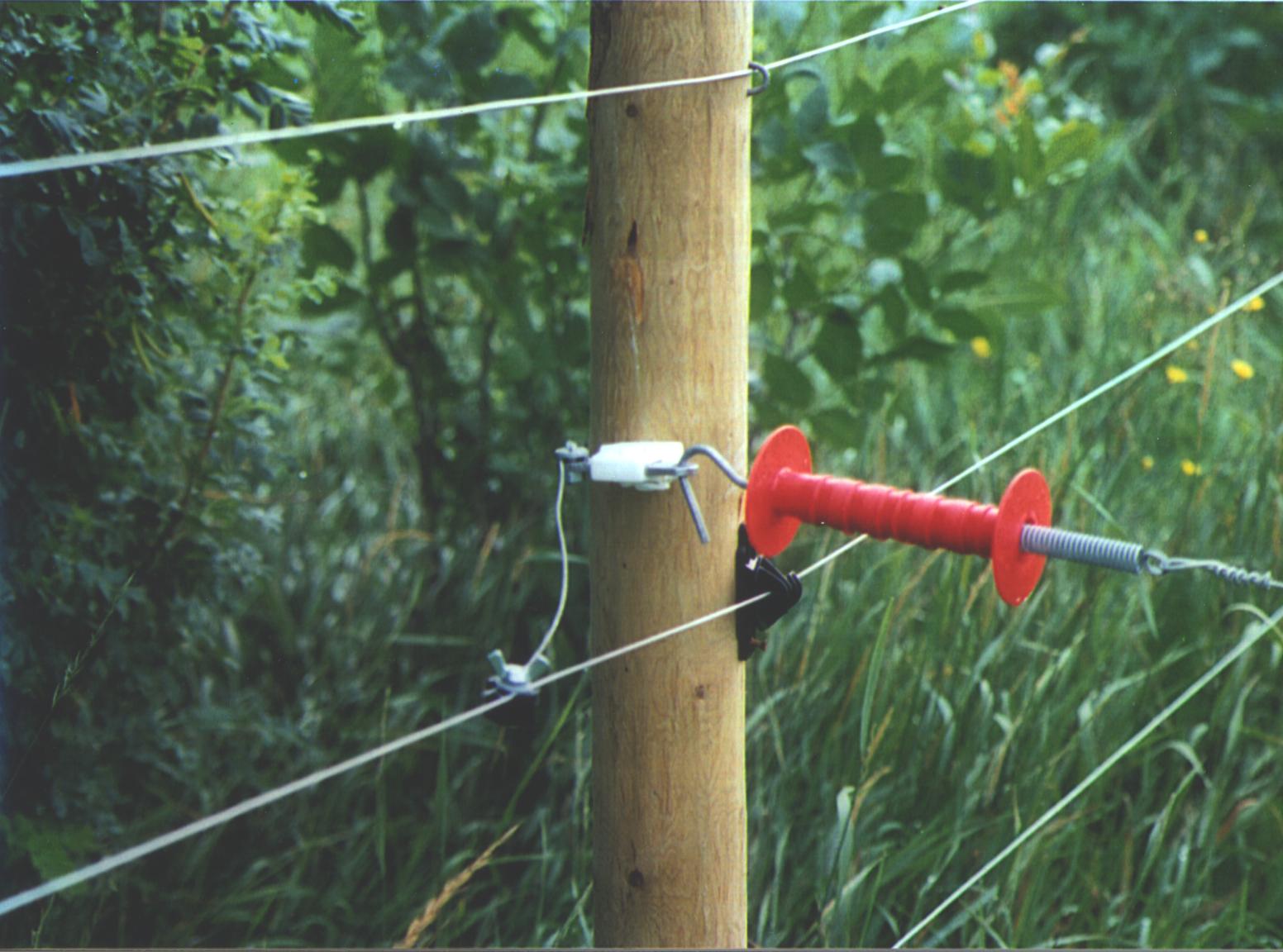 I've climbed over electric fences plenty of times, they use them out here to deter bears from getting into certain areas (like the local dump) and keep deer out of crop fields. First few times I climbed through one I felt nothing, so I thought it was turned off (I was a kid at the time). It wasn't until I was holding two wires wide apart so that my dog could get through and touched the back of my hand to the wire above it that I got shocked.

The thing about being a human is that you're typically insulated against the ground to some degree because of the rubber soles of your boots. Electric fences only really work if you're grounded or touching more than one wire. Even if you do get shocked, it's meant to smart, not injure, at the very most you might get a little red burn. Electric fences don't use a constant current, they pulse, sending out shocks that don't feel too dissimilar to a shock from a BBQ sparker.

Of course this is only true for fences designed to keep animals at bay, if you encounter an electric fence designed to keep humans out, they will typically have big signs indicating that they are charged and will hurt you. Razor wire at the top is another give-away.

EDIT: In response to edit by OP. If you happen upon a cable that you might want to use for a crossing, first of all, use common sense. Ask yourself, "Why is this cable here?" Is it meant to carry electricity, or does it have some other purpose? Your number one priority is still to identify if it is an electrical cable or not. In my part of the world it's common to happen across a forestry cable car for crossing creeks or canyons: 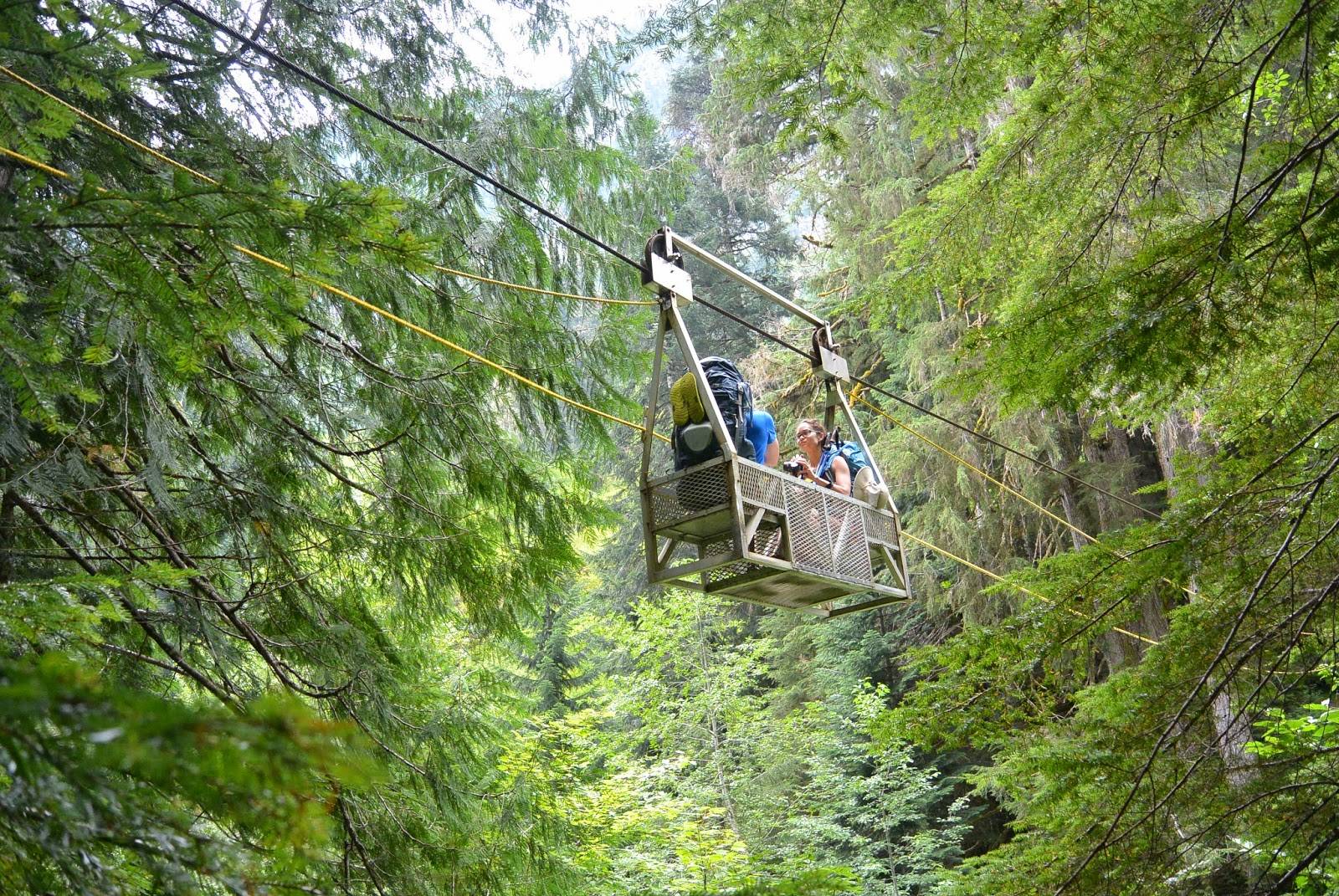 But they're typically a dead giveaway, the cables don't extend beyond the anchors, and there's a basket with pulley wheels.

You are not going to be able to easily access high-power electrical cables, they're put high up on poles for a reason, and won't necessarily carry your weight. The biggest giveaway that a cable is carrying a lot of electricity is that it will hum. Every power cable I've been under in the backcountry is easy to hear especially if it's raining or snowing.

To be brief: there's not much you can do to safely detect electrical current in a wire without some sort of a device, but something that you may have on your person if you're in the woods, is a COMPASS which you could use to check for an electrical current. Hold the compass near the wire, the magnetic field will move the needle if there is a current in the wire.

Growing up in rural New Zealand, we often encountered electric fences. Some of them were illegally high-powered to deal with big animals.

We tested fences either with the back of our hands or with a piece of grass.

As specified a few times in this question (thanks @Michael Martinez), using the back of the hand is for safety. An electric shock can cause muscles to clench. If you place your hand around the wire and get shocked then you risk being unable to unclench your hand. Using the back of the hand, with the palm away from any wires, means that if a shock clenches your muscles then your hand and arm move away from the wires.

An anecdote: A mate of mine grew up on a farm used for Sweetwaters (a popular music festival a few decades ago). He says that the combination of stoned hippies and electric fences was extremely entertaining.

In answer to another question above, I have a cousin who peed on an electric fence. It was not a pleasant experience (for him, anyway, his mates were laughing their heads off).

I understand your question such that you are asking about fences for livestock and alike, not high-security fences. It is your responsibility to check if you could get in danger. If the fence looks like it was made to withstand humans and/or aggressive animals, I suggest not to touch it with anything.

Apart from that (I have actually never seen a fence like this), you will probably deal with the standard pasture fence. I has a couple thousands volts, which sounds like a lot, but a really low current. It cannot injure you if you do not have a special preposition (like a pacemaker). So there are different ways of dealing with that kind of fence:

Handle electricity with care. You are responsible for what you do.

a fence for horses or cows, Take a grass straw, wet it a little bit, hold it against the fence, if it ticks in your fingers it means the power is on. i always do that do double check before put my hands on the fence, if im fixing it and say someone else turned it off.

Very easy, get a pair of headphones and put them on your ears, then holding only the rubber part touch the fence with that headphone jack. You should hear a click if an electric current is in the fence.

I have never heard of someone legally setting up a fence with a strong potential good enough to be fatal. That said, it is very much a possibility that the fence might severely injure (or worst case kill) a dog or some small animal (Pets when hiking?). In such a case, one indeed needs to be worried about an electric fence.

First things first. If responsible owners (or authorities) have bothered to put a board of instruction which says that it is a live fence, trust them and do not take a calculated risk. Secondly, Look out for people around who might know if it is a live fence. Confirm and proceed.

You may receive horrible advice such as throwing up some metal on it, if it sparks, it is alive. That might work as well, but then the owner would cause you more trouble than the fence itself.

If I am in such a situation, my best bet would be the humming sound they make. Its a minor hum, you will have to get closer carefully in order to hear that.

How much does a tester cost? I always have one in my waist pouch, comes handy in thousand ways, right from fixing solar lamp battery boxes (I meant tightening the screws on the boxes) on the trail (if they are loose), till opening a beverage glass-bottle if I don't have an opener.

They are called weed burners for a reason. Find a long stiff weed. drop it across wire with leaves. In 15 min you will know as to damage to the leaves. Remove weed with long stick,

Not the answer you're looking for? Browse other questions tagged safety survival wilderness or ask your own question.