While reading Hermann Buhl's tour book* of the Nanga Parbat expedition in 1953 (yielding to the first ascent on third of July, Buhl did the final ascent solo) I got curious about the height difference he made and therefore created following plot: 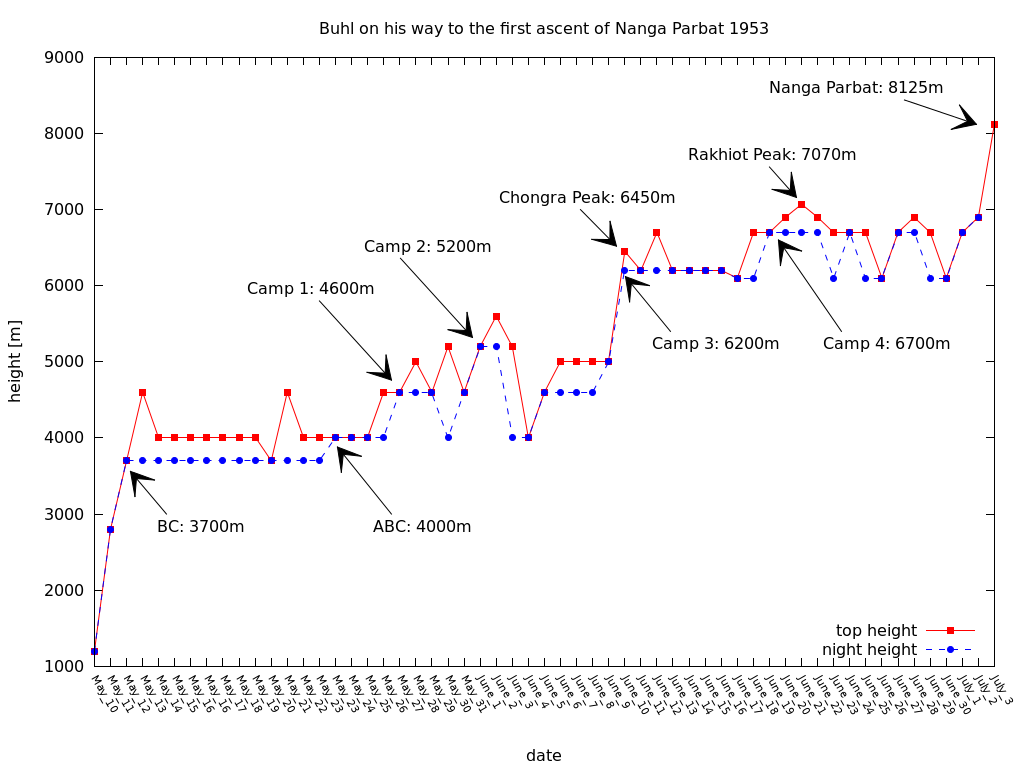 So they needed 6 weeks to get the gear for the high camps up the mountain, struggling with the weather, Sherpas, expedition leaders and the gear itself. Of course we can't compare nowadays expeditions to the old days and the expedition of Buhl was complicated but still I am asking myself

The expedition of 1953 wasn't having the infrastructure modern expeditions have but nonetheless I am interested how the effects regarding acclimatization are. I would assume Buhl was extremely well acclimated when he started to go for the summit.

*The book I read is this one, I am not sure but possibly this is a translation into English.

I'm going to assume your question is geared towards high altitude (20,000+ ft) climbing. Haven't done any myself but this topic is covered at length in almost every book written regarding Everest and the other 25k peaks.

Is this style of complicated looking height progression done nowadays too?

A common mantra for high-altitude acclimatization is "climb high, sleep low". A modern graph of a typical climber on Everest would follow a similar pattern, yes. The amount of oxygen in the air decreases as you climb up. Sleeping lower than you've climbed is the best way for your body to recover from the shock of taking in less oxygen during the stress of the ascent. During the night you'll be inhaling a greater percent of oxygen than during the day. It's similar to exercise training using heart rate intervals.

If so, is it done due to acclimatization?

Primarily due to acclimatization, yes. To a lesser extent, it is used to fix ropes and stash gear (oxygen, fuel, food, sleeping accommodations).

How did acclimatization strategies change over the last decades in general?

Not much. "Climb high, sleep low" fundamentally hasn't changed. Its the most scientifically proven acclimatization strategy. There isnt much agreement as to why some acclimate better than others from a genetic or preparation standpoint for most of the population living at <5000 ft. There are some medications which will alleviate the symptoms of high altitude sickness, but in a sense they dont really acclimate you any better. I've also read about some sleeping in a hyperbaric chamber.

Buhl is considered a forbearer of modern "alpine style" climbing, in his day norm for climbing 25k+ peaks was to "siege" the mountain with an over-abundance of porters, gear, and camps, gradually establishing camps up the mountain. This typically took several months. "Alpine style" climbing took over in the 70s, led by Reinhold Messner. The general idea is to climb light and fast, establishing less camps and minimizing the time spent above base camp. It's certainly possible that an elite modern climber could progress straight up - but many expeditions now are guide/client (especially on Everest) and in these cases they normally have 3-5 camps above base.

A good overview of altitude sickness and best practices to acclimate can be found on Princeton's website.

The graph looks exactly like a bunch of graphs in House and Johnston, Training for the New Alpinism, pp. 334-337, except for the scale on the time axis. The ones in House and Johnston are for modern climbs that are not done in "siege style." They even have one for Nanga Parbat, which covers a time period of about 35 days, from 3700 m to the summit. It looks like Buhl took about 50 days. So it looks to me like nothing fundamental has changed, and although Buhl may have taken somewhat longer because of the expedition style, he was already not that far away from the maximum speed that you can do, simply based on human physiology.

Did Buhl spend a significant amount of time waiting for good weather?

Not the answer you're looking for? Browse other questions tagged mountaineering high-altitude acclimatization or ask your own question.