What crampon front-point setup options are specific for various types of ice climbing?

Is it a matter of personal preference, or are there advantages to using different front-point setups on your crampons specific to what you are climbing?

For example, I'm still just getting into ice climbing and I have a pair of DMM Terminator crampons, which can be setup a variety of ways; dual front points, mono point, offset mono and mixed mono. They also come with bolt on heel-spurs, for doing things that I will probably not be doing anytime soon.

What are the advantages to these different setups? I understand that mono points are preferred for mixed and dry ice climbing, I can see offset mono points being useful climbing overhanging ice or ice columns, but could someone please list exactly what these different front-point setups were developed for? 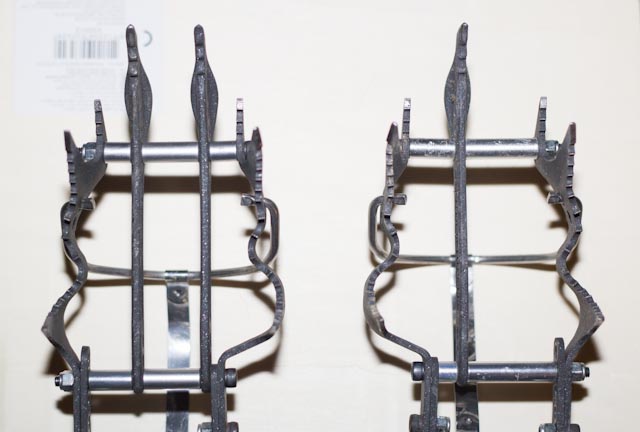 The single point setup was developed to aid in very high technical levels of mixed climbing. Dual points can make it hard to keep the crampon on small rock holds. Also in certain kinds of ice, the monopoint can get a better grip.

The various other setups are attempts to make a compromise between getting full grip in the ice and staying stable on rock.

My ice climbing experience is 30 years out of date, but I can see the advantage of being able to tweak the front point setup for various climbs and conditions. With any luck someone with more recent experience can chime in on exactly which setups are optimal for which conditions.

There are many different crampon geometries. While the exact choice comes down to personal preference, let's discuss the canonical choices and intended uses. I will limit my discussion to automatic/clamping crampons intended for climbing, ignoring discussion of strap-on crampons for general mountaineering and bolt-on crampons for high-end mixed climbing.

Some manufacturers attempt the best of both worlds by adding a horizontal gusset to the back of a vertical front-point (e.g., Black Diamond refers to this as a "hooded front-point"), with the idea of having vertical front points for ice and the gusset engaging snow when penetrated deeply.

Horizontal front-points can also have a niche use case for exceedingly thin smears of ice over rock, as they can almost chop out a miniature ledge in ice that is too thin to get any penetration with vertical front-points.

The distinction between dual and mono front-point setups is more subtle than the difference between horizontal and vertical front-points. Further muddying the distinction are crampons that have a dominant front-point and a smaller secondary front-point (e.g., Grivel Rambo) and adjustable setups (e.g., the crampons pictured in the OP). We'll restrict our discussion to mono vs dual setups.

The basic choice between mono and dual front-points is generally that of precision (mono) versus stability (dual), with the exact ice conditions (and personal preference) dictating which attribute is more desirable. Many of the hardest ice climbs in the world have been done with both monos and duals.

The precision of mono front-points excel on irregular terrain, the paradigm setting example being that of mixed climbing / dry tooling. By having only a single point, a mono crampon allows for precisely slotting into pockets, cracks, fissures, and small edges on rock. In contrast, the secondary point on dual crampons might entirely prevent the crampon from securely using these features. This distinction also carries over to highly featured, chandeliered and candle-sticked ice, where dual front-points might require seeking out small patches of uniform ice. Mono front-points can also be useful on steep uniform ice by allowing you to "draft" your former ice tool placements with your mono front-point. This can be especially beneficial for very dense ice (where kicking out a placement involves significant effort).

I also find mono points beneficial in very brittle ice that is prone to "dinner plating," as the single point tends to disturb less ice and allow fractured ice to easily exit to the side. In contrast, dual front-points tend to break more of this brittle ice---especially the ice between the front points. The counter-argument is that dual front-points allow for a more secure placement in these tenuously brittle conditions once a suitable placement has been excavated.

The conditions that dual front-points excel in would be something like a uniform flow of ice in plastic hero conditions. The amount of stability gained by having two front points (especially in resistance to twisting) can be quite significant, resulting in better security and less fatigue. Dual points also spread the load over more of the ice, which can be quite useful for thin smears and steep snow / neve (although not quite as well as horizontal front-points).

Dual front-points might be preferred for a day of WI3--4 in good conditions or a long couloir climb that involves steep neve and long sections of AI 2--3. I also think that the added stability of dual points is much easier to learn with and much more confidence inspiring.

Mono front-points might be preferred for a route that involves any extensive mixed climbing (perhaps strongly preferred) or hard routes that have formed with extensive candle-sticking.

Not the answer you're looking for? Browse other questions tagged gear crampons ice-climbing or ask your own question.

19
What style crampon should I use for my hiking boots and how do I adjust them?
9
What are the options for stopping wetsuit booties becoming water logged?
3
What are the suitable choices of crampons for Scarpa Charmoz GTX Women boots?
12
Why are unequalised anchors acceptable for fixed-point belay systems used while ice climbing?
10
What to look for in an ice axe for use in classic alpine terrain?
7
What are the advantages of horizontal front points on crampons?
11
What are the use cases for ski crampons over boot crampons?
8
Are there gender-specific climbing harnesses?
1
What types of ropes are there for multi-purpose camping that are strong?
2
What are the different types of camping for a beginner?