If you are buried in an avalanche will you survive?

Obviously, my best chance of survival is in not being buried, but if I am unfortunate enough to become buried in an avalanche what are my chances of surviving it?

There have been quite a few studies on this. There are various factors that will affect this, these include:

Baring the above your chances of survival are linked to the time spent buried under snow.

That all said, the good news is you will likely survive under the snow longer than you think:

The only finding giving grounds for optimism is that the initial survival probability is much higher than previously assumed. Indeed, of the 123 skiers extricated within 15 min, only 8 were dead and, moreover, only 2 had died of asphyxia (extrication times 10 and 15 min), whereas the remaining 6 skiers had all sustained fatal injuries during descent of the avalanche.

The important time frame is the first 15-35 min:

The rate of survival then typically slowly decreases. One factor in this slowing of the death rate is the effects of the cold on metabolic rates:

If you're lucky enough to survive intact in an avalanche, "death is (typically) due to a combination of "slow asphyxia" and hypothermia."

So the important thing to remember is to find and get people out as fast as possible (while still staying safe yourself). "Professional help should be sought immediately after, but not during, the (15 min) critical phase."

If you can summon help immediately after someone is buried in an avalanche, without leaving the site, I would argue that doing so is probably better. Cell phone, emergency light, radio, anything you have on hand to draw attention to the predicament. Even a ski stuck in the snow might very well help

Bear in mind these are survival rates, there is still a chance of potentially severe injury. Lack of oxygen to the brain can cause permanent damage, even if you do survive.

Only 1 out of 10 survive Avalanches

If you are completely buried in an avalanche the odds of survival are slim, unless you wear a transceiver (beacon), and you have partners that escaped the avalanche who have the right gear (beacon receivers, probes, and shovels) as well as the experience from practicing with them to save you. Statistics show that the chances of them rescuing you alive are about one in ten.

If they do not die as a result of trauma by hitting trees and rocks on the way down (around a quarter of avalanche victims die from trauma impact injuries) completely buried victims begin a desperate race against time as asphyxiation and hypothermia set in, and the statistics show that only 28 percent of avalanche victims that do not die of trauma survive being buried.

You may have heard that you should spit and see which way the saliva runs across your face to try and figure out which way is up, then dig in that direction, but typically it doesn't matter which way is up because you will be effectively entombed, as if frozen in concrete and unable even to move your fingers, so it is highly unlikely that you can dig yourself out. In the vast majority of cases there are only two ways for completely buried victims to get out of the snow - to be dug out (are you wearing a transceiver?) or to melt out.

It was once believed that you had just a 50 percent chance of being dug out alive if found and rescued within 30 minutes, but as rescue times have become shorter and shorter it seems you need to be dug out much faster than that to have a good chance of survival. Statistics now show that 92 percent of completely buried victims can be revived if recovered, within the first 15 minutes, but only 27 percent are alive after 35 minutes.

Most contemporary research shows that around half of the victims are dead within the first 25 minutes. Bear in mind also that brain damage starts well before death - perhaps at 10 minutes for the average victim - and there are plenty who emerge unconscious and blue-faced when dug out after only five minutes. The pressure of the snow packing itself can easily squeeze the air out of your lungs, effectively suffocating you in a very short amount of time.

If you are buried more than 6 feet deep, your odds are almost 0%. It is unlikely that you can be dug out in time.

If you are alone and caught in an avalanche, or your entire groups is caught and buried, you will most certainly not survive. The only chance an avalanche victim has of surviving complete burial is IMMEDIATE RESCUE. If no one witnesses the avalanche, or the witnesses are not equipped to mount a rescue, and have to go for help, then the situation quickly transforms into a body retrieval effort. 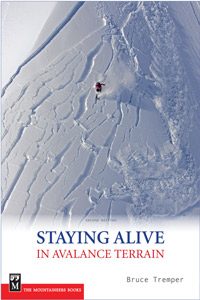 21
What is the first thing to do, when buried in an avalanche?

10
Are there significant behaviour differences among bear species to adopt different safety rules?
16
How to prepare for and survive wildfire?
21
What is the first thing to do, when buried in an avalanche?
10
Why are death percentages of death from trauma in an avalanche so different between USA, Europe, and Canada?
10
Quality/robustness of avalanche shovels
4
How do you get into a prone position without catching your crampons?
27
Do electronics interfere with avalanche beacons?
5
Titanic survival, ice cold water?
15
Is there a practical risk when wearing an avalanche beacon on your top layer?
19
Surfacing out of a sunken ship/submarine - Survival Tips