What knot is this one? What are its purposes?

I stumbled across it and I saw it in a showcase. I couldn't recognize it. It looks like it's a way to tie fixed loops in the middle of a rope. 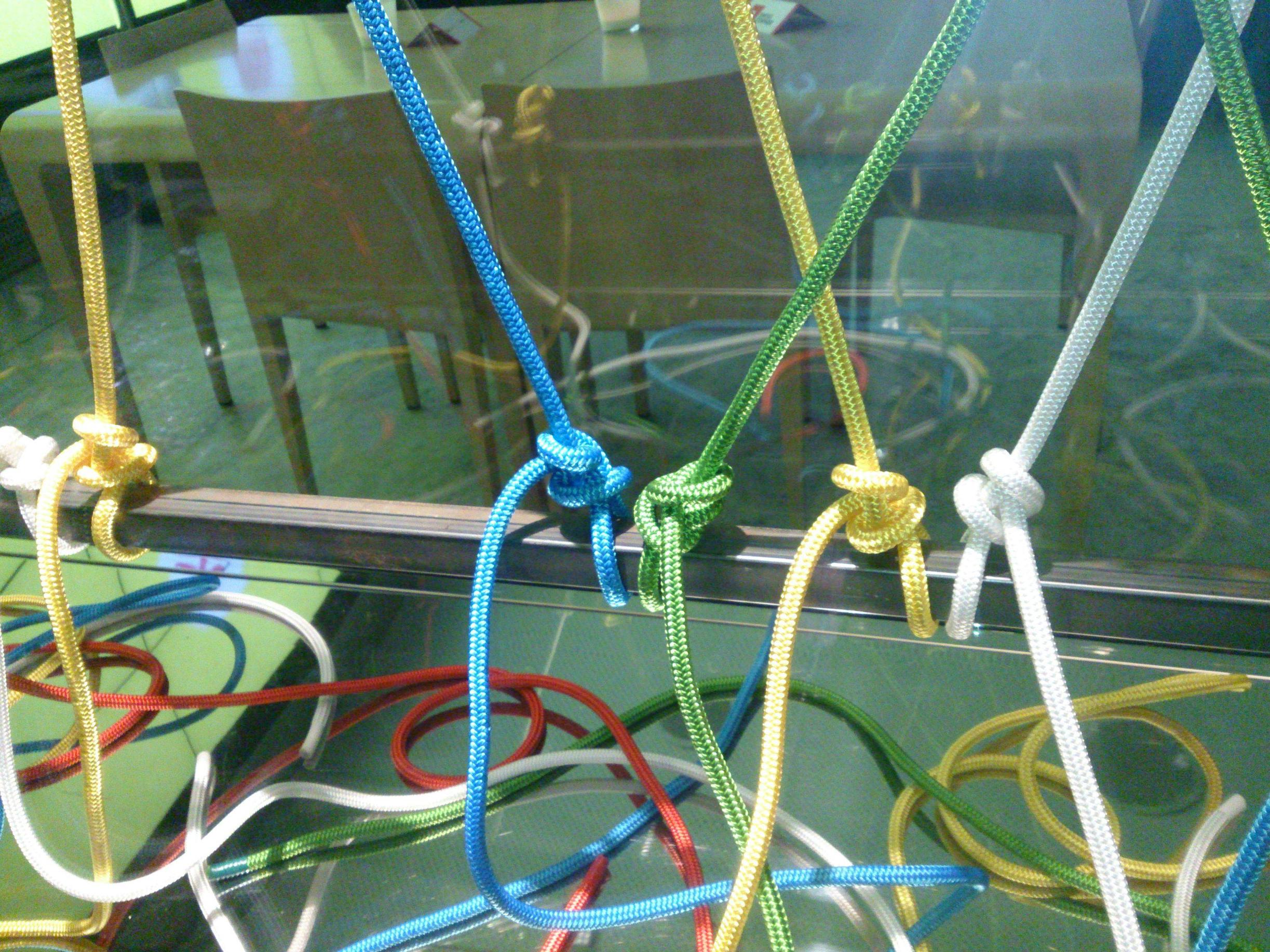 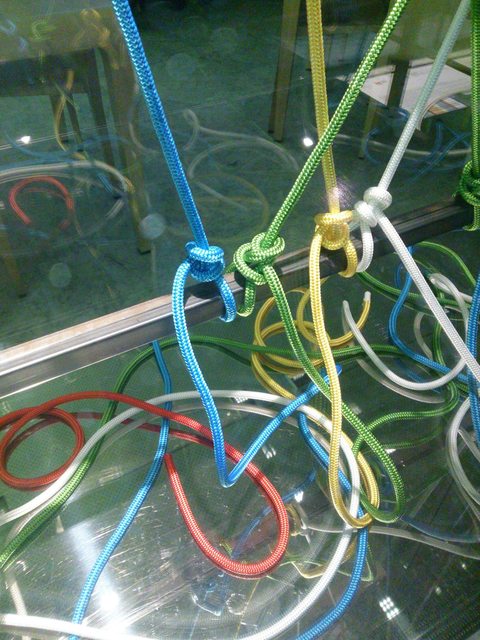 It's undoubtably a slip knot that's been tied off with a half hitch. some of the knots look different because some are tied off right-handed while others are left-handed. Compare the image below to the second image in the question: 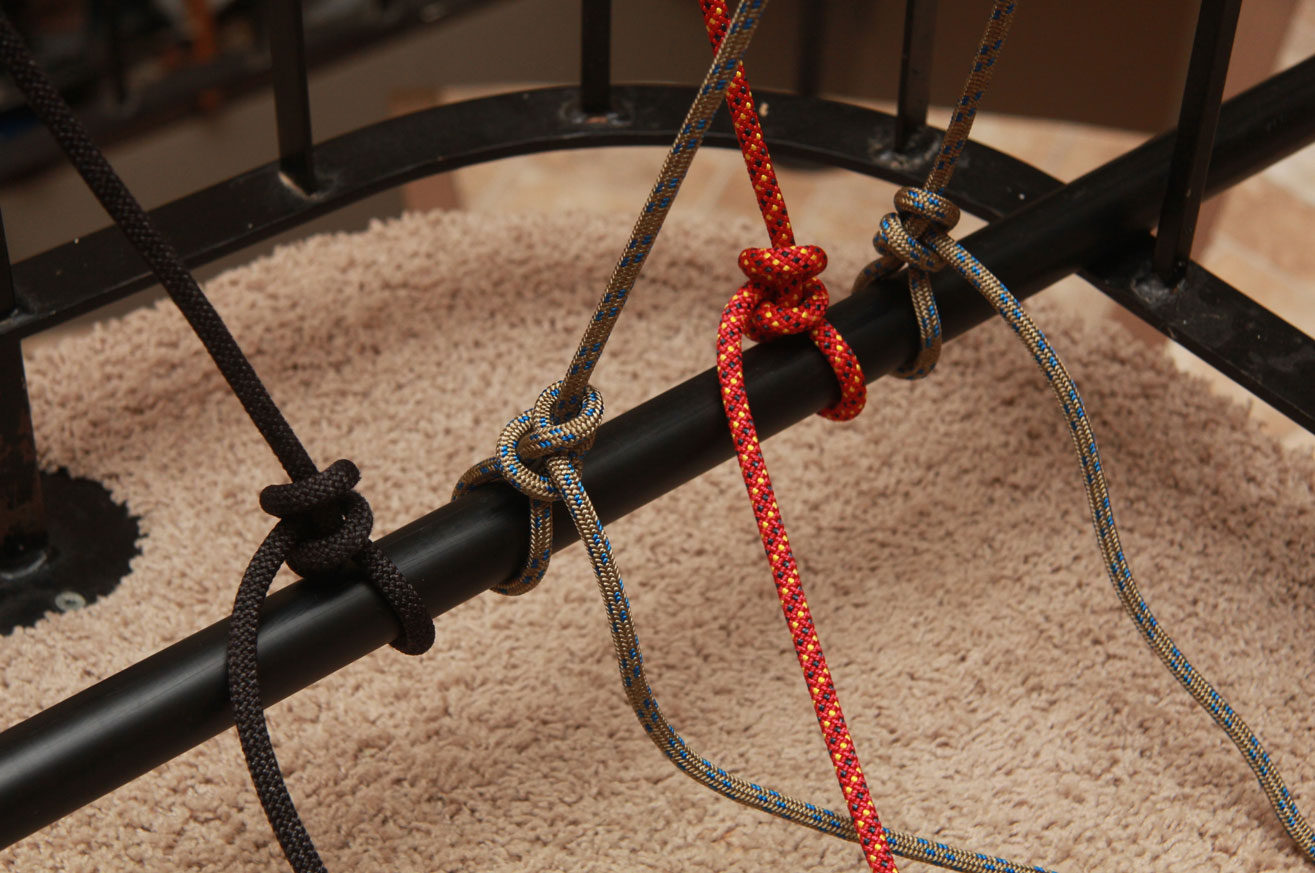 I think I even know why that knot was used in that display case too. Whoever made that display and tied the knot is obviously artsy or crafty, and probably crochets. When you start a crochet you tie of your yarn to the hook with a slip knot.

Imagine the picture below with the tail end tied off with a half hitch: 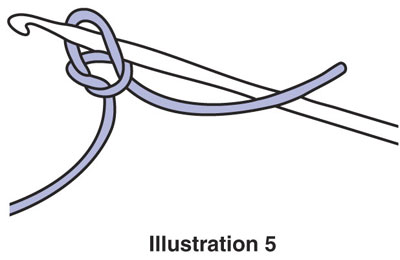 I don't know what's being hung in the display case, but the same person probably pre tied the overhand knot in the rope to mark how high to hang whatever it is they're hanging, then wrapped the tail end around the bar, fed it through the over hand knot, snugged it up the the bar then quickly tied off the tail with a half hitch.

They are examples of a round turn and two half hitches. Sometimes known as an anchor hitch or a fisherman's hitch.

A Useful Boating Knot: A Round Turn and Two (or more) Half Hitches (ABOK # 1720, p 296) is useful for attaching a mooring line to a dock post or ring although probably less secure than the Anchor (Fisherman's) Hitch.

Not the answer you're looking for? Browse other questions tagged knots knot-identification or ask your own question.

7
How do I tie a bowline knot?
13
What is the preferred knot for cinching a hard item to your car rack?
6
What's this knot called?
8
This isn't a double overhand loop — what is it?
14
Why are eye friction hitches not commonly used in rock climbing?
8
Does leaving a knot in a static cord damage the cord as it does with dynamic rope?
0
How to tie a Purcell Prusik from a single end?
3
What knot was used by my mountain guide to tie me in to the middle of a rope?
4
What is this knot?