I just discovered there is a way to rapell (e.g. for crevasse rescue) without any equipment building a snow bollard: 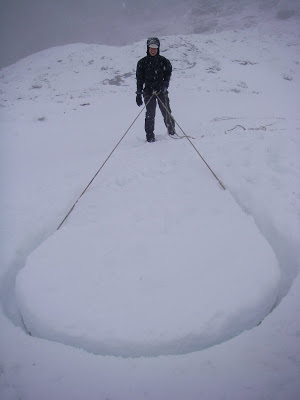 I don't know if anybody uses this to rapell without backup (e.g. on top of a climb). But if so I would like to have some idea how secure this setup will be.

I have used them heaps for Rappelling, and am more comfortable using a Snow bollard than any other single anchor. I have seen snow stakes bend under the load of one person, ice screws pull the ice off the rock. I have seen deadmen fail when the knots came undone (might have been incorrectly clipped 'biner) (students on that course got a valuable knot tying lesson as free extra) .....

In an instruction coarse we would build them smaller and smaller till 3 or 4 students could make them fail. Even in really soft conditions I never saw one that size fail, and when they did fail, it was pretty clear it was not going to hold. Anything you can walk on rather than wade though is more than strong enough. The strength not only comes from the weight of the snow in the bollard, its from the bond that snow has to the undisturbed snow below the trench. Its critical there are no weak layers in the snow close to the depth of the rope or the whole bollard can slide off in one piece. Dig a test hole twice the depth of the trench and look for weak layers - if there are any, and you cannot get below them, the snow is unsuitable.

The trick when building them is do not step or disturb in the middle. Dig the trench deeper than you think it needs to be and slope the side so the rope goes deeper into the snow. Obviously back the bollard up for the first rappel - just like any other rappel, only the last one down needs to take the risk a single point failure. (If in doubt, the second to last down can place gear so if the top anchor fails the last guy is protected).

In really soft snow, the only other options are dead men and burying a pack. If you are repelling no option but to leave gear behind. Not sure about you, but I don't carry enough gear to leave a pack behind at every repel.

An option if you are worried about the rope getting stuck on retrieval (apart from a smaller bollard) is sacrifice a long sling around the bollard and rap off the sling.

I'm not super experienced with snow anchors, but basically a snow bollard can be a bomber anchor if the snow is hard -- hard enough that you have to use an ice ax to chop the trench. You can back it up using one or more objects such as ice axes or pickets, to make it more difficult for the anchor to fail by having the rope cheese-grater itself through the snow. You will need to remove these before the last person raps off, so usually the lightest person raps off last.

A snow bollard is actually a stronger anchor than a dead-man or picket, but it will be very time-consuming to construct. In soft or fresh snow, a picket can be made at least somewhat strong by filling in the trench with snow and working the snow; however, I would not want to rappel off of one, especially if it wasn't redundant. I believe a snow bollard is more commonly used as a rappel anchor, because it's strong. Because you're rapping off of it, you can't fill in the trench with snow as you would with a picket, because then you wouldn't be able to pull the rope down. Even though you're not filling in the trench, one of my main worries about using a bollard would be that there would be too much friction to pull it down, especially if the rope entrenches itself in the snow where it goes over a ledge.

Not the answer you're looking for? Browse other questions tagged safety winter snow or ask your own question.

18
How do I rescue someone out of a crevasse?

14
Measuring a dangerous snow slope
15
Is there a technique to snow-shoeing besides “walk on the snow”?
12
Why should I carry a snow anchor?
9
Dozens of dead little spiders in the snow
3
How do I judge what fabrics used to make ear warmers mean, in terms of their function?
11
First time snow hiking
31
What gear should I carry along for winter emergencies?
6
Which is more dangerous, icy roads or icy roads with snow on top?