We already have topics on fuels here and here which give quite an overview. Also REI gives some info how to choose your stove and fuel properly.

Still I would like to know what are the best options for my stove/fuel setup if I want to melt snow for drinking and cooking meals on a multi-day trip in high altitudes (over 6000m) with cold (under -20°C) and windy conditions. Weight, seizure, error-proneness and ease of usability of the equipment counts as well as the heat output efficiency. The stove should be sufficient for 2-3 people.

The standard expedition stove for extreme conditions would be an MSR XGK. You will likely want to bring a pair of them, along with a repair kit, on the assumption that due to the cold or poor quality fuel you'll break a pump or need to make other repairs. Now, you may be thinking "what are all those people doing with canister stoves on Everest/Aconagua/Olympus Mons?" Well, it's true; many people use canister stoves like an MSR Reactor or WindPro with an isobutane/propane mix at altitude.

There are a few not-so-obvious reasons behind why someone might turn to a canister stove, most having to do with the altitude. First, being above 6000 meters means having less oxygen to work with. This means your stove will likely burn rich (yellow flames, less complete combustion). The lower air pressure will help offset the colder temperatures which normally present issues for canister stoves. It also means your brain will have more difficulty with complex tasks, so the simpler the stove, the better. Finally, it means there are a limited number of places you might be: the Himalaya, Andes, or on Denali, and that may affect what fuels are available as well as the likelihood of being forced to cook inside your shelter.

Fuel Availability: If, for example, you are in the Himalaya you may only have kerosene available, and not white gas (naptha). Kerosene will have more issues with the lower oxygen levels at high altitudes (particularly around carbon monoxide production), and will also make a bit of a sooty mess (of course, so does white gas). It is also a fairly dirty fuel and may clog your stove, necessitating more frequent repair. Regardless of fuel type, if you bring a liquid fuel stove you should also being a repair kit.

Cooking inside and carbon monoxide risk: While every stove will come with clear warnings about how unsafe it is to use it inside an enclosed space, this sometimes becomes a necessity in mountaineering. This warning is mainly out of concern for carbon monoxide (CO) poisoning, but there is also the risk of catching your tent on fire. (Silnylon is particularly vulnerable to fire, and flareups do happen.) Thus, lighting a liquid fuel stove with its usual priming "fireball" becomes problematic. (You really don't want to use a white gas stove inside a tent!) If in-tent cooking is a likely possibility, you should have a good grasp on how to mitigate the risks of CO poisoning through proper ventilation and fuel management. In theory canister fuel should produce less CO than liquid fuel, but this is also affected by stove design and the pot used. Often CO production can be also reduced by raising the pot about an inch above its normal position, to allow for more complete combustion.

Know that this is an easy way to end up dead, so you should know what you're doing before trying it, and only try it if conditions are such that cooking outside your tent would also make you dead! I suggest reading this thoroughly as well: http://zenstoves.net/COHazard.htm

Cold temperatures: Regarding the temperatures, you still want to use a winter fuel mix for canisters. Usually this is a 30% propane, which vaporizes around -40 degrees at sea level, and includes isobutane (boils around -12C) as well as the traditional butane which boils around 0C. However, higher altitudes mean lower air pressure and thus the fuel in a canister will vaporize (boil) at lower temperatures (just like water does). For example, the -12C vaporization point of isobutane drops to -27C when at 6000m.

It's often described that in cold temperatures only the propane will burn off, leaving just the butane. Gas mixtures do not actually behave that way; they instead form a blend: a 70/30 mix of butane and propane will have a boiling point atound -18C. The propane will vaporize at a greater rate, however, and the "boiling point" of the blend slowly rises, eventually becoming that of pure butane (because that's all that's left). Using a stove that allows inverted operation will help avoid this, as you are burning the canister fuel in liquid form. More reading at http://adventuresinstoving.blogspot.com/2012/04/gas-in-cold-weather-myth-of-fractioning.html

If you do use a stove that allows inverted operation, don't just flip the canister over. Stoves that allow this route the fuel through a pre-heat tube that passes through the flame in order to vaporize the fuel for burning. This means you need to let the stove run with the canister upright for 30 seconds or so until the tube can properly pre-heat. Be careful when turning over the canister; sloshing fuel can easily cause a flareup!

Still, you will often need to take steps to warm the fuel. Always remember that too much heat will make the canister explode. You should start with always keeping at least one fuel canister warm against you or in a sleeping bag. An insulated base for the stove also helps with both temperature and stability. To maintain output while cooking, you should have a stove with regulated output (i.e. as the fuel cools it opens the throttle to keep the pressure up). Setting the canister in about an inch of water should also provide a temperature buffer to help keep the canister from going below freezing. Warning: Extreme Danger Here! Some people use more interesting methods to heat the canister, including hammering flat some thin copper tubing and using it to bring heat from the flame back to the canister or using a handwarmer.

If you are applying heat to the canister, remember that the canister should never be too hot to touch, and you should always have a (nonfrozen) hand on the canister to make sure of this. ("Too hot to handle" is usually around 42C; expect the canister to have a "core breach" around 50C, and realize that dents and low air pressure at altitude may cause it to rupture before it gets that hot.)

High winds: Stoves like the MSR Reactor are particularly good for handling wind, but with other stoves cases you'll likely want a windshield. With canisters you are often cautioned to make sure the shield does not cause the canister to overheat, but in cold weather this can be helpful. Just remember to monitor how warm it gets!

Lighting your Stove: You may find that piezo ignitors and other fancy lighters stop working due to the cold or altitude. I suggest having multiple starting methods; a simple mechanical Bic lighter kept warm close to your body is good to start with, and a ferrocerium rod + striker makes a good backup. Waterproof or stormproof matches make a good third choice.

For cooking at cold and altitude, the pressurised liquid fuel stove is your friend.

They're expensive and need some skill and care in use (practise before you take them into challenging situations), but they will perform much better than alcohol or canister stoves when the going gets tough.

Here's a video that gives a good overview of how they are used. As you can see, it's quite a fiddly process. They require priming before use, and regular cleaning afterwards. The fuels are dangerous, so it's very important to read the instructions and apply good disciplines in use. If you get casual, bad things can happen!

If you are using the stove in a first world country, you would want something like the MSR Whisperlite which is optimised for clean fuel: 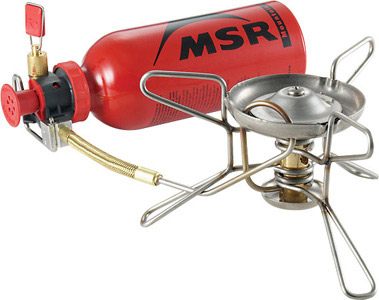 For expedition work in countries where fuel might be dirty or hard to find you'd be better with a stove like the MSR XGK EX Multi-Fuel. It's heavier and more expensive, but much more adaptable. In a country like Nepal where fuel is notoriously dirty, you would want to take spare fuel filters. 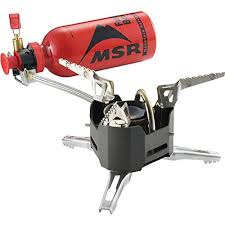 There are also models designed to facilitate simmering, and Universal models that can use both canister and liquid fuel (though these tend to be less efficient).

These stoves are sophisticated pieces of engineering so stick to established suppliers like MSR or Optimus - this isn't an area where you'd want to be experimenting with cheap ripoff products.

Pressurised liquid fuel stoves should do the job down to around -20c. Below that you'll probably have to warm the stove and fuel inside your clothing before lighting.

For high altitude base camps you could consider pairing up the stove with a lightweight pressure cooker, if weight isn't too much of a constraint.

As the elevation increases, the boiling point of water drops. This makes cooking times increase enormously.

You may want to essentially ignore cooking, and rely on cold food, and warm drinks.

The whisper light is a good stove for such events. I have also used regular gasoline at low temperatures, but due to the explosive nature of fumes, I would never do so in an enclosed space.

If you use stoves where the bottle is not the fuel tank, be very careful filling the stove:

When I ran winter trips (at much lower elevations) we had a rule that the person who fills the stove, doesn't light it. And also that you filled the stove 40 feet away from camp, down wind if there was perceptible wind, or down hill if calm. (Fuel vapor is heavier than air.)

For cold and high altitude, you will want to use white gas. White gas is superior to other liquid fuel options (kerosene, etc) and will be easier to get started in the cold. Your lightest option for this is probably going to be the MSR Whisperlite. There are plenty of options though so just go with what suits your budget and weight constraints.

12
Which type of cooker to use above 6000m?
3
High Altitude Cooking - Most efficient fuel and stove type
27
What's the difference between white gas, propane, kerosene, and gasoline?
27
What are the advantages and disadvantages between gas, liquid and solid fuel?

15
How does the Esbit stove perform in cold & wind?
9
Will gelled fuel work in a cat can stove?
12
How do I light a spirit (ethanol) stove when it's cold?
9
Which fuel burns the cleanest? Can I use E85 for an MSR stove?
7
Avoiding leaks from stove and fuel bottles?
6
Ski setup for skijoring
4
Setup for solar powered battery generator
4
What features should I look for in a solar cooker for dim daylight conditions?