I have just got Grivel The Tech Machine Ice Axe. It comes with Ice blade by default. Mostly I am going to do Mix climbing on granite in Norway with Ice climbing occasionally.

Do you recommend to get Mix blade additionally? What are drawbacks of using Ice blade instead of Mix blade? 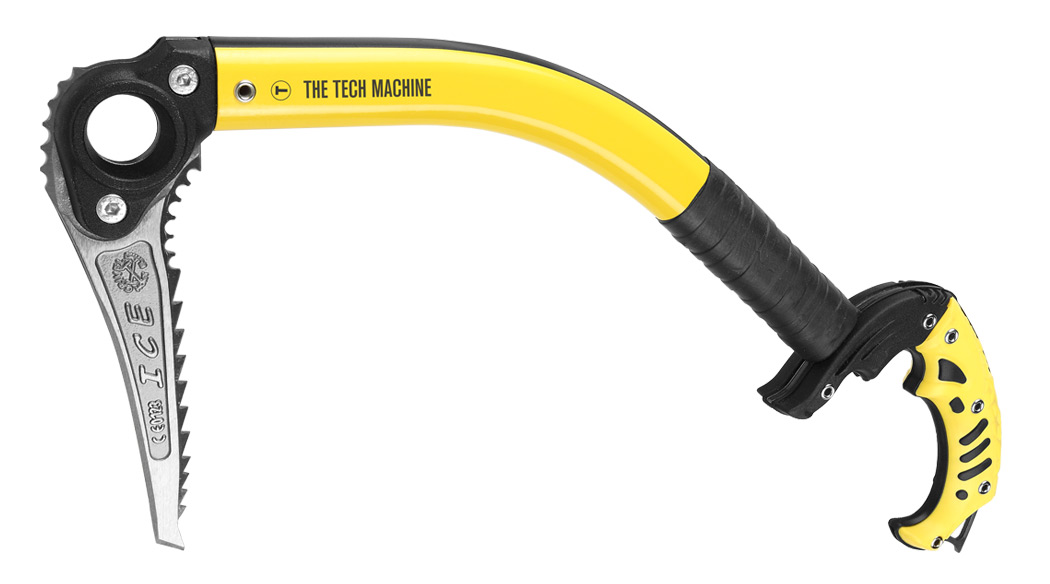 Ice blades are designed for penetration, mixed blades are modified to help you also get a good bite on rock without doing to much damage to your tips.

Will Gadd–who is considered to be the best ice and mixed climber in the world (watch him climb the hardest mixed climb ever here)–has this to say in his book:

For mixed climbing I generally keep my pick completely stock, as it came from the shop, except for the angle of the first tooth, being especially careful to make the tip hook extremely sharp and square. A pick filed like this will place tremendous amounts of force on the rock as you hang on it, which will help it hold on even smooth edges. If I have to climb a delicate icicle at the top, I'll also set the tip up for best penetration, but this means the pick will crumple easily if I hit rock. In general, I run two sets of picks: one fairly stock for working on routes and general climbing, and one for those desperate redpoints and sick icicles. Very thin cracks sometimes demand a very thin pick, and I'll modify mine to fit them, but this makes the pick quite weak when torqued in the same crack. One day we'll have picks as thin as knives that will take any degree of abuse, but until then we'll be going through a fair number of picks each season.

As you said, you can buy mixed blades now, so there's no longer a necessity to modify a blade for mixed climbing. If you know you're going to be switching between ice and rock, then I'd recommend running two picks. Using a pick designed for ice on mixed routes will blunt the tips very quickly, and you'll end up having to file it down like a mixed blade anyways, and then you won't have the same penetration for climbing ice routes. Having two sets of picks will mean less maintenance in the long run.

Mix climbing on granite in Norway with Ice climbing occasionally.

That means you have mostly rock while on the mixed climb? If this is the case I would advise to get a mixed blade.

What are drawbacks of using Ice blade instead of Mix blade?

Ice blades are very thin and have a conical shape. Even when they are brand-new you should most likely file them to get your blade as sharp as possible. The prior isn't necessarily true because you could have the problem to release the blade from the ice. After filing the front tip it will be extremely sharp (dot-like). Some people remove this tip so the ice tool won't enter too much. This depends on the type of ice of course. To save energy while trying to get the tool out of the ice this can be very important. That's also the reason why you shouldn't forget to file the back (top) of the blade so you can release the tool by levering away from you in the plane of swing.

Ice blades are designed to penetrate very easily and to avoid breaking the ice. Some are even B-classified because the robustness of the blade isn't the main concern. If you aren't going to abuse the ice tool by side-wise lever or torque, it will still last a long time.

Mixed or dry tooling blades are designed for rock, thus for robustness. Without taper at the top the material is thicker in general. You don't have to file them as sharp as ice climbing tools because you don't want to penetrate the rock as you penetrate ice. You place the mixed blade on small rock irregularities, often you will wedge it in cracks and therefore have high loads on the material. An ice blade will break more easily, at least it will get blunt faster. The lifespan of your blade will therefore decrease if you use the ice blade in rock especially in hard rock like granite.

Referring the answer of @ShemSeger: If you are going to push the limits and climb extremely thin cracks and hard maneuver, you are therefore able to climb very difficile/careful and you have no problem with wear (and money) you are free to use the ice blade on rock. But I think most of us won't compare ourselves with Will Gadd ;)

23
How do I know what size ice axe I should get?
20
How to make DIY ice axe protectors?
13
What this instrument is used for?
9
What crampon front-point setup options are specific for various types of ice climbing?
8
Opening a beer bottle using a mountaineering ice ax
11
Rope between legs while leading on rock, ice
17
Any reasons not to use 30-year-old ice axe?
9
Where do you place ice screws?
12
Backpack for both ice tools and snow shoes
30
At what angle should an ice screw be screwed into the ice?