Which camp fuel type is the easiest on your stove?

In reference to this question: Avoiding leaks from stove and fuel bottles? What fuel type is the easiest on your stove as far as cleaning and maintenance are concerned?

If you have a stove that can burn more than one type of fuel, which type will have the least negative effect on your stove and on the o-rings in your bottle?

Rather than the type of fuel - any stove designed to run a fuel will run it with little maintenance, but the quality is important. I had to strip and clean my cooker, that had never had a problem, daily - at 6000+meters due a batch of bad fuel.

Best option for trouble free cookers is Gas (Butane/Propane) - the cannisters are sealed in the factory the fuel cannot get contaminated after that. The major downside of gas (poor cold temperature performance) have largely been resolved with modern cookers with anti flare tubes.

If, like me, you prefer liquid fuel, a multi fuel burner designed to run a wide range of fuel types is best. If you then use clean, high quality White petrol (Naptha) it will run trouble free for years with a lot of neglect. The security of replacing O Rings periodically is worth the few cents they cost, as it a good clean and flush of the fuel tank.

In general 'lighter' fuels with less additives will mean that the stove needs less cleaning. Most of the reason I've needed to clean a stove is from additives which don't burn properly (particularly when igniting the stove) can can block the nozzle and things.

For this reason compressed gas (not gasoline) is probably best, followed by Coleman fuel (white gas), petrol (gasoline) and paraffin (kerosine) bring up the rear. I haven't really used paraffin enough to know which is better.

Having said this the biggest risk is that most multifuel stoves (at least the MSR whisperlite) have different nozzles for different fuels. Using the wrong nozzle is the easiest way to block it, particularly using the white gas/petrol nozzle for paraffin.

The other big source of soot is lighting the stove. If the stove needs preheating to burn this involves burning fuel under atmospheric conditions. The fuel burns inefficiently and will produce lots of soot. Once it is burning well little soot should be produced.

I'm not sure if fuel type has a significant effect on o-rings etc. I wouldn't think it is significant. The only advice I've been given on that is to not store your fuel bottles pressurized. There are probably several reasons why this is a bad idea but forcing fuel into the seals for a long period isn't likely to do then good.

Conclusion: If you use it well any fuel shouldn't require much more maintenance, but gas and white gas are probably easiest.

My personal preference is for gasoline (yes, even ethanol added). I've never had to clean any of my stoves since I started using it. Given that the quality is pretty closely monitored and regulated in the US this is an extremely consistent, clean burning, and cheap option. It's also extremely easy to find...

It should be noted that the "white gas" available for purchase in lots of stores is pretty similar to low octane gasoline, but is priced at 17$ per gallon instead of 2.25$. In my experience it burns about the same (maybe just a tiny bit better), but any marginal advantage isn't worth the cost. Octane of the gasoline used doesn't seem to make any difference, nor does 10% ethanol.

Alcohol is a very clean fuel.

Possibly the easiest camping stove to maintain – and very easy to make – is the alcohol stove (aka spirit burner). It's just some form of cup with ventilation – no pressure, no pipes, no nozzles.

This is a pot sitting on such a burner: 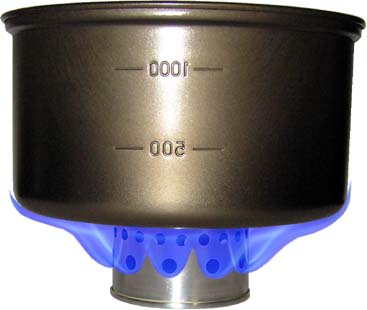 Possibly the most comprehensive reference for alcohol stoves is Zen and the Art of the Alcohol Stove.

Not the answer you're looking for? Browse other questions tagged stoves fuel liquid-fuel-stoves canister-stoves or ask your own question.

28
What's the difference between white gas, propane, kerosene, and gasoline?
7
Avoiding leaks from stove and fuel bottles?
4
What are the different names for and sources of alcohol for my stove?

9
Which fuel burns the cleanest? Can I use E85 for an MSR stove?
9
How to use all the fuel in a bottle with a MSR Whisperlite Internationale?
7
Avoiding leaks from stove and fuel bottles?
11
What is the most efficient DIY alcohol stove for narrow pots?
11
Camping stove with plane allowed fuel
7
How do you refill your alcohol stove while it's burning?
13
Using "unusual" liquid fuels in a multi-fuel stove
0
Primus Omnilite liquid fuel stove: can't prime with 0.25 jet