I recently gave a belay from above to a group of five people who were all doing the same single-pitch climb and then being lowered off. (In this case the reason for belaying from above was that the climb was too long for top-roping from the ground with a single rope.) I was using an ATC Guide in guide mode, directly off of an anchor. Afterward, I went back and researched different methods for doing the lowering. Any comments on the following methods, or suggestions of other methods?

Don't even lower people in guide mode. Reserve that for emergencies. When the climber gets to the top of the climb, have them clip in, then switch the belay device to normal mode and lower them off. This requires redirecting the brake strand like this: http://www.climbing.com/skill/lower-away/ . (If I'm understanding correctly, the redirect is necessary because otherwise you would need to pull up on the brake strand to brake. That's both physically more difficult and contrary to your muscle memory.) You can attach a backup prusik to your belay loop.

BD's instructional video http://www.youtube.com/watch?v=KM5c9wlTReo shows the technique at 2:37. They show the belayer using her hand to pull down on the release cord, which has been redirected through the anchor. I found this technique to be extremely fatiguing due to the large amount of force required from my hand. They also show a Munter tied to the harness used as a backup.

This instructional video http://www.youtube.com/watch?v=G3zOisWbuB8 shows yet another technique. There's some discussion here: http://www.mountainproject.com/v/anyone-have-problems-lowering-a-second-with-atc-guide-or-reverso-in-guide-mode-/106715350#a_106718389 . He ties the release cord to his harness, so that his hands are free and he can apply the force to the release cord by using his body weight. He then has both hands free, and can use them to tend a Prusik backup.

What do people think? I haven't tried method 3. It seems nice, but I'm worried that in the event that the belayer slips and inadvertently puts his body weight on the release cord, the only thing saving the climber's life is the Prusik.

In the BD video, they show a Munter rather than an autoblocking knot such as a Prusik, which seemed odd to me. After some dialog in comments with Shem Seger, I'm going to write up my attempt to analyze this issue in an answer.

Just to be clear, what you are describing here is top-roping while belaying from above. Aside from doing it for the fun of it, or for the sake of gaining the experience of belaying from above, the only advantage I can see to top-roping with the belay up above is if you're climbing a pitch where there is a lot of drag on the rope, and pulling one strand over the rocks is a lot easier than pulling two. EDIT: As Ben Crowell pointed out in the comments, top-roping a pitch that is longer than half the length of your rope would necessitate belaying from the top.

This would get really redundant really quick, and adds risk because it requires taking the climber off belay at the top of the climb. The climber would be required to clip into the anchor while you take them off belay and set up the new belay. That being said, I don't think that autolocks are intended to be used for lowering, so this may be the preferred method if you wish to belay using the device in autolocking mode.

As you mention, this would be fatiguing. As I mentioned in my comment on your question–in answer to your question about the munter hitch backup:

"If something goes wrong, it seems that the rope would start whipping through the setup, and the belayer would have to rapidly grab the brake strand of the Munter and pull up, which would require a lot of dexterity, speed, and presence of mind."

Their hand should never be off of the brake strand. In the set up in the BD video the rope would auto lock as soon as they let go of the release sling. They just say, "use a back up," they show a munter back up, but don't specify that's what you have to use, you can back up however you want. They're using a munter most likely because they're quick and easy to tie. An autoblock would take time to set up, but you could throw a munter into your belay loop in just a second, one handed, and lower straight away.

This is a brilliant set up, it's bomber and it's redundant, but maybe a little too redundant for top-roping a single pitch. You'd still have to take the time to redirect the belay end of the rope through the top shelf of the anchor and tie your autoblock.

I like Black Diamond's method better, but Petzl demonstrates giving slack to the second by using a carabiner instead of a sling. This would be quicker than setting up the sling, and it may give you some leverage on the device which would make it a bit easier than yanking on a sling, but would still prove to be fatiguing on long or multiple lowers: 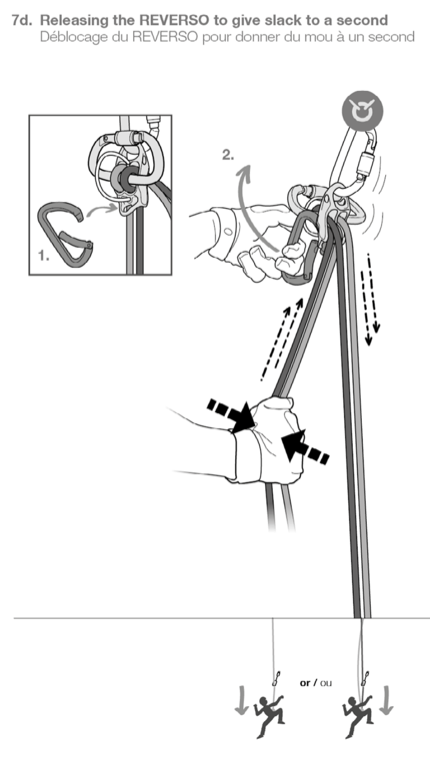 Method 3 is essentially just a more bomber way a of doing meathod 2. Either would be the preferred, safer methods of doing short lowers while multi pitching, but I don't think either are intended to be used for top roping a group of people. Or doing long lowers in general. It's my impression that lowering with an autolocking device is only supposed to facilitate giving the second some slack in the event they need it. I think it would be easier to top-rop belay from above the same as you would on the ground, except with the belayer closer to the anchor.

Alternately, you could belay them straight off the ACT without going through the anchor as is demonstrated in this video. 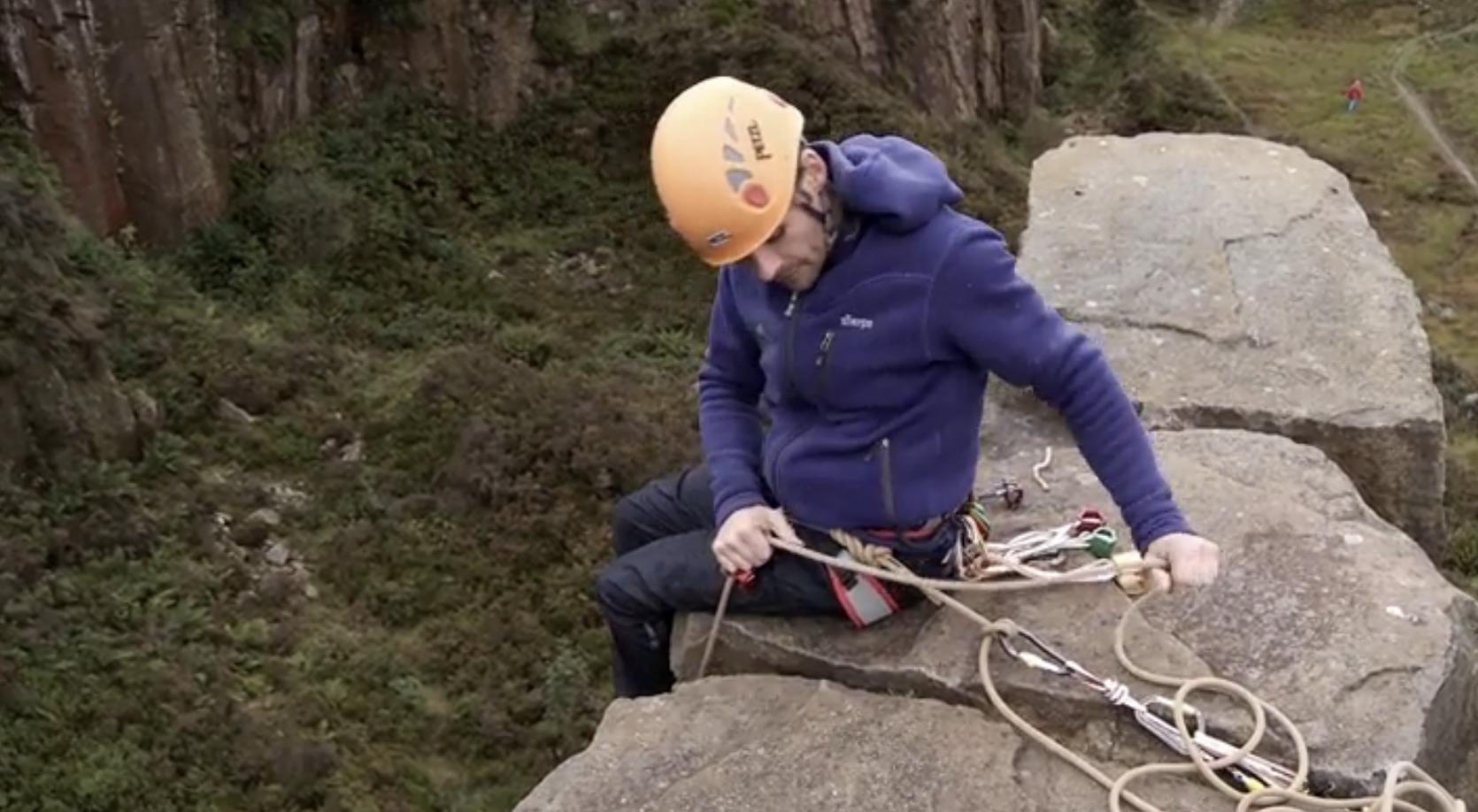 I suppose some other advantages to belaying top-ropers from above, other than the view, would be: if you didn't want to be distracted by the other people on the ground taking to you; you wanted a different/better view of the climber; you wanted better communication with the climber when they got up higher; or you simply didn't like one or more of the people on the ground and would prefer to avoid them.

This is not a complete answer but is just my attempt to analyze, after discussion with ShemSeger, the issue of what the Munter does for you as opposed to a Prusik. It seems that there are several different possible modes of failure:

Mode of failure A might be a real possibility in method 3, if the belayer's body weight inadvertently falls onto the release cord. As long as this failure doesn't occur simultaneously with taking the belayer's hand off the brake strand, the Munter should suffice. But note that the guy demonstrating method 3 specifically advocates it as a method that allows getting hands free.

In mode B, the climber starts to fall, and our only hope is that the Prusik holds. Again, this is a good reason to use a Prusik rather than a Munter.

In mode C, the question would be whether the thing causing the belayer to lose his grip on the brake strand is also something that would cause A simultaneously. If so, then you need a Prusik, not a Munter. In method 3, if the belayer gets incapacitated, his weight will probably slump onto the release cord, and you probably would get A and C simultaneously. This seems like a solid reason to use a Prusik rather than a Munter if you're using method 3.

22
Why does my belay device have two holes?
10
If an autoblock inteferes with a belay device will a fireman belay have any effect?
13
When should a belay device be replaced?
26
How should I vet belayers? What should I look for?
3
Using Gri Gri 2's Carabiner with Another Belay Device?
5
Using Gri Gri 2 as a Self Belaying Device
9
Big wall strategies for a three-member team
6
The dangers of simul-rappelling
2
Which way is which on the Wild Country variable controller belay device?