Guidelines for safe use of ATC Nano? [closed]

The photo below shows my new ATC Nano. Sweet! This is an innovative new belay device that is definitely going to be in my ultralight mountaineering setup from now on. After all, when you're bagging multiple 7000-meter peaks in a day, you don't want to be held back by a bunch of heavy technical gear that's really optimized for roadside cragging. 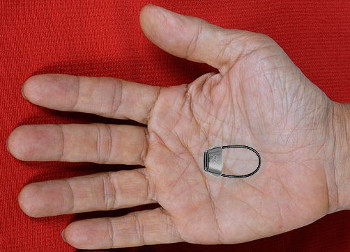 Unfortunately Black Diamond's documentation does not provide a lot of detailed information about how to use the thing properly. It came with one of those poster sheets with little diagrams without words, but every diagram has a skull and crossbones. Has anyone had a chance to rappel or give a lead belay with one of these so that they can share their practical experiences? I'm especially interested in any info on compatibility with various types of ropes and harnesses.

The good news is, it's compatible with just about every harness. However, you'll only be able to use it with 3mm static cord. It's best that you retire all of that heavy 6mm cord, it's slowing you down anyway.

A colleague of mine recently obtained one of these as well and they have plans to rappel with one sometime today and report back the results (though for some reason, he didn't tell anyone where he was going or what time he expects return).

Talking to a lead developer of it (I think he was the 5th to work on the project, no mention of what happened to his predecessors), he said that as it is not designed for use on single ropes, which is why they can get down to 3mm. They did think about a 5mm version for single rope, but a market survey indicated there would be no demand for it, as under about 9mm everyone uses double ropes.

As 3mm rope has about a 213.7489kg (+/- 87.3453) breaking strain, a safe working load for 3mm double is 87.6523kg, climbers, including all carried equipment and clothing, must not exceed this weight at any time in the climb or descent. Regular toilet stops for those close to this limit is suggested. BD are currently working on a UIAA rated 3mm rope to go with this, and hope to have it in the market by fall.

12
Are used climbing shoes safe?
14
Who places the anchors that rock climbers use?
10
What is the strength of an ATC belay device when used in a guide mode/multi-pitch setup?
7
What is the term for/manufacturer of belay devices with a clip that holds the ATC onto the carabiner?
7
Which option should you use for a multi-pitch climbing anchor after traverse?
11
Can you safely use retired ropes for belaying children?
4
How use a nylon cordelette as an adjustable tether for rock climbing?
6
Is it safe to use a nylon climbing runner/webbing that has a small fray?
2
Guide mode ATC with locker to belay loop