What is the species of this spider? Is it venomous?

I found this tonight on the external wall:

I have a feeling it is a young green fang spider, please correct me if I am wrong.

And the most important question: is it venomous?

That actually looks to be a Woodlouse Hunter (Dysdera crocata). They prey exclusively on woodlice. They also go by a few other names such as: woodlouse spider, sowbug hunter, sowbug killer, pillbug hunter, and slater spider. 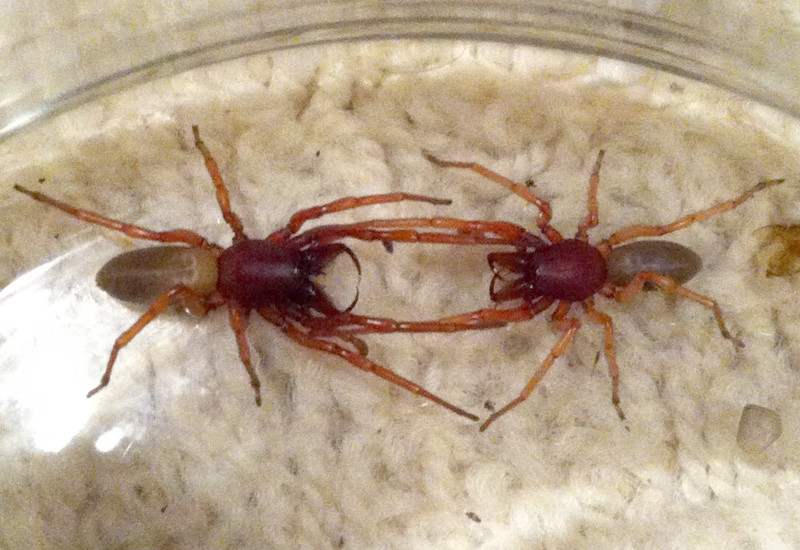 Dysdera crocata is a hunting spider found from New England to Georgia and west to California. It is also a commonly encountered spider in England, northern Europe, and Australia. The woodlouse hunter preys on pill bugs or sow bugs (order Isopoda) and derives its common name from the British common name for these crustaceans. D. crocata is known to feed on other arthropods as well. This is the only species of the family Dysderidae known to occur in Pennsylvania.

Important to your question of whether it is poisonous, also from the Pennsylvania State site:

D. crocata bites have been implicated in causing a localized, intensely itching erythema 4 to 5 millimeters in diameter. The bites apparently do not result in any systemic neurotoxicity or cytotoxicity.

... which means that if you mishandle one and get bitten, you'll likely only experience a swelling or reddening of the skin that itches something fierce. The bites, although painful, and while some of their venom may get injected into you, are not poisonous to humans. At worst, one might experience an allergic reaction from a bite, similar to that of a mild bee sting.

Not the answer you're looking for? Browse other questions tagged uk bugs spider bug-identification or ask your own question.

7
What is this black and white spider with a bowl/tube web in England?

7
What is this black and white spider with a bowl/tube web in England?
7
Identify what bit me by the mark it left (note: potentially graphic, but also beautiful, photos)
3
Big black bug in Southern Germany
6
Is this a dragonfly or a damselfly?
10
What will this bright green caterpillar with small turquoise spots turn into?
8
Is this tick or spider?
0
Eating huntsman spider
3
What specific species of grasshopper is this, and is it an invasive species that I should kill?
3
What Bug is this? Is it a Flea / Bedbug / Chigger / Mite?
4
What is the species of this green and orange spider?