What would be the pros and cons of one versus the other? Is a Prusik any less likely to hold if the rope has snow or ice on it? Is it an issue of speed on siege-style climbs, where you're ferrying loads? They seem to have in mind some kind of massive expedition, where you bring a special-purpose 100-meter static line just for this purpose.

As Freedom of the Hills also states:

– Freedom of the Hills

The key advantage in there being, "less tiring", yes you could save a couple hundred grams by not carrying ascenders and instead using some prusiks, but how much do those weight savings benefit you after you've ascended a rope a few times fighting with tight knots and all that extra friction?

Mechanical ascenders should be used in any situation where you plan on using a static rope as your main mode of ascent versus carrying dynamic rope as fall protection. If you're free climbing, then it's not necessary to carry ascenders, and prusiks will suffice if a situation arrises where you need to ascend the rope.

You very well could use a prusik in every situation you'd use an ascender, but ascenders were invented to replace prusiks, their only disadvantage is their superior weight, and if you're super picky you could maybe also complain about their superior size. But the time and effort you save on an ascent while using ascenders more than makes up for the effort you put into carrying the extra weight.

Your other suspicions are spot on, prusiks can be absolutely useless on iced-up static ropes, I've been in icy situations where my prusssic wouldn't bite the rope at all. Mechanical ascenders will never slip (unless it's completely worn out and doesn't have anymore teeth to bite with).

In aid climbing it's a no brainer, if you're laying siege to a big wall, you'd run the risk of wearing through your prusiks from the milage you put on them, also you're not too concerned about a tiny bit of extra weight because you're not climbing with all your gear, you're hauling most of it. Ascenders are what you use to haul your gear anyways, nobody is going to choose a prusik over an ascender for that job.

For mountaineering, fixed lines are used for high traffic routes on slippery slopes, typically if you're climbing a route with fixed lines, then your ascender is likely going to be the only piece of gear in your rack, the only other thing you'd be carrying would be an ax (unless you're the guy fixing the ropes). I'll use Everest as an example: Everest basically has a fixed rope from the bottom of the Lhotse face all the way up to the summit. Congestion is a problem as it is, I can only imagine how infuriating it would be for a climber queued in line behind a guy using a prussic, "Hold on just a moment while I tie my prusik onto the next rope..." Aside from the increased risk of frostbite from all the finger work, the extra time spent fiddling with your knots could put you at greater risk of getting caught on the mountain after dark, not to mention the fact that prusik knots will not grab the rope unless they are tight and weighted, if you slipped while following a fixed line with a prusik, there's no guarantee that the knot would catch you, at least not right away.

If being weight conscious is your only hang up for carrying ascenders, then I'd recommend getting couple of these: 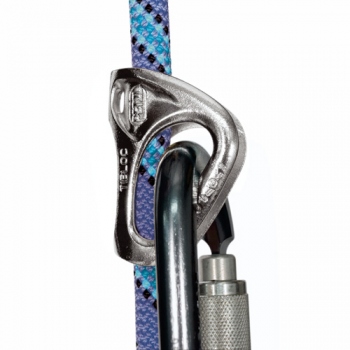 I never go anywhere without one, it's got all the biting power of an ascender at only 39g. I still recommend carrying prusiks, but they should be used mostly as backups.

One advantage that is noteworthy for prusiks, is that you can also descend a rope with prusiks as easily as you can ascend it. Ascenders are one-way, so you have to stick your fingers in the device to get them to release.

In ShemSegers answer fixed lines for ascending are properly addressed, there is nothing to add for me. As an alpine based mountaineer I come across lots of fixed lines whose primary purpose is security against falling and also aiding the ascent. So the line is not the primary means for ascending.

In this case, the described benefits of an ascender do not apply and simply using a sling instead of an extra device makes sense. The exeption of icy ropes still holds, in this case you need to use an ascender.

And a note about the Petzl Tibloc:

It is an extremely efficient tool, but also dangerous. Its teeth and edges due to the slim design wear a rope gradually out and improper or just careless use can immediately damage it. The sheath is affected, and I've never heard about rope failures, but a torn rope sheath is bad enough. So use it carefully as instructed.

For the case I described above, where you attach to a fixed line but do not use a hand to manage the tool all the time, do not use a tibloc. When sliding along and maybe touching rock it is quite probable that the teeth come in contact with the rope and damage it.

5
What is the minimum amount of gear that would allow one to ascend a climbing rope?

14
How do I tie a Prusik knot?
12
Adjustable mid-line knot?
10
What is the difference between accessory cord and prusik cord?
17
Double Mariner Mechanical Advantage
7
How to tie a Purcell prusik?
0
How to tie a Purcell Prusik from a single end?
1
Have a couple basic Q's on climbing-line (1 on safely descending/rappelling, another on using multiple lines and/or hardware to achieve “1+1=2”?)
1
Climbing-line “rope-thimbles”, unsure how to utilize these (got several 1/2" 'steel rope thimbles' with my climb-rope!)
28
Most practical knots for hitching a line to an object while keeping the bitter end as tight as possible, without sag?
7
Alternative to midshipman's / taut-line hitch for modern ropes