How effective are pen launcher bear bangers compared to bearspray?

So pen launcher bear bangers have apparently been around for quite a while, the training video for Truflare looks like something from out of the 90's, but they don't appear to be very popular, and I don't hear many people recommending them as an alternative to bear spray, despite the fact that they're much cheaper than bearspray.

The smaller flare cartridges below are classic red signal flares, the larger cartridges are the bear bangers, which have a delayed explosive charge that makes a really loud bang. 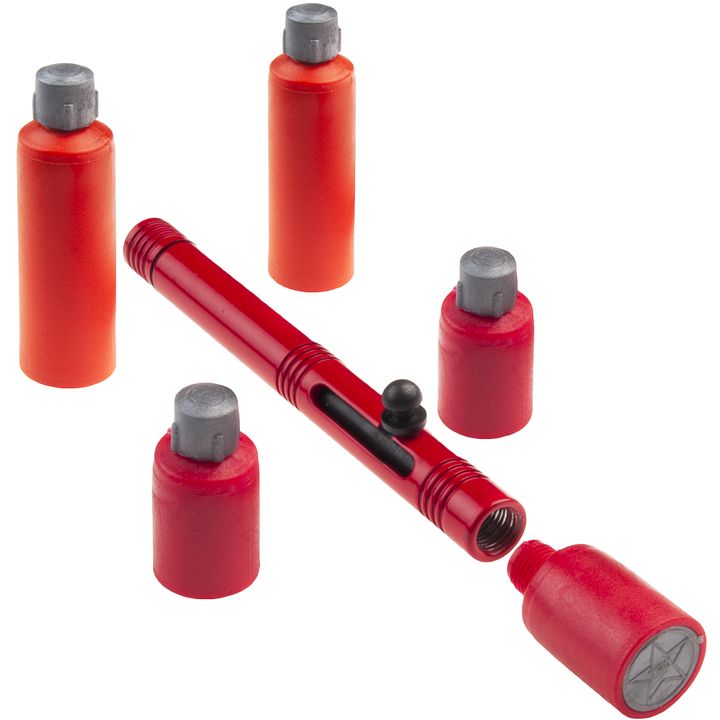 Aside from being a lot smaller and lighter (and cheaper), these seem to me like they could potentially be a lot more effective than bear spray, especially considering you could choose to aim the banger at the bear in desperate situations, and it would be effective from a greater range, and could be deployed against more than one bear at a time.

How effective are bear bangers compared to bear spray?

Bear bangers are intended to use when a bear is still a ways off, but is showing no signs of leaving, or is wandering towards you. The idea is to scare the bear off before he gets close enough that you need to be seriously worried. They generally shoot a few hundred feet. Looking through online forums, there's some suggestions that they are illegal in at least some National Parks, but I didn't find any specifics. But if you are planning on taking them with you, I'd recommend contacting whoever is in charge of the land you are hiking on, and asking if they are legal. Since they work with an explosive charge, there's also a fire risk (relatively low, but if it's a dry environment, the fire risk will still be high). They are louder than things like bells and shouting, but the principle is the same.

Bear spray is for close encounters. By the time the bear is close enough for the spray to be effective, it's obvious that the bear is behaving aggressively. According to http://www.centerforwildlifeinformation.org/BeBearAware/BearSpray/bearspray.html, bear spray should be used when the bear is 25 feet away or more, and should be sprayed for at least 6 seconds (enough to deter even a determined bear). Most of the sprays I read about claimed to shoot 30-35 feet. I'd guess that distance is in ideal conditions- warm, no wind. Bear spray is intended as a last resort, once its clear that noise is not making the bear back off.

In short, bear bangers are meant to work as a deterrent, much like bells or shouting. Bear spray is meant as a defense, for use once you are already in trouble, and the bear is clearly behaving aggressively and is close.

Edit: A note on bells, since their effectiveness is being questioned in the comments. A quick internet search shows that their effectiveness is low, and probably varies geographically and with species: Alaskan bears were observed ignoring it, Sierra bears were slightly less likely to attack a group with bells. Maybe because the Sierra bears are more likely to run into hikers wearing them, and hear them as a warning sign, while in Alaska, there's a lot fewer hikers, so it's just an unfamiliar, unimportant noise. But since the bells are cheap, and no one's reported evidence that they increase bear attacks, I'd still be willing to use one. If anyone finds evidence that they really work do work as a dinner bell though, I'll be very quick to change my mind.

The previous answer fits with the Alberta Parks advice regarding bears — they suggest carrying both noise makers and bear spray, with noise makers being used for bears still at distance. They include air-horns as options.

Bears' response to any stimulus is dependent on many variables - not the least of which is the species of bear and its relative experience with humans.

In Ontario I've treed a black bear by shining a flashlight into its eyes - but I wouldn't want to rely on that as a go-to deterrent.

In Northern Ontario cottage country, black bears prefer to avoid humans and will usually make themselves scarce at any human noises. So noise makers are likely to be effective.

But, of course, even with black bears, they're complex living creatures and their behaviour will change with experience. A sick or hungry bear can be unpredictable, as is one with cubs. And bears who have acclimatized to raiding human garbage dumps can become possessive and aggressive around the garbage site. Any of these cases could result in atypical behaviour.

In Alberta, the recent wild fires will have created significant ecological stress on all the wildlife, and so it wouldn't surprise me to see atypical behaviour from bears in the areas surrounding fire sites.

The "bang" should cause a would-be attacker to flee the area.

The risk of fire is exceedingly low. Explosives are commonly used in firefighting because they suck the oxygen out of the area around them. That removes a piece of the fire triangle... removing the fire.

Not the answer you're looking for? Browse other questions tagged safety bears bear-spray bear-bangers or ask your own question.

17
What are the critical dimensions to a safe bear-bag?
17
Is bear spray effective against other animals?
16
How effective are portable electric fences?
5
Is a mother bear more defensive during early summer compared to late summer and autumn?
24
How safe is sleeping in bear country?
11
How effective is wasp spray on bears?
4
Where can I buy bear banger launcher and ammunition and have them shipped to US?
10
How do you get bear spray off skin and or gear?