I've read that to take precautions in mountain lion country, people should hike and camp in groups.

Does that mean solo-backpacking is not advisable in mountain lion country (Rocky Mountains in my case)?

I can think of many reasons why solo-backpacking wouldn't be advisable, but cougars isn't one of them.

I'm not saying cougar attacks don't happen, last summer there was a incident in Waterton National Park close to home here, a cougar was menacing hikers along a popular trail, and even attacked a teenage girl that was part of a group.

Cougar attacks are very uncommon, and typically only occur when a cougar is sick, injured, or old and frail, and even then they usually target easy prey, like slow fat dogs, though they have been known to go after children that are a distance away from their parents. In the incident with the teenage girl, the ranger that shot the cat said that it was acting very unusual, and appeared to be disturbed. Pretty much all cat encounters have a similar story, but 99.9% of the time, aside from finding foot prints, it's highly unlikely that you will ever find a trace of one.

I grew up in a small mountain town in the Rockies, when I was 9 years old there were 3 adult cougars roaming around town preying on peoples pets. Before the cats were caught and relocated, rangers visited our school and taught us how to stay safe, avoid cougar attacks, and how to defend ourselves if we were ever attacked. Their advice was to hit the cougar in it's sensitive areas, namely, the butterfly under it's nose, and if it's a male, kick it in the balls. They also instructed us to cover our throats, as that is where all feliforms typically go for the kill. There are tonnes of cougars where I'm from (South of Banff National Park) but to be honest, I've never seen on in the wild in my entire life, and I grew up roaming their territory.

They are out there—my brother went out one day with a friends dad who has hounds for cougar hunting, and he said they were able to tree one in no more than 10 minutes—but cougars are very secretive, and will go out of their way to avoid human contact, so you don't have to worry about them, they're the last thing on my mind when I'm out in the woods.

The only time you would ever need to worry about a normal cougar, is if you were crashing around in the woods and stumbled upon a shallowly buried deer carcass. When cougars kill large game they will bury what they don't eat to save it for later, and they will get defensive if you approach their cache, so just leave it alone and get away from it.

For as much as encountering wildlife is a concern while backpacking solo, the greatest danger is silence, the odds of creeping up on a predator are a lot better when you're not having a conversation with anyone, so talk to yourself or sing while you walk, if a cougar hears you coming, it'll get off the trail long before you get near it. I guess if you were a really petite person you might have some reason to worry, I've heard stories of women getting jumped while jogging, but one thing that's going to deter a cougar from attacking you is your backpack, it makes you look bigger than you are, which is intimidating for large cats.

If you're worried about it, one of the best defenses you can have against a cougar attack is actually a taser. An inventor from California actually designed a taser specifically for defense against cougars, it's called the Armstar Bodyguard, and it's pretty dang sweet if you ask me: 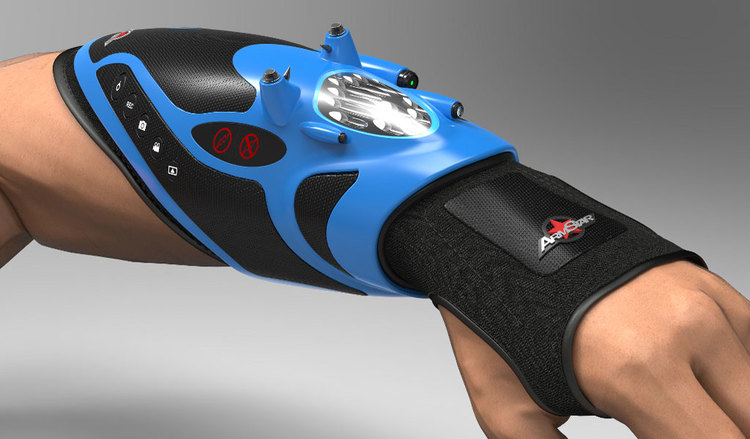 His idea quickly made it's way into the defense and security market, but he's still trying to get the sport model he originally envisioned (pictured above) out into the consumer market.

The precautions are exaggerated. These animals are extremely reclusive. Adult humans are outside their prey schema and will be avoided except in extremely unusual circumstances.

Exaggerating the threat to the animal through intense eye contact, loud shouting, and any other action to appear larger and more menacing, may make the animal retreat. Fighting back with sticks and rocks, or even bare hands, is often effective in persuading an attacking cougar to disengage.

Personally, I'd still avoid solo backpacking not because of wild animals but because there won't be anyone to help (or get help) in case of any accident.

I often go solo backpacking in mountain lion country. I've had an encounter with one before. It was night and it was lurking around about 50 feet from my campsite. I noticed it after turning on my headlamp and looking around. It must have been curious. I scared it off by growling and yelling at it. Earlier that evening I think I scared it, as I startled some kind of large non-deer animal near the trail. It may have followed me to my camp.

They like to hunt around zone boundaries, such as where a meadow meets a forest or where they can overlook a stream zone.

They are somewhat rare, and very reclusive and afraid of man. Chances are you are safe alone. DO NOT RUN from them. Stand your ground and yell.

Not the answer you're looking for? Browse other questions tagged backpacking cougars solo-backpacking or ask your own question.

10
What permits and reservations do I need for the Adirondacks?
15
How can I test out my equipment before a backpacking trip?
15
How do I protect my book(s) while backpacking?
31
Backpacking Through Rain
6
What are wildlife hazards/precautions near the treeline at 8200ft on Hearst Lake in Montana?
4
Camping on top of a mountain
15
Is there a difference between a hiking trail and a backpacking trail, including if it's the same piece of land?
2
no weapons Fighting large cat with bare hands
3
Ultra-light camping setup for solo-backping in the Uintas