Are static dyneema/spectra ropes suited for use on glaciers?

While Dyneema is in use for cordelettes for quite some time manufacturers started bringing long ropes made of dyneema on the market. The benefits are obvious: Less weight, less volume and no water absorption. The big difference: The rope is static so it does not stretch and take up energy in case of a fall. This makes it unsuitable for climbing. So I am thinking glacier tours and ski touring.

How does the dyneema rope being static influence the ability to stop a fall into a crevasse?

If as a consequence the same procedure as for dynamic ropes cannot be applied: Is there a method so that static ropes are save to use in this scenario?

Are there any other factors to consider when using dyneema ropes on glaciers?

Clarification on the material:
Dyneema is a Ultra-high-molecular-weight polyethylene (UHMWPE, UHMW), also known as high-modulus polyethylene (HMPE), or high-performance polyethylene (HPPE). Spectra is the same material. From my web search it looks like dyneema is more commonly used in Europe and spectra in the US.

I would use a dyneema rope as a lightweight hauling rope, rap line, or rescue rope, but I would never use any kind of static rope to catch a fall, this would include a fall into a crevasse, or a slip on a slope.

With static ropes there is nearly zero energy absorption, I imagine this is even more true with dyneema. In the event of a fall during glacier travel, the immediate response for the rest of the team is to fall onto their ice axes in self arrest (team arrest). 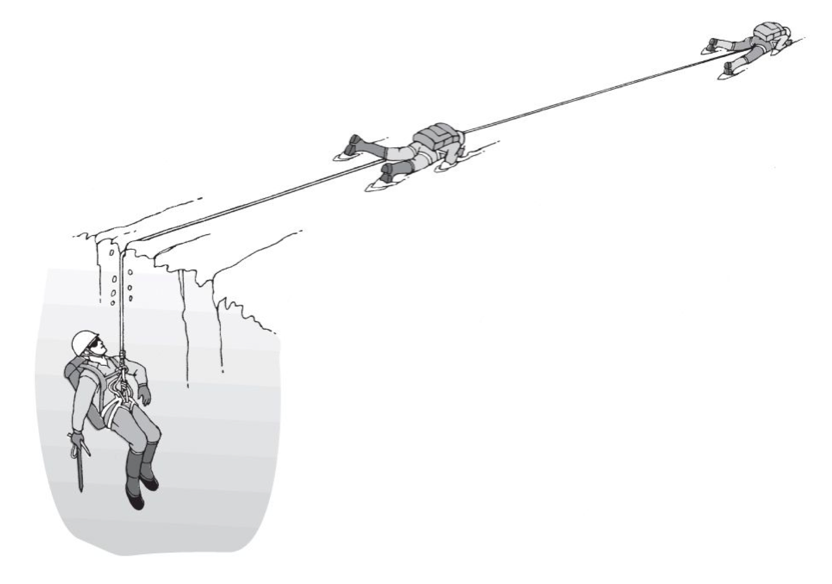 The team's job is to catch and hold the fall. A static rope has the potential to pull everyone else into the crevasse with the leader, because the initial impact of the fall would be extremely jarring for not only the victim when he hits the end of his rope, but for the rest of the team as well, it could be enough for them to lose grip of their axes which would take them into the crevasse as well. The dyneema's slick texture and thinner diameter would only make things worse because there would be little friction over the edge of the crevasse to aid the team in catching and holding the fall. Falls into crevasses are usually a surprise for everyone, they most commonly happen when the leader is crossing a hidden snow bridge that suddenly gives way underfoot, it is never appropriate to use a static rope for fall protection.

A Dyneema rope would be in the same category as a 6mm Aramid rope. They are meant to be an ultralight alternative to carrying a larger nylon static rope. They would work for Glacier travel and ski touring, but only as an emergency rescue rope, not to tie your team together.

The short answer by testing is yes, it is perfectly suited in those cases. Peter Popall and the Petzl team tested static and dynamic ropes for crevasse falls and held more falls with the static ones. In a ski touring guide course I attended this year one mountaineering guide brought such a rope with him. He uses it all the time and already had one real case of a crevasse fall. But lets look at what happens in case of a crevasse fall:

In the following the scenario is a two man team on a snow covered glacier (icy is not relevant, as you cannot stop a fall on ice and you see the crevasse anyway). The process can be divided into two phases: The buildup of the tension and the stopping of the fall.
The buildup with a dynamic rope is delayed while for the static rope it is abrupt. This means it is much more likely to hold the fall standing with a dynamic rope. But this is only possible when being ready for the fall which in real life is normally not the case. So normally this phase ends by falling off your feet and being pulled towards the crevasse. The abrupt jerk by the static rope is described as unpleasant but bearable. By personal experience I can say, that those jerks are unpleasant for dynamic ropes too.
When breaking to stop the fall the rope being static has no more negative effects. Contrary Popall found the dynamic rope to show a jojo-effect: When cutting into the crevasse edge the rope can get stuck and start to stretch and thus accumulate energy, which then gets released again. With static ropes no energy can build up so the force is constant. Thus stopping the fall should in theory be even easier with a static rope. Whether the jojo-effect is really an issue in reality, I cannot judge, atleast I never experienced it so far.

The article by Peter Popall can be found under the following link, it is in german and may be behind a paywall:
http://www.bergundsteigen.at/file.php/archiv/2014/3/60-65%28statisches%20dyneema%20vs%20dynamisches%20seil%29.pdf

Not the answer you're looking for? Browse other questions tagged gear mountaineering ropes glaciers or ask your own question.

13
Why are there ropes on fingerboards?
6
Major fall, same for static and dynamic?
16
When to use a static rope?
9
Is dyneema rope without a sheath safe for climbing?
9
What ropes could I use to suspend a hammock?
11
Can you safely use retired ropes for belaying children?
7
What kind of ropes are used for very long sport routes (like Chilam Balam)?
19
How fast does a climbing rope recover its dynamic properties after a fall?
1
What types of ropes are there for multi-purpose camping that are strong?
5
Are kernmantle ropes more susceptible to damage than 3 ply twist or solid braid?