What animal might uproot and relocate a newly-transplanted sedum?

My husband transplanted a sedum to an area under our bird feeders about ten feet away. The plant is 6 inches wide, 14 inches long, and the hole was approximately 10 inches deep. After removing it, he filled in the original hole. The following morning, the entire plant had been dug up and returned to the spot from whence it came! It was just resting there on top of the dirt, with no bite marks or other visible damage.

It's a suburban back yard in Massachusetts, in the northeast region of the United States, growing zone 6a. We have a number of regular visitors. I've eliminated chipmunks and rabbits for obvious reasons, so from what we've seen, the possible culprits include opossums, skunks and raccoons. According to what I've read, opossums don't dig. Skunks and raccoons do, especially when the soil is newly turned, because insects and other food sources are more easily accessible, so one of them may have uprooted the plant. We have no idea, however, what would have relocated it!

Unfortunately, my husband returned it to the same new hole under the feeders without taking any pictures, so I'm posting one of just the plant, and one including its surrounding habitat. The incident took place two weeks ago, and the plant has not been disturbed again. 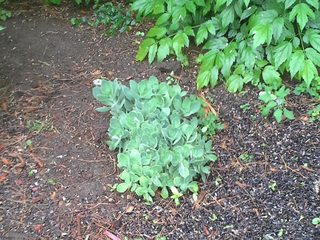 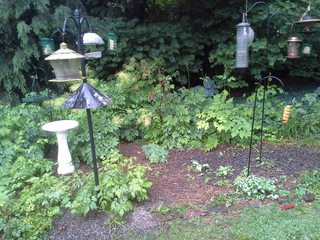 I think this was most likely at least a two-creature job.

That same sedum has been dug up, broken into pieces and strewn around my yard a number of times. (Pictures of some of the pieces were used in my answer to a question at Gardening and Landscaping, in case you want to see them.)

After posting this question, we put up a motion light. The largest animals we've seen have been skunks, raccoons, and opossums. In fact, just a few weeks ago, we saw a large mother opossum with three young ones. They ate leftover bird food, then used their noses to root around under leaves and yard debris, most likely in search of living things, like insects.

I just found footprints in the two places where the sedum has been planted, and some other parts of the yard. I didn't get a clear enough picture to post here, but using an online site for comparison, I was able to closely identify raccoons and opossums, while ruling out badgers, groundhogs, and bears.

Opossums have noses which are strong enough to loosen, push up and tip plants over. Raccoons use their front feet to dig things up and tear them apart. They also carry their young in their mouth, so they would have the strength and ability to move even the more weighty sedum sections.

Therefore, my closest guess is that an opossum started the job, and a raccoon finished it.

I still have no idea why the plant would have been moved in and out of the exact same spot, so for that part I'll just embrace the mystery. 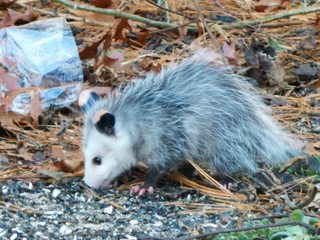 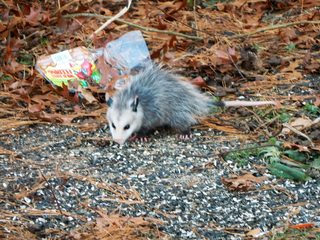 Not the answer you're looking for? Browse other questions tagged united-states animal-behaviour plants or ask your own question.

11
Can you tell if a plant is edible by watching what animals eat it?
3
What might cause a massive blood stream from a lethally hit moose's mouth?
28
What animal could strip all the bark off the lower 7 feet of this tree?
9
Do squirrels have front and full peripheral vision?
4
What animal would chew up trees in West Georgia?
6
What UK carnivores might I find up mountains?
4
Did a bear knock all my bird feeders down?
5
Animal Identification from “leavings”
4
What aquatic animal laid these eggs?
3
When, and how, is it safe to relocate a burrow of chipmunks without harming the young?