What is this plant? Is it Poison Oak?

Yesterday, I was hiking on the Washington side of the Columbia River Gorge to help a friend locate an inherited parcel of land. We think we found it, based on a variety of documents and a few handy landmarks. When we were about to head off-trail to get a better view, she halted me and pointed to some small shrubs blocking our path. She claimed it was Poison Oak & refused to take another step.

What are the pictured plants? 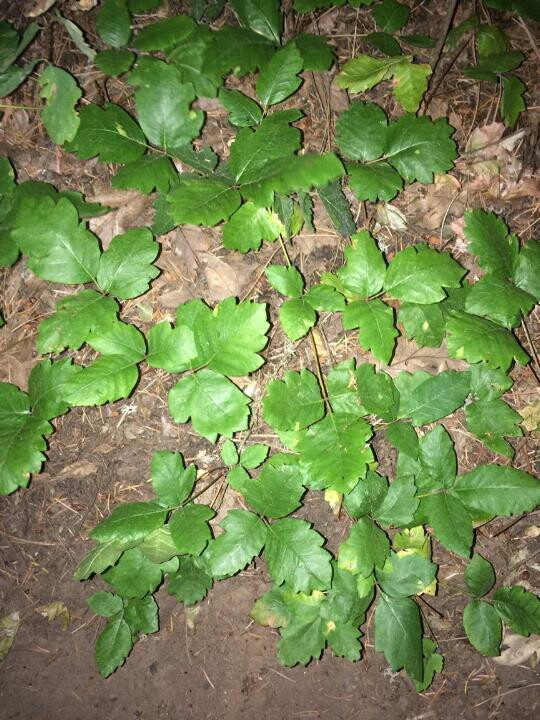 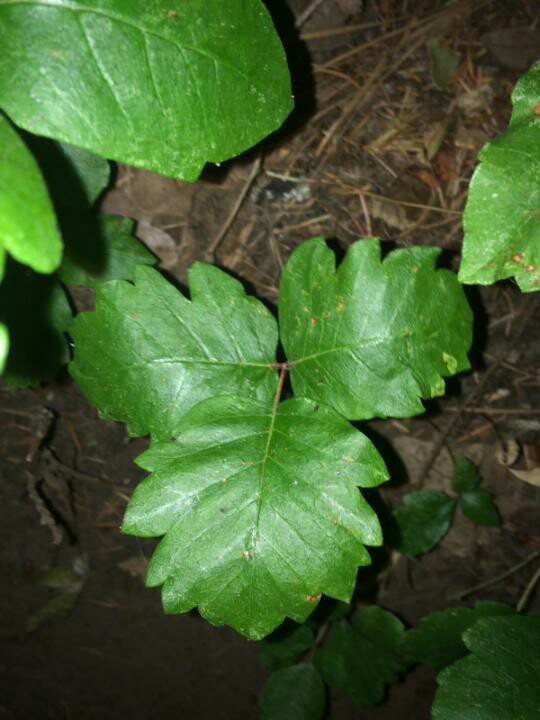 I have no knowledge of the plant, but I did find some interesting information, which I hope will help you.

Poison oak, also known as Western poison oak (Toxicodendron diversilobum), is native to western North America with a distribution extending from British Columbia to the Baja California peninsula. In Washington and Oregon, poison oak is found mainly in the western regions of the states. In California it is widespread and grows in a wide range of habitats from sea level to the 5,000-foot elevation and in areas including open woodland, grassy hillsides, coniferous forests, and open chaparral. source

Presenting most frequently as either a vine or bush, it can also be tree-like with a thick stem, growing to 9 or 10 feet tall. As with others in the family, the most tell-tale sign is leaves grouped together in threes, called leaflets, the middle being the longest. They're green throughout the summer, turning red in the fall. The leaves are often, but not always, shaped like those of a regular oak tree, although it's actually a member of the cashew, not the oak, family. Also, it's technically allergenic, not poisonous, which makes it less dangerous, though not necessarily less uncomfortable, than some other plants!

The Sure-Fire Poison Oak and Poison Ivy Identification System is an extremely comprehensive 14-page booklet, with detailed information about the various types of poisonous plants; instructions for discerning their characteristics; drawings; and location maps.

Unfortunately, your pictures appear to match many of the criteria:

From the same source:

What you will never see on Poison Ivy or Poison Oak plants:

• Flowers growing from the end of a stem.

• Flowers any color other than cream or white.

• Fruit larger than a pea.

• Leaf stalks directly across from each other on the stem.

For more information and pictures:

I grew up in the Ozarks where there is Poison Ivy, Poison Oak and Poison Sumac. All are plenty of fun.

Not the answer you're looking for? Browse other questions tagged plants plant-identification poison-oak or ask your own question.

16
How should you wash clothes after exposure to poison oak/ivy/sumac?
8
What is the most effective method to clean skin exposed to poison oak?
18
Plant identification methods
10
What is this really tall grass-like plant?
10
What is this plant in England with large veined leaves and multi-part buds?
2
What is this plant with fluffy white flowers in the Canadian Rockies?
3
Is it possible get a rash from poison ivy but not poison oak?
6
Plant Identification: Is this lemon balm?
26
This long, skinny plant caused red bumps on my son's knee within minutes. Is it poisonous?