What is an equalette anchor?

When setting up belay there are many ways to connect the anchors. One way is called equalette and is supposed to adapt to a certain extent to the direction of pull.

How is such an equalette constructed? If there is not one definite way: What are different ways of setting up an equalette and how do they differ?

There is a question "When to set up a Cordelette and an Equalette?" where an partial image is supplied and a commentary debates whether this even is an equalette, so the topic seems to be debatable.

The equalette is the evolution and combination of the cordalette and sliding-x. It makes up for the short comings of each system, while incorporating their strengths to produce a more SRENE anchor.

One of the criticisms of the cordalette is after you've tied the master knot, you have potentially poor equalization if you deviate from your set direction of pull. The sliding-x anchor offers auto-equalization, but at the expense of adding friction and elongation to your anchor system.

The below image shows an example of an equalette, it looks complicated at fist glance, but the strength of an equalette is that you can tie it with any combination of clove hitches and other knots to meet your needs given the availability of anchors on the rock, it's not necessarily meant to be tied the exact same way every time. For example, if you have four or more placements, then you can tie into them all using clove hitches vs using a figure eight on a bight on the third anchor in the image below. You adapt how you tie your equalette to your given situation. 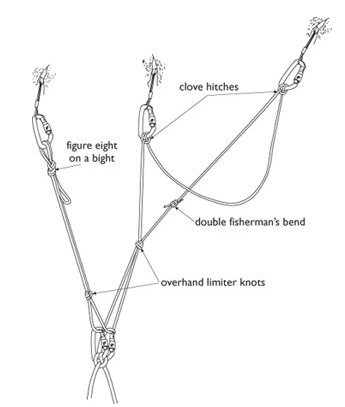 Image Credit: Freedom of the Hills

The equalette is tied from 6m (20ft) of 7mm or smaller diametre accessory cord tied with a double or triple fishermans knot depending on the material of the cord.

To set it up, first tie of a 25cm (10") section with overhand limiter knots near the middle of the equalette, this is going to be your self-equalizing clip in point. Where exactly you tie it may be offset from centre depending on where your anchors are relative to the direction of pull, but wherever you tie it, you're going to be left with two larger loops on either side. This is where you're left to your own creativity, using any combination of knots, tie the loops to your anchors using one or more elements per side.

Using two locking carabiners is preferable for clipping your rope to the equalette, clipping one biner into each of the loops between the limiter knots. You can still use just one carabiner, as long as you put a half twist in one of the loops to make a sliding-x, but this reintroduces friction into the system.

An equalette may seem complicated at first, but it addresses the shortcomings of other systems, and needn't take any more time to set up than other systems. 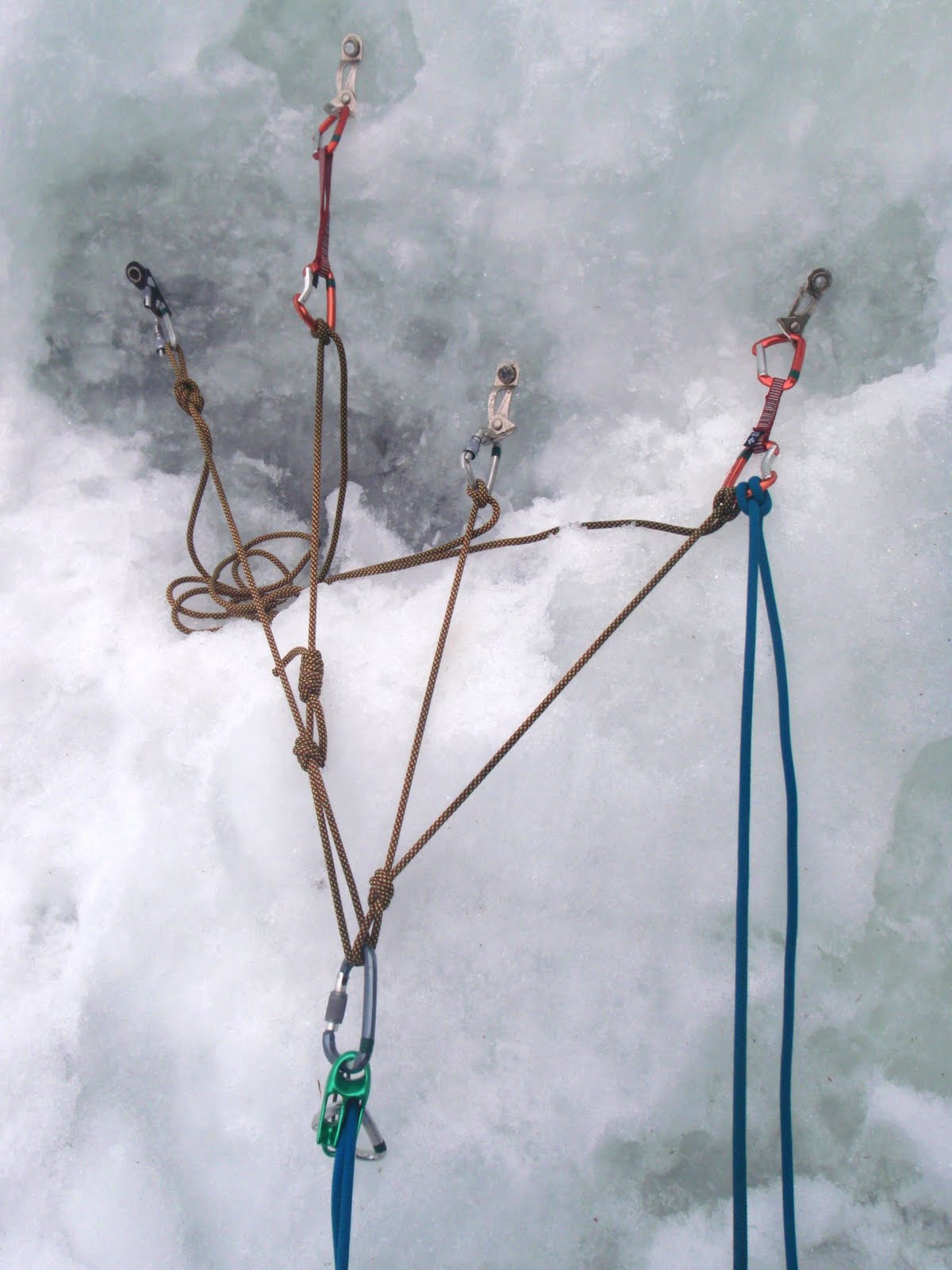 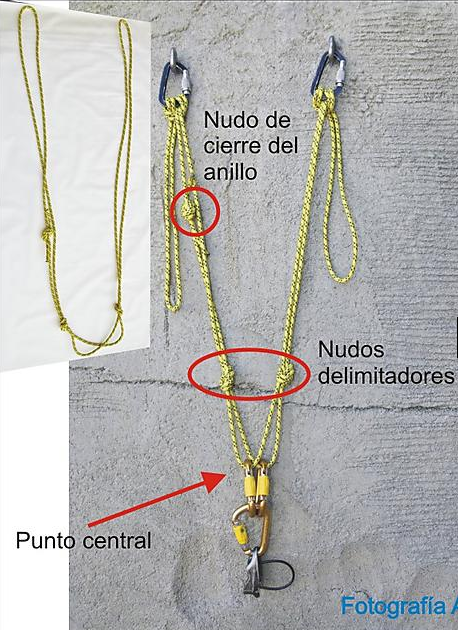 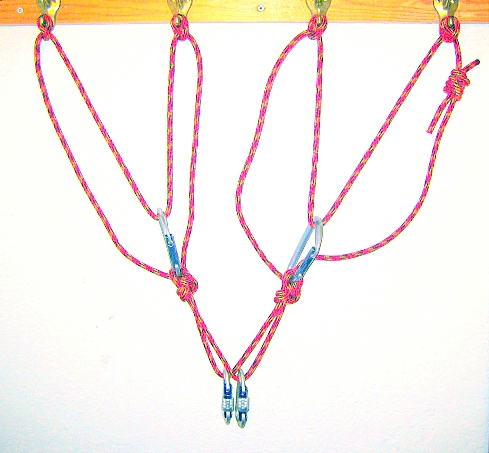 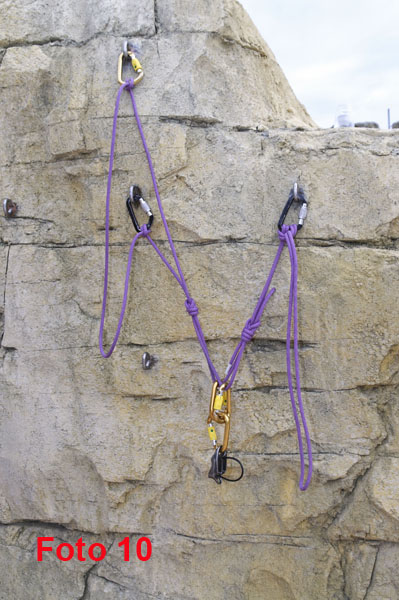 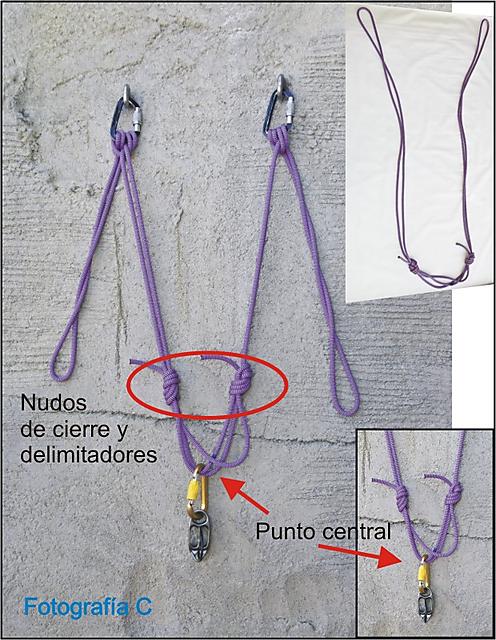 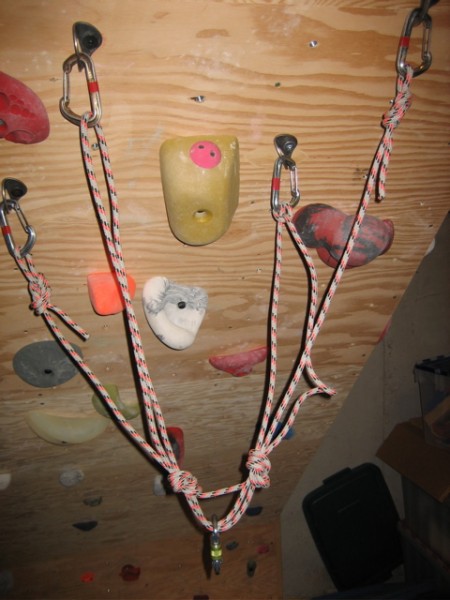 11
Top Rope Anchors - is a figure-8 on a bight stronger or just easier to untie than an overhand knot?
12
How should I choose between setting up a Cordelette or an Equalette climbing anchor?
6
Top rope installation on an anchor

11
Anchor without cordelette?
12
How should I choose between setting up a Cordelette or an Equalette climbing anchor?
13
Avoiding building a belay anchor too low down
11
Learning Anchors - How is single cordelette loop anchor redundant?
11
Is this anchor set up right?
16
What is a "spit anchor"?
9
Extending a two bolt anchor with one sling?
12
What to do when one point in a climbing anchor breaks?
5
Can an overhand loop be used to shorten nylon webbing as a personal anchor?
6
Top rope installation on an anchor