Encountering a bear in water?

I found myself in a situation the other day that I've never been in before. I was paddling along in my canoe with my wife and kids, when suddenly a young black bear came scrambling down the slope, jumped in the water, and started swimming towards the other side of the lake off our bow. 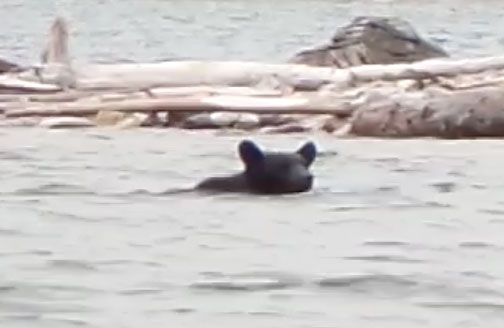 We weren't in any danger. The bear was swimming straight for the other shore with an obvious sort of determination. It got out on the other side, shook off, and started to graze. I of course wanted to hang around, take some video with my phone, and let my kids enjoy the scene, but my wife was on the brink of a freak out and wanted to get as far away as possible. 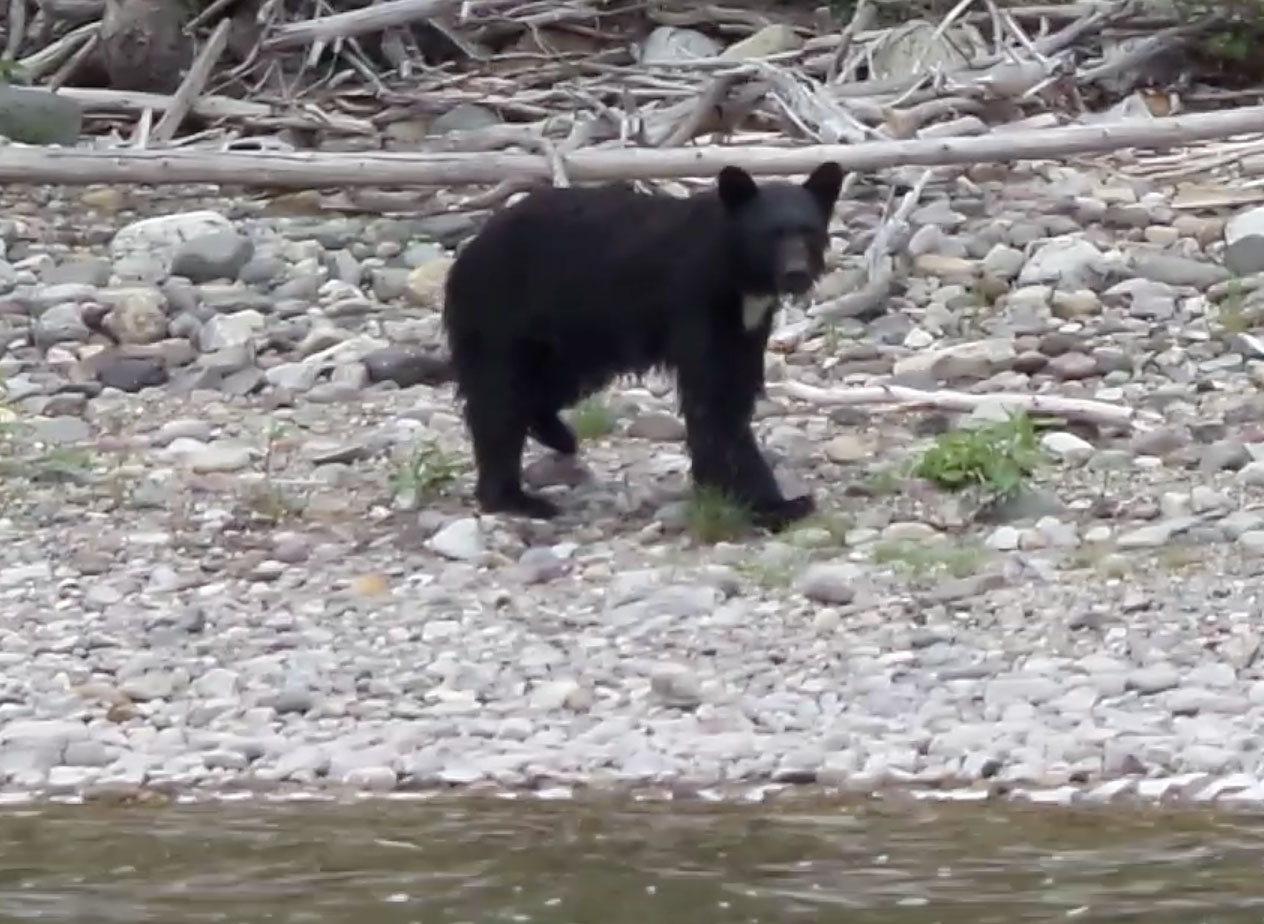 While reassuring her that we were in no danger, that we were much faster than the bear in the water, and could effortlessly paddle away if the bear decided to come swimming after us, it occurred to me that I have never received any instruction about how to handle water-launched bear attacks (as extremely rare of an occurrence it may be).

What can you do to repel an attack from a bear while in water?

Bears don't generally like people, and the ones who do are usually going to be more interested in dumpsters and campgrounds than a random boat on the river. The likelihood of ever getting into a situation where you have to fend off a bear attack on the water is absurdly small. Bears are usually either crossing water to get somewhere else and want nothing to do with you, or else they're fishing... and want nothing to do with you. The majority of conflicts between humans and bears occur when the bear is hungry and accustomed to human food. If the bear is fishing, it's clearly not looking for human food, and if it's not fishing, it's probably not hanging out in the water.

That being said, if I were in such a situation, I would do the following:

I'll share what thoughts I had in the moment, and after, while reflecting on the matter:

My first thought I've already mentioned in the question, being that the bear was slow and we were fast in our 17.5ft Kevlar Clipper Tripper, so we could have speedily paddled away no problem. But what if we were in a situation where a swift getaway wasn't an option, and the bear was able to swim out to our canoe? One paw on the gunnels is all it'd need to capsize us, and I'm pretty confident an aqua-battle against claws and teeth would be pretty one-sided.

We didn't have any bear-spray on us (bears are the last thing on my mind in open water), so my next thought was I could scare the bear with a beaver tail smack of my paddle on the water, perhaps the gun-shot crack would startle him away. The next thought I had was to use my paddle to simply keep the bear at a distance from the canoe, push on it in an attempt to either push it away, push us away from it, or try to submerge it under the water. Perhaps a drink and the sensation of drowning would scare it back to shore (assuming it doesn't grab the paddle out of your hands first). But then I thought, scaring it might just as likely cause it to startle and try to escape the water by desperately climbing out into the canoe. I wonder too if bear spray would cause this same reaction, if not drown the bear as it struggled with a nose full of hot pepper gasping for air?

My last thought was to simply beat the bear in the head with the paddle hoping it would concede and swim away.

This is all I could come up with on my own, so if I had to answer my own question all that I could recommend would be:

Assuming your child can either swim or has a lifevest on, jump into water, turn canoe upside down and hide under it. I thought about this while canoeing with my daughter and her daddy. I told him about my plan if we encounter a bear and the bear decides lunge at us. ;) have a nice day!

Just in case anyone is reading this thinking about it, obviously later than this post was created though. I have been in this situation. I grew up in the Adirondack Mountains and have shot at bears with bb guns and paintball guns just to get away from the trash and other things. I've encountered bears twice while out fishing and they left me right alone. The first time was a bit crazy though lol. Second time not as much. These days they know not to tangle with folks. But spray and definitely a gun if you can have one..( hopefully your not in a super liberal state where everyone is all scared of firearms) can usually get them away from you. Just shoot near it unless you have no other choice. Family first though. Humans are more important. The first time I stayed still just about and the second time I just kind of slowly paddled and kept fishing. Both times I felt pretty safe. And they acted the same. Only freak out if you have too. Over reacting can cause more problems. For you and the bear.

Not the answer you're looking for? Browse other questions tagged survival bears canoes or ask your own question.

20
Bear bags vs Bear canisters: which is better?
35
If I cross paths with a bear, what should I do?
22
Can I shoot a bear in self-defense?
10
Are there significant behaviour differences among bear species to adopt different safety rules?
24
How safe is sleeping in bear country?
22
What do I do if a black bear is right outside my tent?
2
Black Bear Deterrents
5
Do Glacier National Park (USA) backcountry camps have bear poles / bear canisters?
4
Is a bear canister needed for day hikes?