I have climbed for a long time, but I want to switch to cordelette anchors for speed on multipitch. My main concern is in redundancy with the cordelette.

I mentally check the anchor for any problems, and I usually use two slings in this type of equalized configuration + added knots to prevent shockloading if a bolt fails (knots not shown): 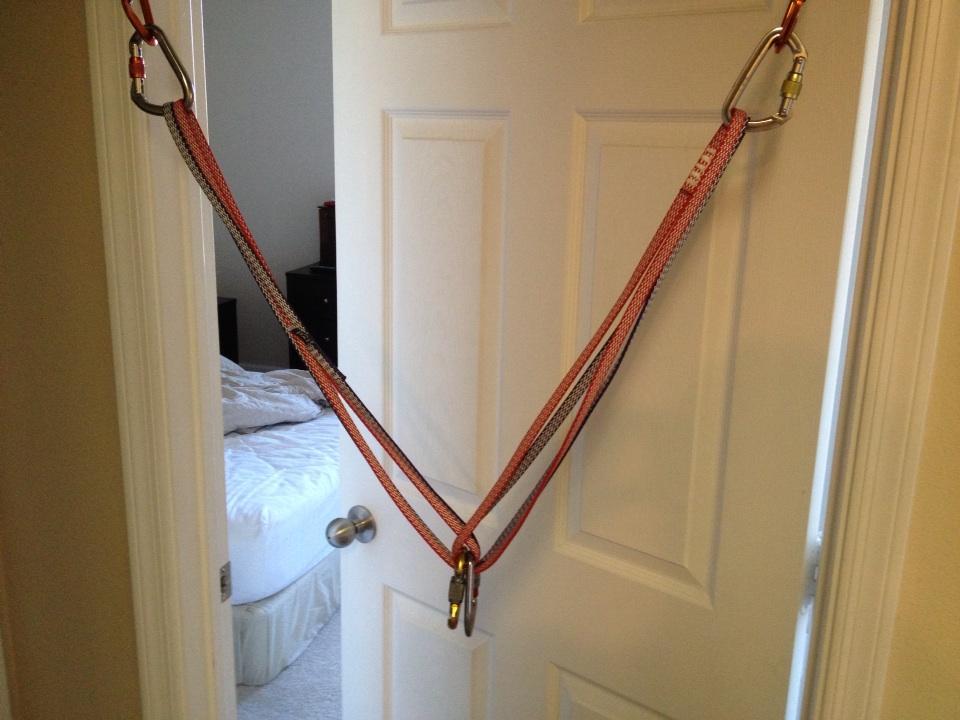 Getting into multipitch however, it seems like cordelette is the way to go for setting up quick 3 point anchors. However, the cordelette doesn't seem redundant to me. If the cord breaks above the knot, it's certainly safe, but most breaks happen at the knot. If this happens, the whole thing could potentially unravel!! 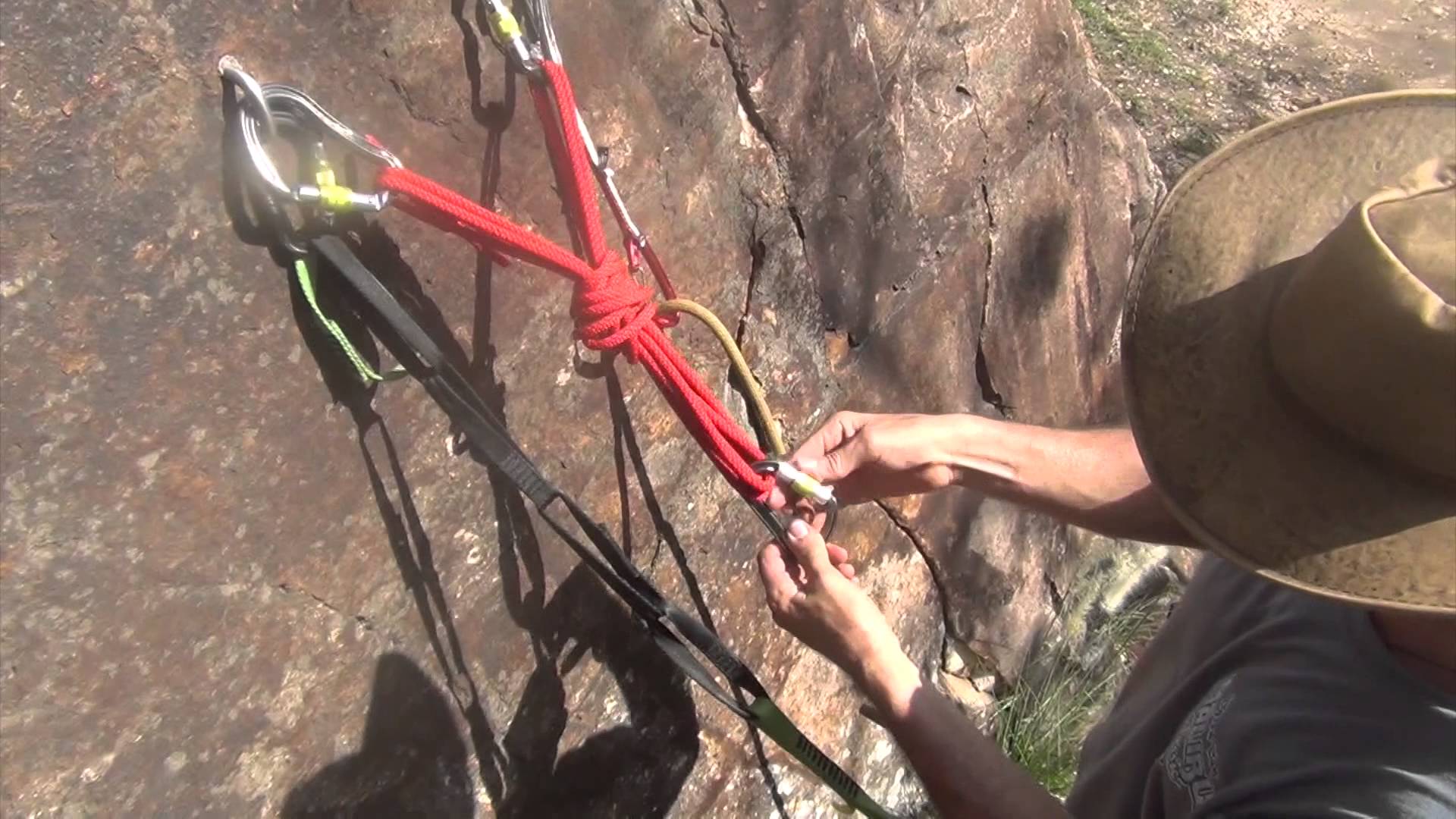 - here's a picture of a cordelette doubled up. Even if one strand breaks and unravels in the knot, there is an entirely closed loop of cordelette still in the system.

The answer to the question in your title is simple: This is not redundant. Is this a problem?

It is important to realize the following about redundancy in climbing:

Mostly there is no complete redundancy in climbing. You climb with one rope, you use one sling for self arrest, ... In rescue operations we have the order to be always redundantly secured and you can believe, the resulting battle of material is exorbitant. Redundancy always comes at the cost of more complexity and weight, so we only want to go redundant if there is no alternative way to achieve the same (reduced) amount of risk.
The conclusion is that redundancy is needed where failure is uncertain.

This is why we back up bolts and pro. They were not tested (in place), so they may fail without you being able to foresee it. In slings, cordelettes, ropes, harnesses, ... this is not the case. These were tested according to norms, so you can determine whether they are strong enough or not. The maximal force a rope can exert is 10kN (again due to testing according to norms), so the maximal force on any point is twice as high (rope redirection): 20kN. Look at slings and quickdraws: They have strength ratings of 22kN so no chance they will brake. Thats why you don't use redundancy on them. Of course this is only true if everything is in good condition and correctly handled, but thats commonplace.

The maximal load onto a cordelette at a belay is 20kN too, so there is no uncertainty. You need to choose the cordelette accordingly and you are save. So the question is whether it is strong enough or not, and not should I use redundancy. As a matter of fact most belays are not built for the worst case: If you belay the leader on your harness, the rope is clipped into the belay and he falls before reaching the first protection there is the chance of such a 20kN load onto the anchor. Very often just one sling with a knot (-50%) is used to connect the bolts and provide a central tie in point, so it can only take 11kN (half the sling rating). This can be mitigated by belaying directly on the belay stating or justified by "being attentive", meaning stopping the fall dynamically and thus reducing the actual load (which will anyway never really reach the 20kN). But technically, that situation is not save, but when is climbing save? Never! We just do our best to reduce risk.

On cordelettes: A cordelette used to set up a 3 point anchor will have three loops of rope above the knot (one per piece) and three loops below. The knot itself will have 6 strands of rope running through it. (This eats up almost 2 meters of cordelette length alone.)

If you cut a single strand the location of the cut hardly matters; you will still have two independent loops both above and below the knot. 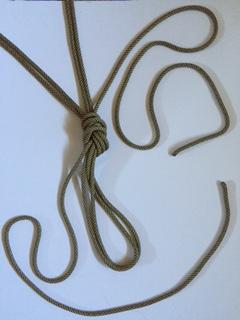 (If your concern is that the entire loop of cordelette is no longer a closed loop, then why would you consider a cordelette to be a closed loop at all? After all, whichever knot you used to tie it into a loop could similarly "unravel". Fortunately we are not using frictionless materials, and so knots actually hold.)

On redundancy: While redundancy is often talked about, in actual use it's mostly applicable in cases where the security of a piece of equipment is uncertain. Thus it is common to double up on bolts or triple up on cams, whereas a good-sized tree or refrigerator sized block of stone can be considered sufficient. Similarly, top-rope anchors are usually unmonitored, so you use extra carabiners at the powerpoint to ensure the rope doesn't unclip itself.

In multipitch anchors where someone is at the anchor to keep an eye on things, using a single sling to connect a pair of bolts and a single locking carabiner as the powerpoint is relatively common.

Your belay device is attached to a single belay loop, your climbing rope (at least in the US) is often single, your personal anchor (or sling, or bit of rope) is similarly single, and I would argue that your harness tie-in points are better described as "complementary" than redundant.

What makes the absolute strength ratings of equipment less important is the rope itself; its elasticity lessens the force on the rest of the equipment. A fall hard enough to break a sling or cordelette is going to do very bad things to your spine and internal organs. (Even a factor two fall on climbing rope should not have enough force to do this.) Thus, if a cord breaks in actual climbing, it's probably because a large rock fell on it or it was cut by a sharp edge.

The focal knot itself provides redundancy. According to the Ashley Book of Knots, when a cord breaks, it usually does so outside of the knot and not inside. Therefore, if the cord breaks below the knot, like you were concerned, the knot will not usually be affected or unravel.

SARRR has an excellent video demonstration of this behavior with an equalized cordelette anchor.

After the initial failure, the knot is still intact and maintains redundancy.

Similar results for different knots here and here (pictures posted here because the articles are long): 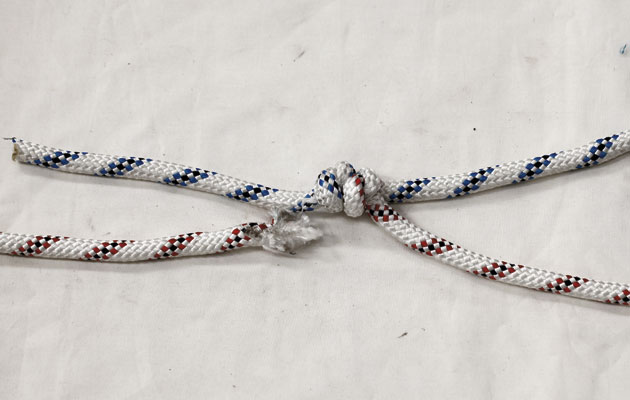 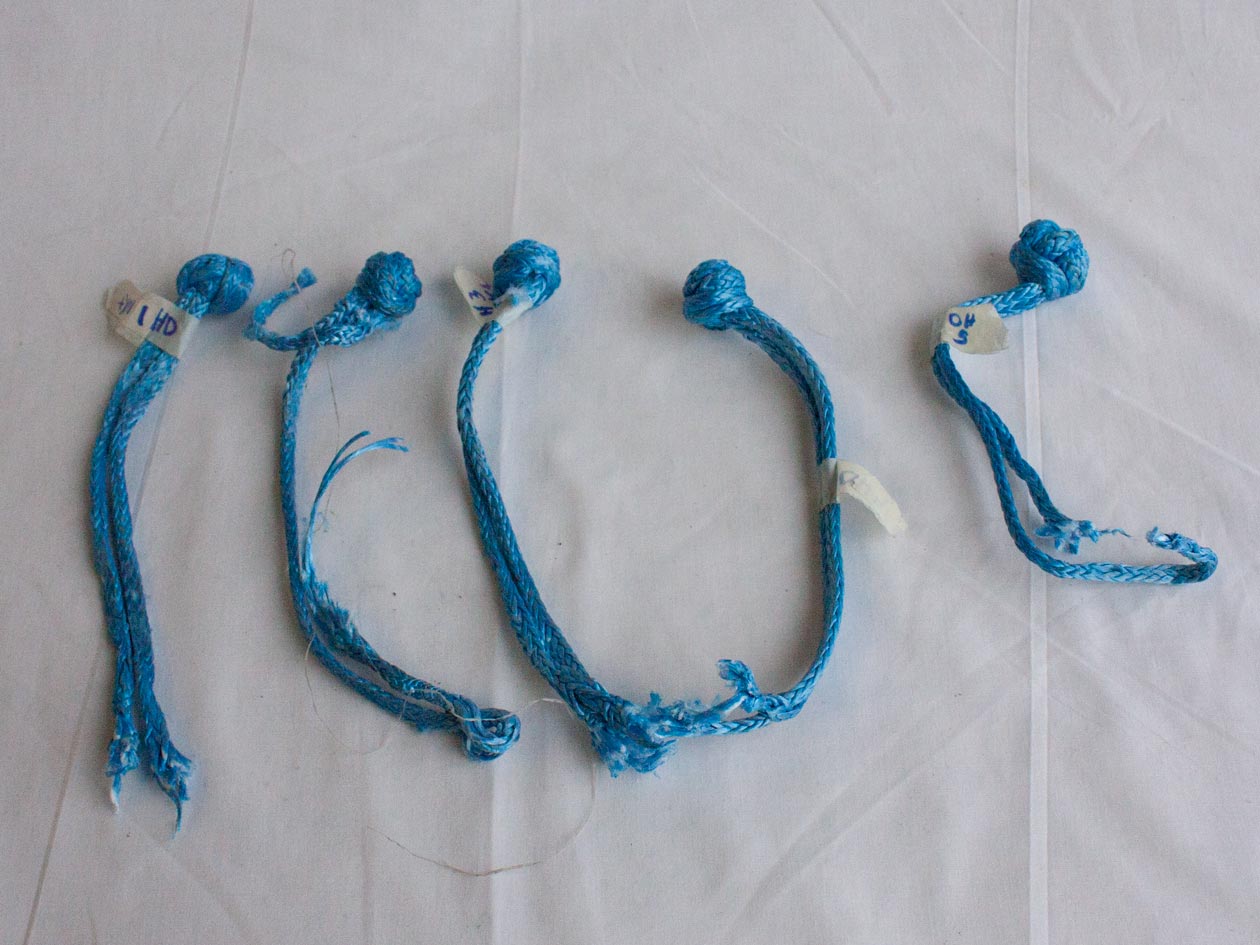 Climbers have traditionally used redundancy for metal objects rather than ropes/slings/etc. because a piece of metal can fail completely, and instantly, from one crack.

This is the same reason that we don't use gear that has been dropped, or has an unknown history: a microscopic crack might be there just waiting for a load to open it up. The same concerns are why cams and other pro are (used to be?) never welded, only brazed or soldered at the factory: welding introduces internal stress and microscopic cracks.

A sling or rope OTOH, is made of many flexible strands so cracks don't happen to them. Multiple strands mean they have built in redundancy. And when they get damaged from abrasion, cuts and UV exposure, we can see the damage. Multiple ropes and slings are really only used to protect against external threats - rock falls, sharp edges and bad pro.

Not the answer you're looking for? Browse other questions tagged gear rock-climbing climbing-anchors or ask your own question.

11
Anchor without cordelette?
4
Shortening a shoulder-length sling to half-length?
12
How should I choose between setting up a Cordelette or an Equalette climbing anchor?
14
Is a single strand of webbing unacceptable for climbing anchors?
5
How to use a static rope as a tether at the anchor of a top rope climb?
9
Sensible primary and secondary device combination for toprope soloing
3
Redundancy in rappel systems