At what point is a rattlesnake mature enough to control its venom?

Young rattlesnakes are more deadly than large rattlesnakes, the reason being because when they are young they are more likely to strike, but more importantly because they can't yet control their venom. As a result, when they bite, they inject all their venom instead of just a controlled amount.

At what point is a snake mature enough to control its venom? I know that rattlesnakes can't rattle until they've shed their skin a couple times, so does that mean if it can rattle then the snake is less deadly?

Ahh, I have been waiting for this. This answer would definitely be not much of a help if you hate complicated biology and physiology and related terms. But anyone who is equally interested in snakes is welcome to have a read through. While I am really sorry that I can't simply answer it as these many months or these many years, what I can explain here is a process through which a rattlesnake go to achieve the control on the quantity of the venom it injects.

In all venomous snakes, the venom is secreted and in a specialized gland: the venom gland, located along the posterolateral margin of the upper jaw. Posterolateral means situated on the side and toward the posterior (as called Dorsal, directed toward or situated at the back) aspect.

Venom is expelled from the gland when one of the surrounding skeletal muscles comprising the extrinsic venom gland musculature contracts hence releasing the fluid pressure within the venom gland. This system is closed, not open to ambient pressures.

Now this extrinsic venom gland musculature is a whole topic to study for years. Sticking to the Pit Vipers and specifically Rattlesnakes, you would need to know two of them for sure. One, Musculus pterygoideus glandulae and the other is Compressor Glandulae.

While the Compressor Glandulae originates from dorsolateral surface of the venom gland, the Musculus pterygoideus glandulae originates at pterygoidal bone. To easily explain you what this term mean, open a rattler's mouth, touch its upper jaw from inside.. thats Musculus pterygoideus glandulae. Do not do this actually! This muscle is associated with the movement of Fang Sheath. 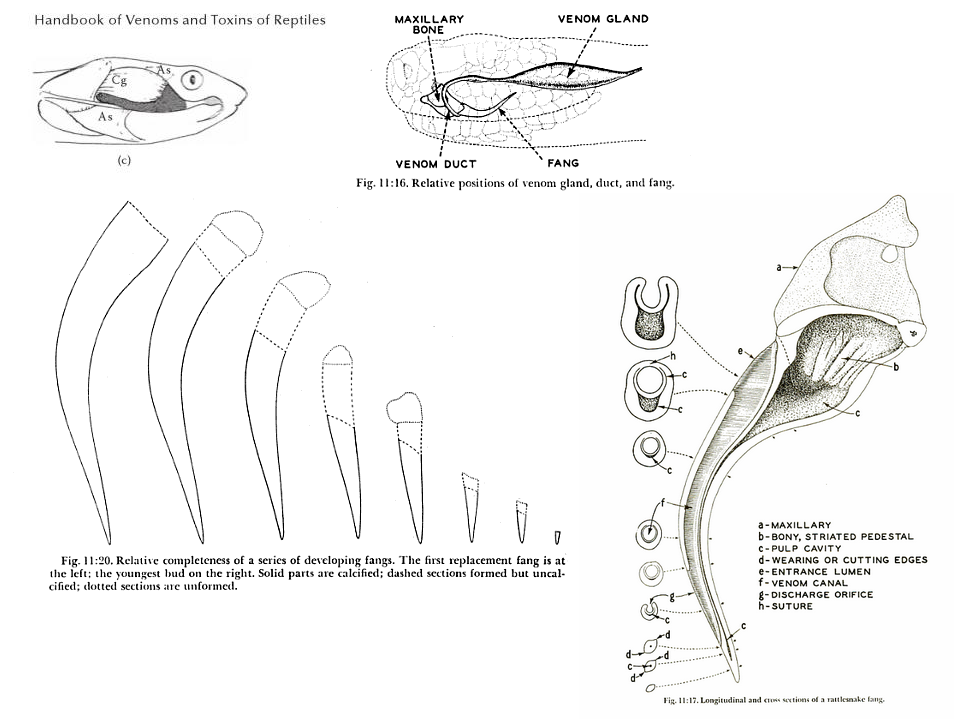 Coming to the fangs, these are folded against the upper jaw and are covered by Fang Sheath.

The secondary or additional Fangs grow despite of the presence of the primary fang, and at a certain point the primary fang is broken and replaced by the fang developed immediately behind it, covered in the sheath till this time. Growth rate of fangs is proportional to age of the snake, but it degrades in older state of life of the snake.

Referring to Rattlesnakes: Their Habitats, Life Histories and Influence on Mankind, Volume 1 by Laurence Monroe Klauber., Snakes can also control the venom through a fang independently. So if right fang injects a certain cc of venom, its not necessary that the left fang inject the same amount.

How does it do that?
You must have seen on Television that the handler presses around it's venom gland and the pits to extract more venom. Its not the gland they are pressing, Its the Venom Duct. This duct begins at the forward end of the gland which lies below the anterior edge of the eye, then passing forward below the pit and the nostril, slightly above and outside the Maxilla. Then it turns sharply downward to a point in front of the upper lumen of the fang. There is a sphincter in the venom gland by which a valve action is accomplished. This venom control is majorly through a mechanical control of the jaw, and hence controlling the Maxilla and the fang movement. As the jaw opens, the fangs are being made almost perpendicular to upper jaw, the sheath is pulled back by Musculus pterygoideus glandulae.

That was about How is it done. Graduating through this control process is a long span in the poor fellow's life, sometimes 3-4 months. The experiments shows that a 6 month old rattler went on to give nearly consistent cc of venom per strike.

27
Meeting an unknown snake on the trail; what is the best thing to do?

17
What should you do if you are bitten by a rattlesnake?
20
What do you do if the fire does get "out of control"?
9
Aversion to snakes: How would an outdoors leader go about "curing" this condition in one of her/his charges?
8
Titanium Carabiner: what is its ideal use case?
12
What to do when one point in a climbing anchor breaks?