What is the difference between accessory cord and prusik cord?

Aside from Prusik cord being a different weave, what's the big difference? When would I choose one type of cord over the other? Is there anything I shouldn't I use the different types of cord for? What's the significant difference? 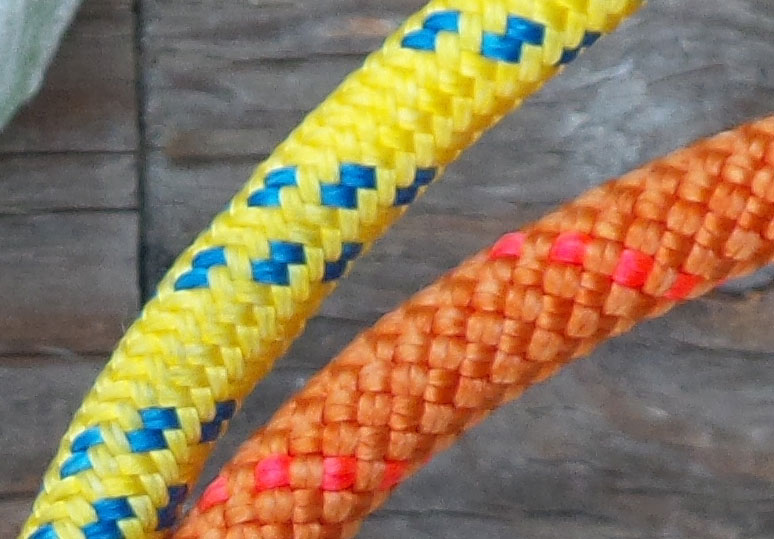 Based on the picture the OP presents, the yellow prusik cord weave has each pair of threads (likely not the correct term) passing over 3 or 4 threads rather than two. This doubling of length and corresponding reduction of crossing points seems likely to make the cord more flexible than the orange cord, a feature that will assist in making the tight wraps of a prusik or similar friction knot.

In actual climbing use I don't know of anything that would preclude using one in favor of the other for a given diameter or cord. The strength differences between different brands also vary far more than the differences between the two types of cord.

BlueWater Ropes sells both accessory and prusik cord in a variety of thicknesses. There seems to be a negligable decrease in specified strength for the "prusik" cord, also seen below in the Sterling cords. The product photos show a similar difference in weave as that seen in the OP's image. BlueWater says:

These use specific cords have a firm, yet supple hand and will hold higher loads before slippage than do traditional accessory cords.

Sterling Rope sells 8mm cord in both "accessory" and "prusik" cord variations. The only difference I see in their specifications is a 15.4 kN strength rating for the prusik cord, and a 15.6 kN rating for the accessory cord. (Effectively the same.) I don't see any differences in the weave, assuming they used the correct photo. They have this to say about the prusik cord:

The 100% nylon 8mm prusik cord has been specifically adapted from our 8mm accessory cord to be more supple [ed: emphasis added] and provide the best possible compatibility with rescue ropes in both 1/2? and the smaller 7/16? diameter. [ed: I assume the '?' was supposed to be the symbol for inches, further compounding their sin of mixing units.]

Not the answer you're looking for? Browse other questions tagged gear ropes prusik or ask your own question.

14
Trekking poles: what are the pros and cons of Anti-shock vs standard designs?
7
An adjustable length knot for 2 lines and a carabiner for easy suspension
12
How to arrange 2 Prusiks when ascending a rope?
13
Why all the different accessory cord diameters?
9
Abseiling on one rope: should I attach the prusik to the other one?
12
How do I know when to choose between a Klemheist or prussik knot?
15
Why are eye friction hitches not commonly used in rock climbing?
12
Paracord rope strength
1
Have a couple basic Q's on climbing-line (1 on safely descending/rappelling, another on using multiple lines and/or hardware to achieve "1+1=2"?)