Why do I never see robins in the woods?

I know that there might be robins in the woods that I just never see. But why don't I see any robins. I see lots of birds including chickadees, cardinals, and blue jays. There are Hawthorn trees out front where birds often go during the winter and there are worms in the woods. Robins love these. There is also mud in the woods and grass out front for a robin to make its nest. Sometimes during the spring I see grass and flowers in certain parts of the woods.

According to The Cornell Lab of Ornithology, American Robins are indeed found in wild places like woodlands, forests, and mountains. Because worms hibernate, the winter robins feed primarily on berries, found on trees and shrubs in the woods.

The Ohio DNR Division of Wildlife lists robins as native to Ohio. Some migrators travel through but there is a population that overwinters, in both urban areas and woodlands. They're shy and not easy to spot, which is probably why you haven't seen them, but it's worth looking.

It sounds like you're in a great spot! In fact, the Columbus and Franklin County Metro Parks Agency oversees 17 natural parks with 200 miles of trails and over 27,000 acres of land in Central Ohio, one of which is Inniswood park. The agency is headquartered in Westerville, so hopefully that's close enough by for you to check out the area. There are a number of places for bird-watching.

A group called Trek Ohio keeps records of where the robins overwinter in central Ohio. Sightings have risen into the thousands in Inniswood. They have an interesting article Ohio's Overwintering Robins. Here's a picture from that article. It's a robin foraging berries in the woods. 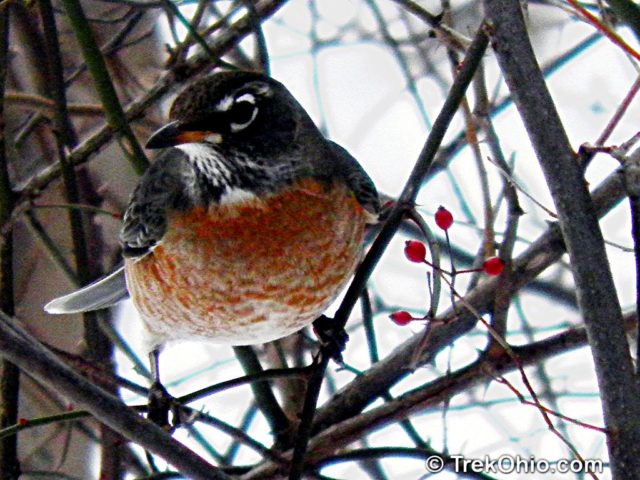 This one's from the Ohio DNR site referenced above: 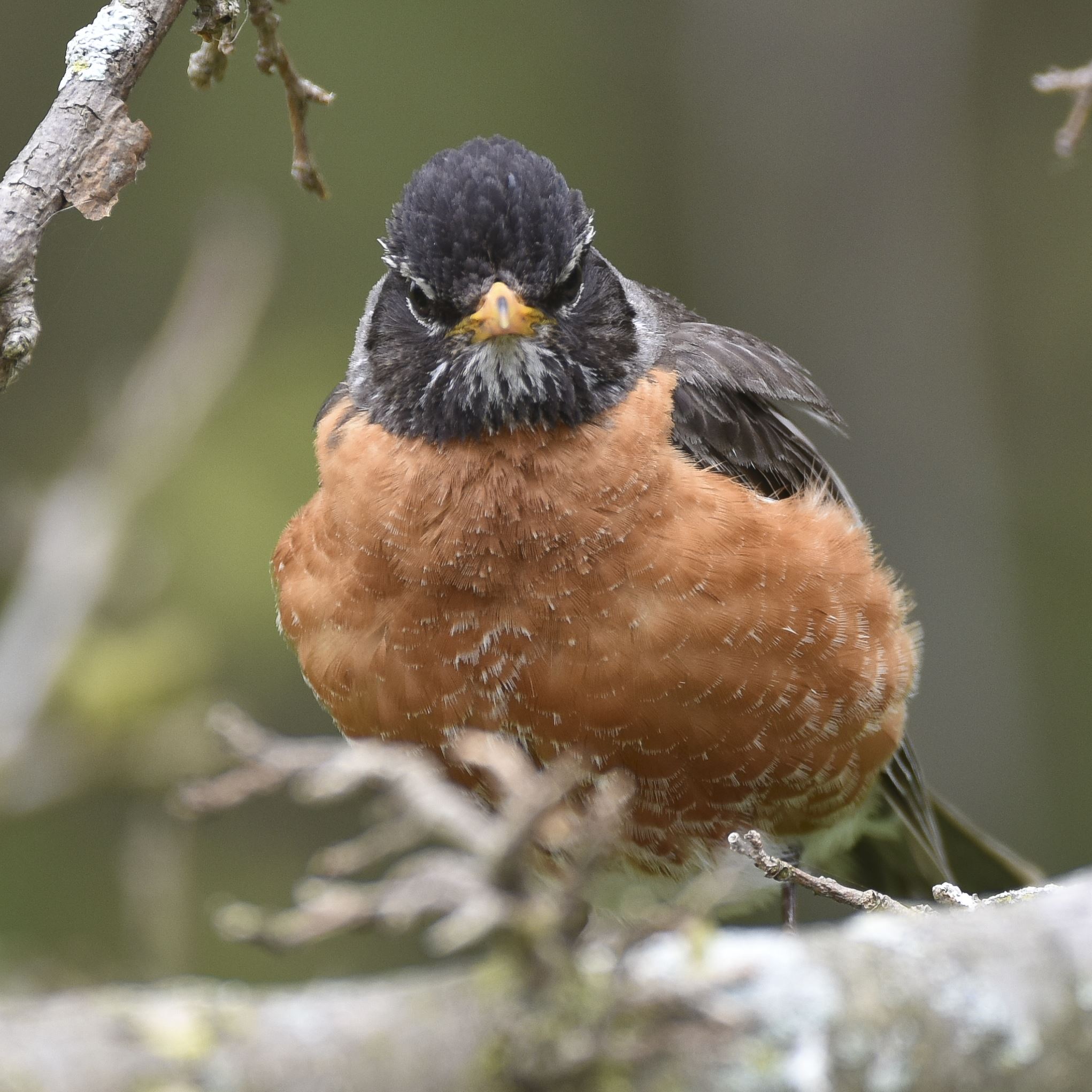 Get some binoculars, poke around, and let us know what you find!

I've certainly seen robins in woods (I'm in Scotland) but I've also noticed how much the populations of different bird species vary with location. There might just not be that many robins in your local woodland.

Edit: American robins and European robins are apparently quite different. However, my comment above is probably still valid.

You don't see robins in the woods for the same reason you don't see prarie dogs there either; it's not their habitat. Notice that most of the time when you see a robin, it's hopping along the ground in some open space, or in a tree near some open space.

Yes and no; As a breeding/home territory robins do not like thick woods. They prefer an open woodland typical of single home suburbs ( in US). They want some open ground for foraging. Goldfinches like similar open woodlands. However , I see the large migrating flocks of robins in the thick forest ( E TX, piney woods).These loose flocks contain many thousands of birds in a square mile or more of thick woods and suburbs - (The subdivision borders the National Forest). We are right on the southern border of the breeding range of the robins. In breeding season there are about 3 pairs in a radius of a few blocks but none nest on our street because it is the National Forrest boundary. They do come to my backyard for water. Not to ramble but: as a kid in Chicago," bird" meant robins or house sparrows to me , so I notice them.

22
Why do robins tilt their head to the side before pulling a worm out of the ground?
8
Why do I often see male robins with female robins?
9
What can I provide to help a robin build her nest?
10
What happens to the eggs after American robins are born?
5
Do American mourning doves only make their plaintive cooing sound where people can't see them?
6
What is the smallest owl in the world, and where can I see one?
10
What is this really tall grass-like plant?
7
Do backyard birds prefer birdbaths with moving water?
6
Why aren’t birds using these feeders?
9
Can dirty bird feeders make birds sick?