What to do if the second seems stuck and absolutely no communication is possible?

A few months ago, I experienced the following situation: We (two people) were climbing the last pitch of a multi-pitch route. Near the end, there was a cave-like chimney. Basically a chimney where the opening was narrower than the chimney itself, and the whole thing getting narrower towards the top.

When I lead that pitch, I had no problem going up, noticing that I had to leave the chimney because the top opening was too narrow for my helmet, downclimbing a meter and continuing on the outside. When I was belaying the second, she got stuck inside the "cave" because of her backpack with no way of going up, down or out. The whole situation looked a bit like this (left: side view, right: front view): 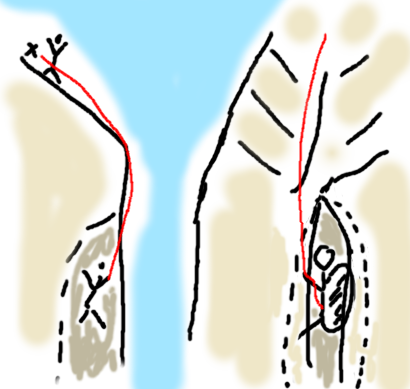 Our problem in that situation was that we absolutely couldn't communicate (cave roof between us, open sea to the back, so no echo), and I had no way of knowing what was happening down there. She finally solved the situation by letting go, falling for at most half a meter and then (with great difficulty) wiggling out of the cave. If I had known that she needed to be lowered like 1-2 m, the whole situation would have been solved in a minute, but like this, it took like 15.

While it worked out fine in our situation, what is the generally recommended way of handling a situation where the second seems stuck and absolutely no communication is possible? Also, what would have been the appropriate reaction of she hadn't been able to move?

This is mainly about how to handle such a situation if you haven't prepared specifically. However, recommendations about preparing for the case of such a situation are also welcome, if this doesn't make my question too broad!

Of course you want to try simple things first, and waiting is a really simple thing to do. She solved the problem in 15 minutes, which doesn't even seem like an especially long time to me to wait for a second to do a pitch. It could take that long to clean a stuck piece of gear. Another simple solution would be to bring radios in the future, but that doesn't help you in this case. I assume you didn't each have a cell phone in your pack.

If you've exhausted the simple options (say it's been an hour and nothing is happening), this becomes more of a self-rescue situation, and self-rescue is based on improvising a solution using the gear you have and the techniques you know. Often in self-rescue, lowering the climber is the easiest solution. It would have worked here, but you had no way of knowing that, and it could have been dangerous to lower. So...

If you were giving her a direct belay, then tying off the belay is trivial. If you were belaying off of your harness, then you need to know how to escape the belay, which is an important and fundamental self-rescue skill to practice.

If you had less than half the rope out, then you could rappel down on a second strand to see what was up. However, you would need to formulate a plan to make sure you could get back up without having to solo the route, e.g., using a Prusik. The decision whether to attempt this might depend on the difficulty of the route. Because you can't extract your belay device from the system, you would need to do the rappel using an alternate technique such as a Munter.

Another option might be to go and get help. Obviously that has disadvantages, but it beats attempting a self-rescue by a sketchy method that might get you killed. One of the basic rules of first aid and self-rescue is not to create additional victims.

All of Ben's comments are great, but they mostly deal with what you could do once you are in this situation. Avoiding the situation all together might be easier than you think though and likely the better option.

To do so, you would just need to extend your belay, or simply put - don't belay from the over the lip, belay at it.

This is a technique I employ a lot, especially when guiding, but even when not, and if you're swinging leads or topping out, it really doesn't eat up any additional time.

There is an article on climbing.com that I've borrowed this image from (also linked below), but essentially you establish an anchor, lower & tie off where you want to belay, then either establish a new intermediate anchor at that point using the rope, or set up a redirected belay using the top anchor.

At minimum you should try have audible communication, but it's good to strive towards have visual (line of sight) on your climber also.

Source: Extending an anchor on a multi-pitch route.

There is not much to add to Ben Crowell's great answer, just one point. So the next paragraph is merely a short version of his answer, skip to the second if you do not want to read it.

If you have a good reason to believe that the second is not badly injured, lowering would be the first thing to try. Just slowly and not much at first. Climbing the wrong way and getting stuck without a way out due to being pulled by the rope is quite a common thing to happen. If that does not resolve the situation just as mentioned, proceed as in an improvised rescue: Start improvising. If you have enough rope, lower yourself down to establish contact.

If you cannot abseil far enough as the rope is too short, you can lower on the rope the second is climbing on. Just use the exact same technique as in ascending on a rope: Two blocking knots, one attached to your harness, the other as a descending aid. Non strategic protections can just be unclipped, otherwise you may need to do a blocking knot below and then untie the one on top, but with some fiddling you might even slide it through the biner of the protection. It is slow, cumbersome and tiring, but an option to descend on a taught rope if nothing else works. Just be careful if the rope is forced against the rock: Trying to get your blocking knots past such an area may get you stuck and thus block you.

25
What are the key differences between Mountaineering and Rock Climbing?
13
How do I recognise quicksand and how do I get out if stuck?
15
Toproping with two ropes joined by a double fisherman's
16
Placing protection efficiently when leading trad?
11
"Tag line"/"pull cord" for multipitch trad: what kind and when needed?
10
Donating blood at higher altitudes and Acclimatization
26
How should I vet belayers? What should I look for?
12
(Why) Should I hold the rope when belaying the second climber with Reverso?
12
Relative risks of various outdoor activities?